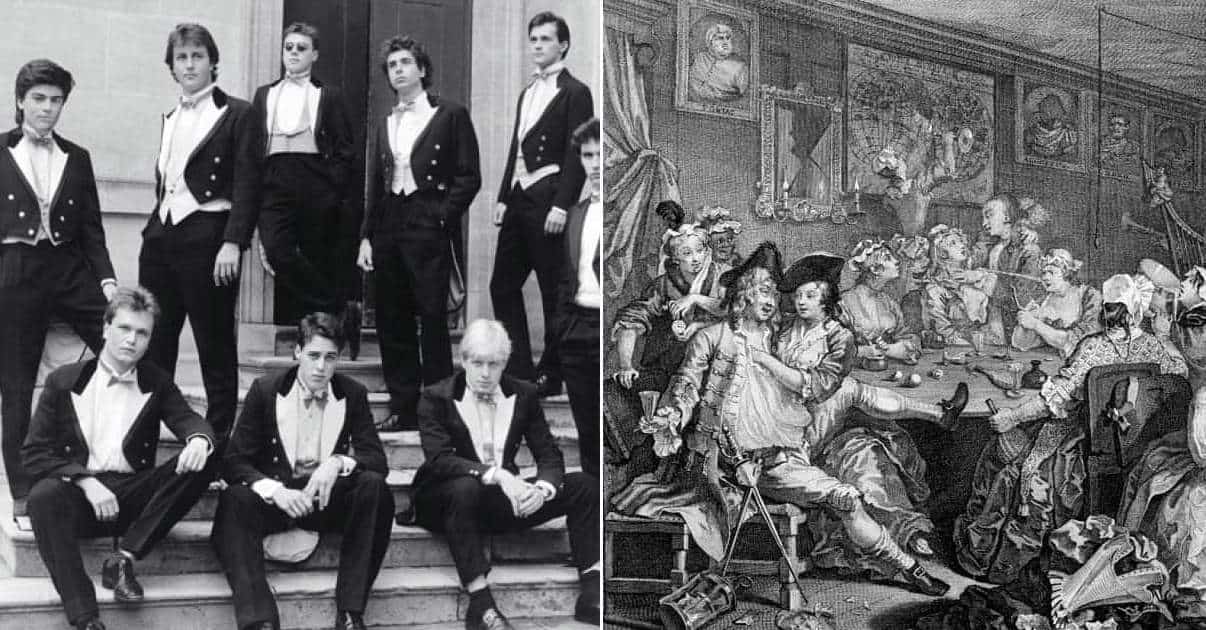 Boris, Dave, and George: The Power of Networking

If you assumed that the Bullingdon’s power had waned since the aforementioned were elected, you’re in for a shock. In 2008, the Bullingdon class of 1987 reunited at the Millbank Tower, Westminster, to raise funds for one of its most illustrious members, Boris Johnson, who at the time was running for Mayor of London. Amongst the assembled group were Sebastian Grigg, chief of UK investment banking at Credit Suisse, along with David Cameron, leader of the Conservative Party and readying for the 2010 general election. Boris’s mayoral campaign was successful, and David Cameron was elected Prime Minister in 2010.

The intimate network of the Bullingdon remains a force in UK politics, as the 2008 meeting demonstrates. Remember the three members who escaped from the police after vandalising a restaurant in 1987? Two of the young men ensconced in shrubbery were Boris Johnson and David Cameron. Mutual indiscretion clearly forges strong bonds, and it is theorised that the club’s arbitrary criminal acts are to ensure that members can be cajoled and blackmailed by one another. Indeed, when Cameron came to assemble his cabinet, he chose as his chancellor George Osborne, another Bullingdon alumnus, and welcomed Boris too in 2015.

Bullingdon connections got Boris into power, and along with Jonathan Ford, a former member and editor of the Financial Times, he was instrumental in Cameron becoming Tory leader and eventually Prime Minister. If the thought of three Bullingdon men more or less running the country shocks you, it gets worse. Boris has been publically observed to greet other former Bullingdon members with a bellow of ‘Buller, Buller, Buller’ and a laddish embrace and, along with Osborne, is known to have attended Bullingdon events in recent years. Boris is also swift to remind members of their vow of omertà.

Although their Bullingdon past has been fundamental to their rise to power, all three men have tried to distance themselves from the club. Publication of the photo above, and another of the younger Osborne in 1992, was suppressed for as long as possible by the Conservative Party. Cameron’s attempts to play down his involvement with the Bullingdon must be offset with the fact that he prepared for becoming Prime Minister by serving as club president from 1988. Even Boris has publically criticised the club, calling the notorious photo ‘a truly shameful vignette of almost superhuman undergraduate arrogance, toffishness, and twittishness’.

Although Cameron and Osborne have now left politics, there are, at present, two members of the Bullingdon in the Conservative cabinet: Boris, now Foreign Secretary (mind-boggling, given his famous xenophobia), and his younger brother Jo Johnson, the Transport Minister. Jo was in the Bullingdon at the same time as George Osborne, and they remain close friends. Buller-ties, however, are not indissoluble. Boris and Cameron differed on Brexit, with the latter in favour of EU membership, and Boris an outspoken campaigner for the Leave campaign. After the vote, Cameron resigned, leaving Boris to mount an unsuccessful leadership campaign of his own.

With all of the shocking facts above in mind, it is no surprise that the Bullingdon has been widely condemned over the years. Indeed, ‘Bullingdon’ has become a by-word for upper class corruption, misbehaviour, and cronyism. The most prolific and, to the author’s taste, best, critic of the Bullingdon Club is the novelist Evelyn Waugh (1903-1966). Waugh was a talented student who won a prestigious scholarship to read history at Hertford College, Oxford. After a promising and studious start at Hertford, Waugh befriended two Old Etonians, Harold Acton and Brian Howard, and swiftly adopted their decadent and alcohol-drenched lifestyle.

So dissolute became his life that Waugh lost the scholarship and left without a degree. However, his experiences helped him to write his wonderful first novel, Decline and Fall, the satirical tale of Paul Pennyfeather, a poor scholar sent down in ludicrous circumstances who ends up embroiled with the upper classes and going to prison for white slavery. The event that leads to his downfall is an encounter with the fictional Bollinger Club, who ‘debag’ him (remove his trousers) in the college quadrangle after a club dinner. Pennyfeather is expelled for gross public indecency, while the aggressors are merely fined.

On the night of the Bollinger dinner, Waugh describes two college fellows cheering every sound of breakage and dreaming of the amount they can fine the offenders. The book was published a year after the famous window-breaking at Christ Church in 1927, and both fictional and actual punishments are equally meagre. Pennyfeather, rather than the Bollinger, is expelled because of his limited wealth: Waugh’s biting depiction suggests that the university’s tacit toleration of the Bullingdon is linked to their families’ prestige and wealth. The novel ends as it begins, with Pennyfeather witnessing another round of trashings after a Bollinger dinner.

Decline and Fall is an exuberant farce, but Waugh discusses the more serious side of the Bullingdon in Brideshead Revisited, which actually mentions the Bullingdon by name. The semi-autobiographical Brideshead tells the tale of the decline of the Flyte family across two decades. In one scene, Anthony Blanche recounts how the Bullingdon tried to ‘put him in Mercury’ in Christ Church’s Tom Quad, which is not so playful as it first sounds. Although not a Buller member, Lord Sebastian Flyte’s decline into alcoholism and seclusion is most à propos depiction of the result of decadence suffered by many former members.

Posh, Laura Wade’s multi-award-nominated play, is the tale of a fictionalised-Buller called ‘The Riot Club’, and takes place on the night of a club dinner at a country pub probably based on the White Hart trashing of 2005. A ham-fisted 2014 film adaptation of the play, The Riot Club, exaggerates the set piece of the landlord being knocked-out by the panicked group to grotesque thuggery, which even critics of the Bullingdon labelled an unfair accusation, since real club members chiefly fight only each other. Waugh’s Decline and Fall was also adapted for screen by the BBC in 2017.

“Bullingdon Club Too Lively For Prince of Wales”. The New York Times, 1 June 1913.

Mount, Harry. “An obituary for the Bullingdon Club, by one of its old boys”. The Spectator.

Rotberg, Robert I. The Founder: Cecil Rhodes and the Pursuit of Power. Oxford: Oxford University Press, 1988.

Snead, Florence. “‘I’ve got a better castle than you’: Bullingdon Club student suspended from young Tories” I News.