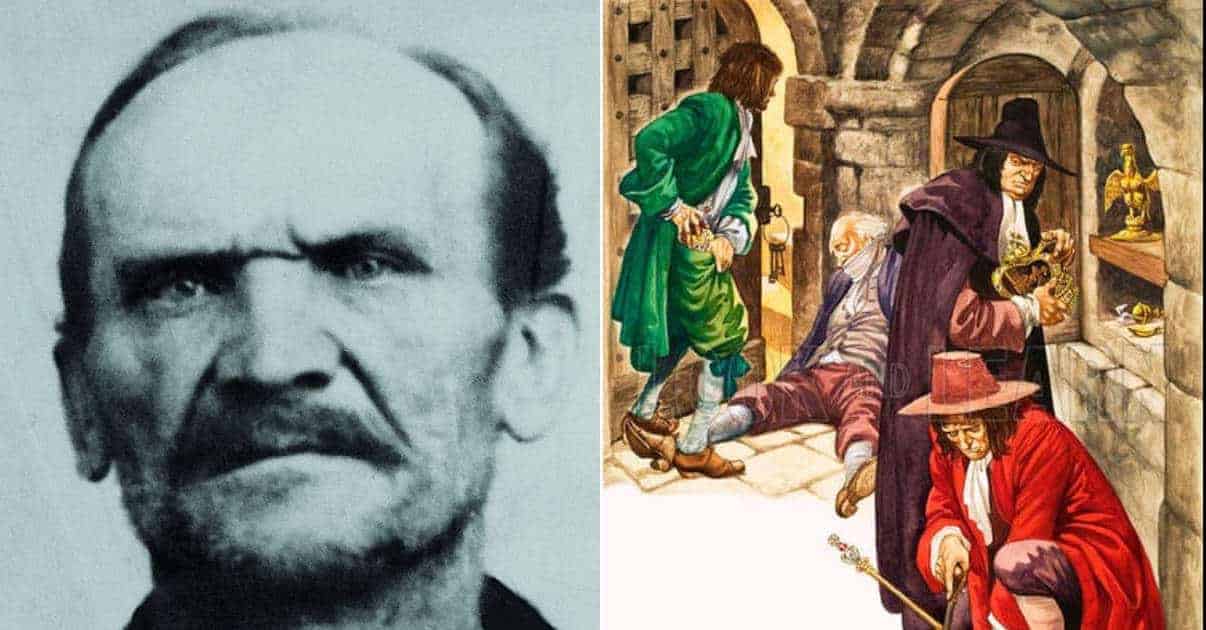 Margaretta Peter was born into a large Swiss family around 1794, and from an early age, displayed remarkable religious zeal. By age six, she was a preaching prodigy who captivated congregations with impassioned sermons, revealing a better grasp of the Bible than many grown ministers. She had a strong personality, and spiritually dominated her family and neighbors, turning them into her disciples.

At age 20, Margaretta announced that she was a prophetess, and established a small congregation in her village. She also took to wandering and preaching, gaining a reputation and following across Switzerland. In 1823, Margaretta began harping on Satan, warning her followers that he was all around them. Soon, she was experiencing prophetic visions of demons taking over the world.

Then one day, she told ten devoted followers to gather weapons and pray, because the final battle between Satan and Jesus was about to begin. On her instructions, they gathered axes and clubs and whatever weapons they could find, and barricaded themselves in a farmhouse attic. She told them that invisible demons had surrounded the house, then shrieked that they had broken in – at which point Margaretta’s followers began wildly swinging their weapons at imaginary devils only she could see.

That went on for hours, during which they destroyed the attic. Then they descended to the ground floor, and began hitting each other, on the theory that pain would ward off the demons. They kept at it until neighbors finally called the police, who arrived to find Margaretta’s followers senseless on the floor, while she continued pummeling them.

The following day, Margaretta told her congregation that more pain was needed to fend off the Devil. She then grabbed an iron wedge and began bludgeoning her brother, while her followers resumed beating each other up. Margaretta then announced that her dead mother’s ghost ordered her to sacrifice herself, but her sister stepped up and insisted that she be sacrificed instead. Margaretta accepted and began beating her sister with the iron wedge. The rest of the congregation joined in, and soon, the sister was dead. When a follower protested, Margaretta assured her that her sister would rise from the dead in three days.

Margaretta then ordered her followers to crucify her. They were reluctant at first, but she assured them that she would return to life in three days. So they made a cross, and with Margaretta urging them on, nailed her to it by her hands, elbows, feet, and breasts. She then ordered them to stab her through the heart. They tried, but couldn’t get it right, so they took a hammer and crowbar and smashed her head.

Then the congregation gathered around the bodies, and prayed while waiting for them to come back to life in three days. Needless to say, three days came and went, but the dead Margaretta and her dead sister stayed dead. Her disciples were tried for murder, and eleven were convicted and given prison sentences ranging from six months to 16 years.

Barbara Ann Woods, a Canadian living in the Toronto suburbs, was the mother-in-law of Kenneth James Park. In 1987, her son-in-law was a 23 year old, happily married to Barbara Ann’s daughter. The young couple had recently given Barbara Ann an infant granddaughter, upon whom her relatives doted. However, all was not well with Barbara Ann’s son-in-law.

Kenneth suffered from insomnia and stress, and was going through a rough patch because of a gambling addiction that drove him into debt. Barbara’s son-in-law embezzled money from his employer, hoping to make some winning bets that would allow him to pay off his debts, then return the money before it was discovered missing. He bet on the wrong horses, lost it all, and the embezzlement was discovered. Barbara’s son-in-law was fired, and his employer filed charges. Things got so bad that he stole from his family’s savings account.

Despite all that, Kenneth had the good fortune to be on excellent terms with his in laws, and Barbara Ann referred to him as her “gentle giant”. In the early morning hours of May 24th, 1987, her gentle giant got out of bed and drove 15 miles to his in laws’ home. Upon arrival, he got a tire iron out of his car’s trunk, and broke into the house. There, he assaulted his father-in-law and choked him unconscious. He also beat Barbara Ann Woods with the tire iron, and stabbed her to death with a kitchen knife.

He was charged with murdering Barbara Ann, and attempting to murder her husband. Kenneth’s defense was that he had been unaware of his actions because he committed them while asleep. Sleep specialists were skeptical that somebody could get in a car, drive it 15 miles, get out and kill somebody, then get back in the car and drive it to a police station, all while asleep. However, the specialists could find no other explanation and eventually concluded that it was possible that Kenneth had been asleep.

In the trial, the defense emphasized Kenneth’s lack of motive, the history of excellent relations with Barbara Ann and her husband, and the consistency of his story during numerous interviews. Also, his brain’s electromagnetic activity readings were extremely irregular, even for people suffering sleep disorders, and such readings were impossible to fake. That convinced the jury, which acquitted him of all charges.

Aristocrat Steals King’s Wife, Then Murders Him With a Red Hot Poker in the Rear

Roger Mortimer, 1st Earl of March (1287 – 1330) was a powerful English nobleman who fell out with king Edward II over the king’s maladministration and employment of corrupt royal favorites. Mortimer led a baronial revolt, but it was crushed in 1322, and he was imprisoned in the Tower of London. He eventually escaped and fled to France, where he began plotting payback.

Edward II was an all-around poor king. However, what probably damaged his authority the most was the widespread perception that was a homosexual, and an effeminate one at that, in a hyper-macho era. He had a habit of promoting his male lovers to positions of power, which said lovers then abused, to the disgust of the realm. His latest lover, Hugh Despenser, fit that pattern.

Worse, Edward engaged in public displays of affection for Hugh, which humiliated and alienated Edward’s queen, Isabella. That was all the opening Mortimer needed. While Isabella was on a diplomatic mission to Paris in 1325, Mortimer met and seduced her, and she became his mistress. In 1326, the couple invaded England, executed Hugh Despenser, and deposed Edward II. In his place, they installed Edward’s 14-year-old son, who was crowned Edward III in January 1327, with Mortimer as regent.

Mortimer heard of plots to rescue the deposed king, so had him relocated to a more secure site. Additional reports of fresh plots to free Edward caused Mortimer to order him to move to various locations during the spring and summer of 1327. The fear that one of those plots might finally succeed eventually decided Mortimer on a permanent solution. He would put Edward II beyond rescue, by having him killed.

Contemptuous of Edward and his perceived effeminacy, and not wishing to leave marks of murder on his body, the killers decided on a gruesome method of execution. They held him down, and inserted a red hot poker up his rear to burn his bowels from the inside. Another version has it that a tube was first inserted in his rectum, then a red hot metal bolt was dropped down the tube into his bowels. Either way, Edward II’s dying screams were reportedly heard for miles. Mortimer retained power as regent until 1330, when Edward III decided he was old enough to rule, seized Mortimer, and had him executed.

The Murder of the Mad Monk

Grigory Yefimovich Rasputin (1872 – 1916) was an illiterate Siberian peasant, mystic, and charlatan faith healer. He had an inexplicable ability to soothe the suffering of the Russian Tsar’s young son and heir, who suffered from hemophilia. That won Rasputin the favor of his imperial parents. That favor made Rasputin an incongruously powerful and influential figure in the Russian Empire’s final years.

Rasputin – Russian for “the debauched one” – had a reputation for licentiousness since his teens. At 18, he studied at a monastery and joined a flagellant sect, but perverted its beliefs by inventing a doctrine that nearness to God is best achieved by “holy passionlessness”. The best way to get there, according to Rasputin, was via sexual exhaustion after prolonged bouts of debauchery by the entire congregation. That would get all the base passions out of their system, and allow them to focus on God without distractions.

He became a wanderer, living off donations and gradually building up a reputation as a holy man who could predict the future and heal the sick. He ended up in Saint Petersburg in 1903, at a time when mysticism was fashionable with its decadent court and high society. Rasputin, the dirty, smelly, holy peasant with brilliant and captivating eyes and a reputation for faith healing, was a hit. He exerted a powerful animal magnetism upon high society women, and soon had a cult following of wealthy aristocratic women throwing themselves at him like groupies at a rock star.

One of them introduced him to the Tsarina Alexandria, whose son suffered from hemophilia. Rasputin was able to soothe the child’s suffering, which earned him the mother’s fierce loyalty. Soon, the royal airhead was convinced that Rasputin was guided by God. She started soliciting the illiterate charlatan’s advice on matters of state, then badgered her weak-minded husband, the Tsar, into implementing Rasputin’s recommendations. Before long, ministers and high officials were being appointed and dismissed based on Rasputin’s advice. Those seeking to advance or secure their positions were soon flocking to offer him lavish bribes or sending their wives and daughters to sexually seduce him into putting in a good word for them with the Tsar and Tsarina.

That scandalous state of affairs made the Tsarist government a laughingstock and brought it into low repute, but the Tsarina remained fiercely protective of Rasputin. So a group of aristocrats, led by Prince Feliks Yusupov, husband of the Tsar’s niece, decided to assassinate Rasputin and rid Russia of his malign influence. His murder turned out to be as weird as his life had been.

Rasputin was lured to Yusupov’s palace on the night of December 30th, 1916, on the pretext of meeting Yusupov’s wife, who was interested in “knowing” him. Many nobles had offered their wives and daughters to Rasputin before, so the invitation was not suspicious. At the palace, while waiting for Yusupov’s wife to “freshen up”, Rasputin was offered cakes and tea laced with cyanide. He ate and drank with no ill effects. He was then offered poisoned wine. He quaffed it without a problem, asked for another glass, then one more after that.

Exasperated, Yusupov then retrieved a pistol and shot Rasputin in the chest. Believing him dead, the conspirators then went about covering their tracks, only for Rasputin to rise hours later and attack Yusupov, who managed to free himself and flee up the stairs. Rasputin then left via the palace court yard, where the panicked conspirators caught up with him and shot him again. They then wrapped his body in a rug, cut a hole in a frozen river’s surface, and shoved him inside. When his body was eventually recovered, it was reported that it had not been the bullets or poison that had killed him, but drowning – he was presumably still alive when thrown into the river.

Historic UK – The Theft of the Crown Jewels

Ancient Origins – The Bizarre Crucifixion of Margaretta Peter: The Short Life of a Prodigy and Devoted Christian

History Collection – Ten Crazy Facts You Do Not Know About Rasputin