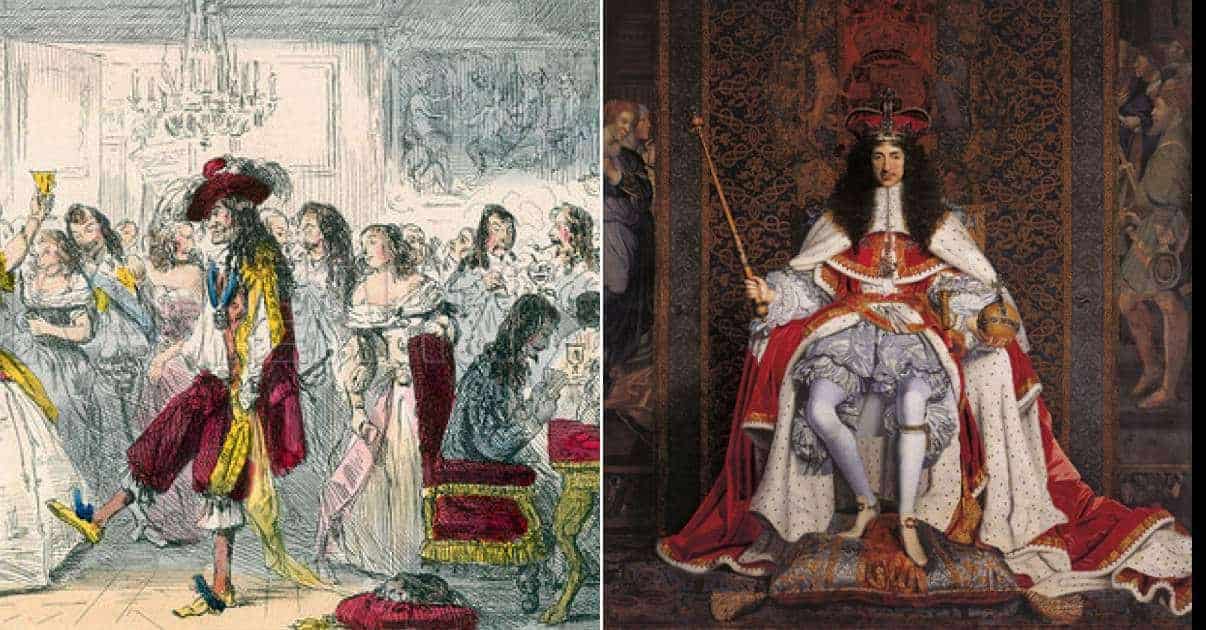 After his father was executed at Whitehall in 1649, Charles II went on the run to avoid the same fate. Eventually, he returned to England to take his seat on the throne in 1660. He was to rule for a quarter of a century but rather than come back in a blaze of glory to lead his nation into a glorious future. But Charles had other things on his mind… mainly sex.

Lots and lots of sex in fact; and the people of his court were only too happy to follow in his footsteps. Even by the standards of European courts at the time, Charles’ was particularly licentious as he preferred mistresses to meetings.

The trouble with the ‘merry monarch’ was that his bawdy behavior bled his treasury dry and resulted in humiliating setbacks in warfare. During his hedonistic reign, Charles slept with innumerable women, spent lavishly and didn’t seem to care about ruling. That he survived on the throne as long as he did was pure luck as previous monarchs had been murdered for far less. The courtier John Evelyn once said that Charles would have been an excellent king “if he had been less addicted to women” and the word ‘addiction’ is very apt when discussing the king’s relationships with the fairer sex.

In 1646, the 15-year old Charles fled England due to concerns over his safety as the tide of the English Civil War had turned against his father, Charles I. Young Charles had apparently accompanied his father at the inconclusive Battle of Edgehill in 1642 and was involved in several military campaigns.

When he fled, he went to several places before settling in France. By this stage, his father had surrendered and was in captivity. Charles moved to The Hague in 1648 during the Second English Civil War, and it was here that his philandering began in earnest. Charles had probably lost his virginity aged 15, but his first real relationship was with a woman named Lucy Walter in 1648.

They had a son together, and while Charles was happy to remain by her side, his friends derided her as a ‘whore,’ and he succumbed to peer pressure by leaving Lucy and the child. Then he took the child away from her and placed his boy under the care of his mother, Henrietta Maria of France. Lucy had a miserable life thereafter and reportedly became a prostitute in Paris to make ends meet. She died there in 1658.

Charles returned to England to try and regain the crown his father had once worn but his plan failed, and he had to sneak out of the country in disguise in 1651. He landed at Normandy in France in October and spent most of the next few years wining and dining in various European courts. Charles supposedly filled his days drinking, womanizing, sailing and horse riding. After another failed attempt to regain the throne at the Battle of the Dunes in 1658, Charles finally seized his opportunity in 1660 after the English Parliament voted to restore him to the throne. In Charles’ mind, the party was only beginning.

The scene that unfolded at Whitehall Palace in 1662 was indicative of Charles’ behavior. He had recently married Catherine of Braganza, and a royal parade followed the new queen as she moved from Hampton Court amid much pomp and circumstance. Charles watched the procession unfold from the roof of his banqueting house… with his mistress, Barbara Villiers, Countess of Castlemaine. It was clear that Charles didn’t give a thought to appearances as he routinely flaunted his many mistresses in front of his queen, courtiers and the people.

Unlike other monarchs who viewed certain classes of women as ‘beneath them,’ Charles was an equal opportunities womanizer. His servant, William Chiffinch, was known as ‘The Royal Pimpmaster’ and brought his king ‘actresses’ and prostitutes. At one point, it seemed as if Queen Catherine would die because she became gravely ill. There was talk that Charles would marry Frances Stuart, but the queen survived and outlived her husband by 20 years. Charles was pestered by his court to divorce Catherine and marry Frances, but on this occasion, he didn’t bow to peer pressure.

It is likely that Charles had up to 15 mistresses along with the litany of casual dalliances he engaged in. It is impossible to know how many illegitimate children he had, but one would imagine it would be at least a dozen given his numerous conquests.

One of the things Charles liked doing almost as much as sleeping with women, was spending money. To say he was a lavish spender would be something of an understatement. When he became king in 1660, Parliament granted him an annual income of £1.2 million to run the government; a sum that should easily have been enough, but Charles contrived to overspend to an incredible degree. The actual revenue of the government was significantly lower than what Charles spent, so Parliament had to institute unpopular measures such as Hearth Tax to make up for the shortfall.

Barbara was arguably the biggest spender in the entire kingdom. The king’s mistress lived in beautiful palace apartments, and she gleefully accepted his expensive gifts. Not only that, but Charles almost wrote her a blank check by allowing her to take funds destined for the exchequer. For example, she received an estimated £25,000 a year (the equivalent of at least three million pounds today) from Beer Tax, Customs Duties and Post Office Revenue alone; but that was the tip of the iceberg.

One evening, Barbara reportedly lost £25,000 playing cards; Charles picked up the tab. Clearly, Charles didn’t care about the people and was happy to spend at their expense. However, he foolishly didn’t realize that a kingdom needs money for defense and expansion. Within a few years of becoming king, an event occurred that nearly destroyed Britain and claimed his crown.

Britain had been involved in a conflict with the Dutch in the 1650s and tensions mounted once again when the British tried to take hold of Dutch possessions in North America and Africa. The result was the beginning of the Second Dutch War in 1665 which began well for Britain as it captured New Amsterdam and renamed it New York in honor of James, the Duke of York (later James II), who was Charles’ brother and philanderer-in-chief.

By 1667 however, Britain had run out of money and was unable to pay the ships’ crews or refit the fleet. Charles requested another £1.5 million from Parliament, but it replied by asking what had happened to the previous £5 million allocated to the exchequer. Charles didn’t respond as an estimated £2.3 million was unaccounted for.

Charles then made a terrible decision by laying up most of his fleet in the Medway River. The Dutch couldn’t believe their luck and launched a massive attack on the docked fleet. The Dutch had been spotted near the Thames Estuary in June 1667, but the king refused to act. During the ensuing Raid on the Medway, which took place over five days, the British Royal Navy suffered one of its worst ever defeats. At the time of battle, Charles was frolicking with Barbara and his other mistresses.

The people were finally fed up and an angry mob formed in London. Charles desperately looked for scapegoats and laid the blame on Lord Clarendon who was dismissed and impeached for high treason. As this act carried the death penalty as punishment, Clarendon fled to France where he died in 1674. Fortunately for Charles, the Dutch believed a stiff British resistance was forthcoming, so they withdrew. However, Britain had to sign the Treaty of Breda.

The Death of Charles II

Charles learned nothing from his close shave as he continued on his merry way. Barbara’s tenure as his main mistress came to an end in 1670 when his eye fell on Louise de Keroualle during negotiations with the French. In typical fashion, Charles put his needs over that of his country by delaying talks so that he could see Louise more often. She became his maitresse-en-titre the following year and just to spare his wife’s feelings, Charles held a huge two-week long celebration with Louise and his entire court. They even had a mock marriage at the end of the festivities.

To the surprise of no one, Charles was infected with venereal disease in 1674. Indeed, this disease was so common in his court that a ‘pox’ doctor was on constant call. He remained with Louise for the rest of his life, and during the next 15 years, she made sure that her country’s interests were well served. Charles stood by and allowed France to take Dutch territory, and he even offered not to call parliament again without the agreement of the French King, Louis XIV.

Barbara had returned in 1682 and managed to gain the king’s favor once more. In many ways, King Charles II died as he lived, in the company of women. He enjoyed a party with Barbara, Louise and a recent addition by the name of Hortense Mancini early in 1685. The following morning, on February 2, he suffered a sudden apoplectic fit and died four days later. Just before he died, Charles implored his brother, James, to look after his mistresses. Charles never matured into a good or even competent ruler; he became addicted to the pursuit of pleasure early in life, and when his country needed him to lead, he simply wasn’t able.