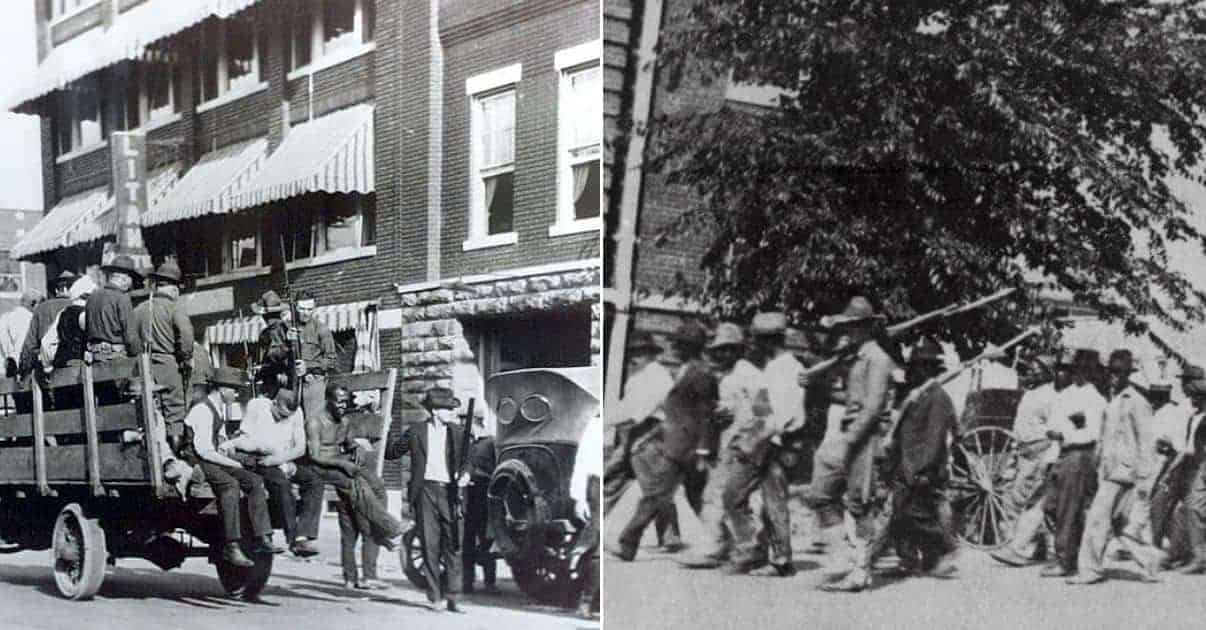 A special Grand Jury convened on the ninth of June and over the next 12 days heard testimony from witnesses. The Grand Jury was all white, as disenfranchised blacks could not sit on juries. The result of the testimony was a decision by the Grand Jury that the riot was caused by the blacks who had come to the courthouse. The responsibility for the riot and the resulting loss of life and damages was thus placed on the black community. The grand jury also faulted the Tulsa police for not preventing the riot.

According to the Grand Jury’s official report, issued on June 25, “We find that the recent race riot was the direct result of an effort on the part of a certain group of colored men who appeared at the courthouse on the night of May 31, 1921…” The statement went on to say, “The assembly was quiet until the arrival of armed Negroes, which precipitated and was the direct cause of the entire affair.” The Grand Jury handed down 85 indictments for actions occurring during the riots. Prosecutors brought charges in 27 different cases but in the end, nobody was convicted of any crimes involving the riots or the events which led up to them.

The charges against Dick Rowland, who spent the period of the riot in the secure jail within the County Court House, were dismissed in September. Sarah Page declined to press charges and prosecutors dropped the case. Speculation over what happened led some to believe that Rowland tripped and reaching out to support himself accidentally grabbed her, causing her to let out a startled scream. Others speculated that Rowland and Page knew each other and that they were in fact lovers, but there is no evidence of that beyond salacious gossip. Rowland left Tulsa following his release and exoneration.

No further investigation or action by the City of Tulsa or the State of Oklahoma took place for decades, other than attempting extradition of former leaders of the Greenwood community to try them for inciting the riot. In 1996 Oklahoma established a special commission to investigate the riot and make recommendations to the legislature as necessary. The commission worked for several years before delivering a report which included several recommended actions, including the payment of reparations to survivors of the riot or their descendants, as well as the establishment of the scholarship funds for the descendants of riot victims.

Oklahoma’s legislature passed an act which provided for some, but not all, of the commission’s recommendations in 2001. Reparations were not included. Other legal actions have been initiated by some descendants of survivors. For many of the survivors of the riot, there was neither legal recourse nor an opportunity to rebuild. They simply left Tulsa, never to return. As of 2018, no reparations have been paid, and the Oklahoma Supreme Court has ruled that the Statute of Limitations for cases based on the riot has long since expired.

The Rest of White Tulsa

The white mobs which had rioted and run amok in the neighborhood of Greenwood were not representative of all of white Tulsa, which reacted to the carnage and damage with shock and dismay. Despite the segregation laws in force within the city limits, many white homes were immediately opened to provide temporary housing to the homeless victims. None of Tulsa’s white neighborhoods had been touched by the riot, nor had any businesses been damaged, other than slight damage at the Armory caused by the attempted break-in on the evening of May 31.

Donations of food, clothing, money and other needed items were soon pouring into organizations established by local churches to provide what relief they could. Some were made directly to black families by the donors. Churches opened their doors for black congregations to use, separately from their own services, and tents were collected and distributed. The Red Cross provided food and shelter at the detention centers.

In the aftermath of the riots the Ku Klux Klan, recognizing in the Tulsa mobs a potentially lucrative recruiting ground, began to expand in Tulsa and in Oklahoma in general. Klan membership had been expanding since the end of the First World War, but Tulsa had not included an active chapter until after the riot. Recruiting in Tulsa began later that summer, and by the end of 1921, the Klan claimed 3,200 members in Tulsa alone, out of a white population of about 62,000. Klan activity continued to expand through the first half of the decade, concentrated in urban southern areas.

A group of about 250 whites formed a committee for public safety, determined to prevent a recurrence of the racial violence and to augment the city’s police force, which had been notably absent during the riot. The police absence was explained as being the result of deploying the limited number of officers available to protect other neighborhoods from being affected by the riot. The lack of damage in other areas was claimed as an indication that the police actions had been successful. Several eyewitnesses reported officers participating in the riot, although not in uniform.

After the release of the Grand Jury’s report, the story of the riots largely vanished from the local newspapers, and the reporters from the national press soon left for other stories. The riots were forgotten. In Tulsa, the topic of the riot was simply not discussed, despite the visible evidence of the violence just across the railroad tracks from downtown. Once the initial shock of the riot and the damage caused passed, it became a symbol of community shame for many, who chose to deal with it by simply making it go away.

Few history textbooks discuss the Tulsa riot of 1921. Almost immediately afterward there were efforts to figuratively sweep the event under the rug. The Tulsa Tribune, which published the inflammatory editorial suggesting the existence of a plan to lynch Dick Rowland is long defunct, and the paper copies of its edition for that day are non-existent. The microfilm copy is of a newspaper with the editorial page partially torn out. The actual words of the newspaper which incited some in the crowd are thus unavailable to historians.

Starting with the afternoon of June 1, when martial law was declared and a curfew established, efforts were made to keep the truth about the events of the two-day riot away from the public. That evening the only people allowed on the streets were police, firemen, National Guard troops, and emergency personnel such as doctors and nurses. Most of the city’s black population were in the detention areas or had, in very few cases, been allowed to return to their homes, or rather to where their homes had been.

But not all. The Salvation Army later reported that it fed 37 black men on Wednesday evening who were employed as grave diggers. Whom had employed them was not reported, but they claimed they had buried the bodies of 120 dead black men in unmarked graves. Other reports of unmarked graves appear in old funeral home records in Tulsa. This is in clear contrast with the official reports of casualties. The exact number of people killed in the riots is unclear, largely because there was no independent investigation of the event.

The performance of the Tulsa-based National Guard troops – as opposed to those which arrived from Oklahoma City and other parts of the state – is also something which its commander’s preferred to be kept under wraps. The Tulsa Guardsman actively took part in attacks rather than trying to suppress them and were responsible for the destruction of the Mount Zion Baptist Church by machine-gun fire and burning. By contrast, the troops which came to be known in Tulsa as State Troops disarmed anyone they encountered, black or white, as they restored order to the city.

Some accounts have stated that it was the State Troops from Oklahoma City who fired on the church with a machine gun before it was set ablaze. However, the church was already burning before the State Troops arrived and was destroyed before they deployed in the riot area in Greenwood. The State Troops and local Guardsmen wore the same khaki uniforms, which may have contributed to the misidentification.

Many of the detainees were allowed to remain at the fairgrounds’ location even after they had been released, having nowhere else to go. They were housed in tents provided by the Red Cross and after their release was required to pay for their food, also provided by the Red Cross. They could do so with money or through work and were paid standard wages for laborers of the day, from funds donated to the Red Cross and other sources. This led to complaints from within some of the white community that they were being coddled at taxpayers’ expense.

One of the jobs at which they could work was the removal of the ruins of Greenwood. Although Greenwood attempted to rebuild it faced legal challenges from the changed fire ordinances, the loss of several community leaders, and shortages of money. Most insurance companies refused to pay since the cause of the losses was a riot. The Mount Zion Baptist Church was rebuilt slowly. Many black residents of the former community left and never returned.

Officially 37 death certificates were issued for deaths which occurred because of the riot, although the death toll was possibly much higher. Efforts to locate evidence of mass graves such as those reported by the Red Cross being dug the day following the riot have been unsuccessful. The many different numbers of dead and injured reported are ascribed to a number of possibilities, including simply exaggeration. The truth is nobody really knows.

John Stradford, who owned the Stradford Hotel in Greenwood and was likely the area’s wealthiest resident and businessman, was one of the persons indicted for inciting the riot by the Grand Jury, having allegedly threatened to bring in support for the blacks of Greenwood from Muskogee by train. He left Tulsa and never returned, the hotel was destroyed in the riot. From Chicago, he successfully fought extradition back to Tulsa. In 1996 he was cleared of the charges.

Greenwood struggled on for a time, but during the Great Depression, it became a high crime area, with vice rampant. The bulk of the area was replaced with a highway in the 1970s. The Greenwood Historic District today comprises a small portion of what was once known as both Little Africa and the Black Wall Street.

“A Long-lost Manuscript Contains a Searing Eyewitness Account of the Tulsa Race Massacre of 1921”, Smithsonian.com

“Final Report”, Oklahoma Commission to Study the Race Riots of 1921

“‘Black Wall Street’ Before, During and After the Tulsa Race Massacre: PHOTOS”. MISSY SULLIVAN. History. MAY 24, 2021