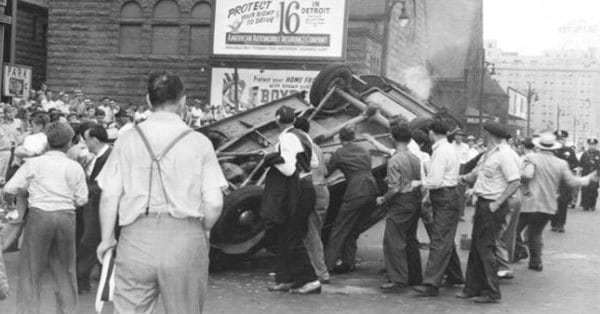 There have been quite a few significant race riots in the past 150 years or so. One of the most well-known is the Detroit race riot of 1943. 34 people were killed, 433 were injured and almost 2,000 were arrested during a two-day riot that spread through the city like a wildfire.

The cause of the riots in Detroit, which started on June 20, 1943, revolved around the influx of immigrants to the city. When the United States started to seriously enter the war effort during World War II, much of Detroit’s manufacturing power went towards making items needed for the military.

An estimated 400,000 immigrants flooded the city between 1941 and 1943. These people needed housing, jobs, and ways to transport themselves around the city. Detroit became much more crowded, and it was common for people to be pushed about. This happened very often with the African-American population.

The spark that tipped off the riot on June 20, was simply tensions exacerbated by the mingling of the migrant and native populations. It might not have gotten as bad as it did, if not for the fact that rumors surfaced in both the white and black communities about racially motivated crimes against their specific communities.

The result of the riot was utterly predictable. 6,000 federal troops were called in, and quickly put the rioters in their place. The victims of the riot were disproportionately African-American, however. Most of the 34 people killed were African-American, most of them killed by white policemen or National Guardsmen. Of the 433 wounded, almost 45 percent of them were African-American. And in terms of property damage, the vast majority of the estimated $2 million dollars in damage ($27 million in 2015 dollars) happened in black neighborhoods.

The investigation after the riot differed between who was investigating. The commissions that were formed to investigate the cause of the riots were all white, which, unsurprisingly led to a conclusion that the riots had been caused by “black hoodlums and youths.”

On the other side of things, the NAACP identified several more ingrained causes, namely shortage of affordable and appropriate housing, discrimination in employment and hiring practices, and no representation of minorities in the police force.

Racial tensions were nothing new. In fact, tensions had been high since long before the American Civil War, and only got worse once the war was over. For the next 75 years, a lot of the United States would see intermittent violence based around race.

The summer of 1943 alone saw major riots in Beaumont, Texas, where shipyard workers attacked the black community after the rumors of a white woman being raped; there was also a huge riot in Harlem, New York where African-Americans attacked property owned by whites after the rumors of the murder of a black solider had been circulated; and other cities like Los Angeles, California, and Mobile, Alabama also saw major violence between ethnicities.

Between 1941 and 1954, the US economy was changing very quickly. First it had to do with the war effort, then the economy became more driven by the newly formed middle class. These economic changes were not distributed equally. Inner cities, which were (and are) predominantly populated by minorities, were left behind, while the mostly white middle class prospered economically. This created even more tensions between whites and blacks.