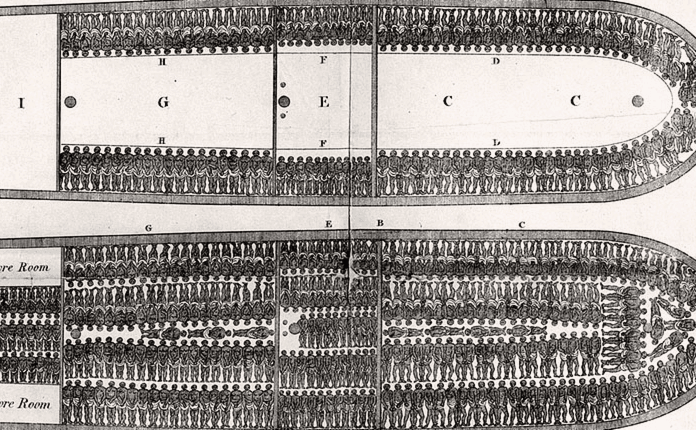 It was known as the ‘Middle Passage’ of the slave journey and it was truly brutal and dehumanizing. After being ‘collected’ from holdings along the West Africa coast, slaves would be loaded onto boats and then carried across the Atlantic Ocean. Once on the other side of the world, thousands of miles from their homelands and their loved ones, they would be put to work, most of them to be kept enslaved for the rest of their lives.

The hundreds of thousands of slaves forced against their will to make the journey had no idea what to expect. Many of them had been captured in the middle of the African continent and had never even seen the ocean before. Certainly, few had seen a white man or a huge cargo ship before. None had any idea of the fate which awaited them – nor could they imagine how hellish the journey to a faraway land would be.

In the vast majority of cases, the slaves themselves were unable to tell their own stories. Even if they could read and write, they didn’t have the opportunity to make a record of their experiences. Most of the men who crewed the slave ships were illiterate too, meaning we don’t have their accounts of what life was like on board the cruel vessels. But a handful of slaves did live to tell their stories, plus captains of slave ships and then, in later years, abolitionists campaigning against the inhumanity, also made historical records. Thanks to them, we know what life was like on slave ships – and it’s every bit as bad as you could imagine…

Setting sail on the ships from hell

In all, it’s estimated that as many as 6 million Africans were transported against their will across the Atlantic between the 16th and 19th centuries. The vast majority of them, around 42% were sent to the Caribbean, while 38% were sent to Brazil and around 5% to North America. This was a huge journey. While the passage from Angola to Brazil could be done in as little as 35 days, sailing from the west coast of Africa to North America required traveling more than 4,000 miles over the rough Atlantic. In the 16th and 17th centuries, this journey was mainly done by Portuguese ships, with the one-way passage taking three or sometimes four months depending on the weather conditions.

By the turn of the 18th century, the slave trade had grown to become a major business. This meant that bigger ships were being used and these were much faster than the vessels that had previously been used. For the captains, time was money. Being at sea for more days than was necessary meant that it was more likely some of his human cargo would die, cutting his profits. So, for this reason, every effort was made to get across the Atlantic as quickly as possible.

Slave ships were, on the main, large cargo ships that were specifically converted for the inhumane trade. Compartments were ripped out and the hulls were divided up into large compartments, each big enough to hold up to 100 slaves. These vessels became known among sailors as ‘Guineamen’, thanks to the fact they picked up slaves on the Guinea coastline in West Africa. It was onto these ships that slaves were loaded, all of them in chains and none of them knowing where they were destined (many even feared that they were being taken away to be eaten by white men, the former slave Olaudah Equiano wrote). The Guineamen became notorious for their cruel crews and insanitary conditions – and for good reason for life on board these slaves ships really was a living hell…