Tragedy and Honor: 10 Details You Didn't Know About the Life of a Kamikaze Pilot

Tragedy and Honor: 10 Details You Didn’t Know About the Life of a Kamikaze Pilot 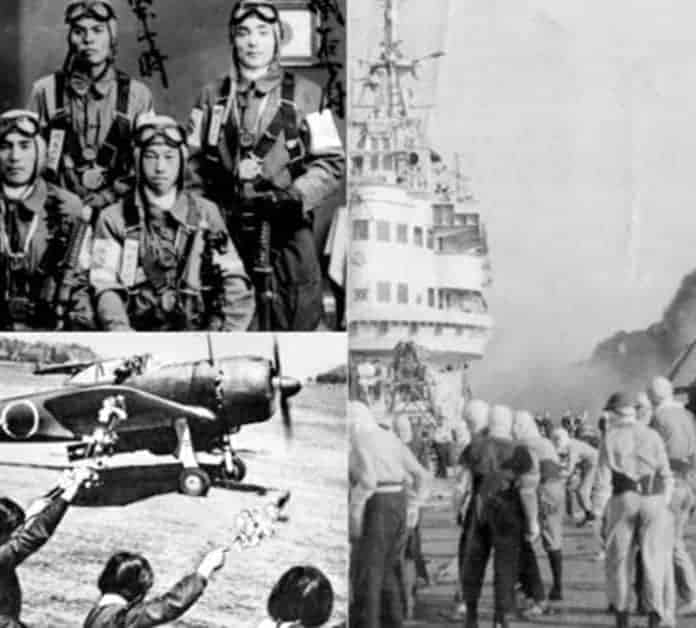 On October 25, 1944, during the Battle of the Leyte Gulf, the Japanese deployed the first weapon of its kind, forever changing the dynamic of Japanese military operations. Japanese suicide bombers, known as kamikaze- or “Divine Wind”- hurtled toward American warships in a desperate effort to swing the war into their favor.

The decision to use these unconventional methods was based on the failure of normal naval and aerial tactics to stop the American offensive from advancing. Thus, the kamikaze pilots were created as a part of the Japanese Special Attacks Units of military aviators. The first group consisted of 24 volunteer pilots from Japan’s 201st Navy Air Group. The mission was to attack U.S. escort carriers- the targets went down quickly. The first target, St. Lo, was struck by an A6M Zero Fighter and sunk in less than an hour; 100 American deaths. The new efforts were considered a success and encouraged the Japanese military to continue these sacrificial methods.

Kamikaze aircraft were basically pilot- guided explosive missiles. Pilots would attempt to crash their aircraft into enemy ships in what was called a “body attack”. These attacks were performed in planes full of some combination of explosives, fuel tanks, torpedoes and bombs. The accuracy proved to be an improvement on conventional attack, boasting a 19 percent success rate. In addition to improved accuracy, a kamikaze could sustain more damage than a conventional attacker and still achieve its objective.

Captain Motoharu Okamura, a Japanese naval commander stated: “I firmly believe that the only way to swing the war in our favor is to resort to crash-dive attacks with our planes… There will be more than enough volunteers for this chance to save our country.” More than 5,000 kamikaze pilots died in the gulf battle, which successfully took down 34 targeted ships. By the end, more than 1,321 Japanese aircraft crash-dived their planes into Allied warships during the war; killing approximately 3,000 American and British troops.

While these unconventional sacrifices for victory may seem very odd to some, the threat of defeat pushed the Empire of Japan to believe the sacrifice of pilots and aircrafts were justified. So what was it like living as a kamikaze pilot, nose-diving to death? The military tactics dehumanize the loss of human life, so sometimes we may not get a clear picture of the type of men who volunteered their lives to the cause of victory. In this article, you will find surprising information about the daily life of the kamikaze pilot- their sacrifice treasured by the country they served.

Japanese Soldiers were taught to Commit Suicide to Avoid being Captured

When a Japanese soldier entered the military for training, one of the first things they were taught was to kill themselves with their rifles. How does this make for a good soldier? Some believe this inspiration could go back to the idea of Seppuku, which is a form of Japanese ritual suicide – traditionally of disembowelment, usually reserved for a samurai. This suicide was meant for the samurai to die with honor rather than fall into the hands of an enemy. While the idea and honor in death of Seppuku is reserved strictly for a traditional samurai, it shows that the idea of suicide is preferable to some cultures rather than being captured and risking dishonoring your country.

In the final years, when the kamikaze pilot groups were created, the cadets clearly understood that Japan was fighting a losing war. Therefore, rationalizing their own deaths, they believed sacrificing their lives for the sake of their country’s survival would not be a total waste. Some even convinced themselves fighting to the death could even save the Japanese people by forcing the Allied Forces to make concessions to spare any more loss of life on their end.

This idea of nationalism made people believe the Japanese were sacrificing their lives for the nation-state of Japan. While they wanted to do whatever they could for the Emperor, many first hand accounts of this patriotism showed that they were fighting for their small, beautiful hometowns- not the overall country. This revelation digs deeper into the psyche of a kamikaze pilot and the reasons they would go to such extreme lengths to win the war.

The new soldiers would train by learning how to pull the trigger with their toes while aiming the barrel at a distinct point under their chin so that the bullet would cause instant death. If a soldier decided to decline this option, his fellow soldiers were instructed to shoot him from behind. They believed there could be no chance of capture – death could be the only alternative.