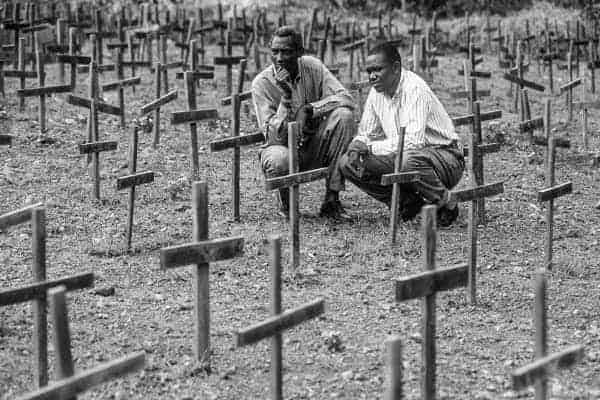 There have been an innumerable number of human tragedies throughout the centuries. Untold numbers of people have died at the hands of other humans over politics, religion, power, and other reasons. One of those tragedies started on this day in 1994.

Starting on April 7, 1994, the Hutu, the ethnic majority of Rwanda, killed more than 800,000 people, in one of the largest genocides since before World War II. The Tutsi, the minority in Rwanda at the time, were the main victims of the slaughter.

Rwanda gained independence in 1962, and ethnic tensions were high over the next few decades, with violence between the Hutu and the Tutsi occurring regularly. Several coups were attempted, the most successful one taking place in 1993. This attempt by the Tutsi resulted in the Hutu-led government signing an agreement that would allow the Rwandese Patriotic Front (RPF), a Tutsi led rebel group, a spot in a transitional government.

Hutu extremists were up in arms about this agreement, which is one of the factors that led to the Rwandan genocide.

On April 6, a plane carrying the Hutu Rwandan leader was shot down. To this day no one knows who actually did it, but the Hutu extremists took it as a sign that the Tutsis were responsible. Within an hour of the crash, the Presidential Guard, as well as several Hutu extremist groups, began slaughtering Tutsis without any remorse. Men, women, and children were killed for no reason.

On April 9, the moderate Hutu government that had been in place had been killed off, and a more extreme militant Hutu government took its place. The new leaders of the country used media to encourage the average Hutu to take up arms and to remove the “Tutsi stain from their country”.

By July 1994, the RPF, the Tutsi-led group, had won a heated civil war that was fought alongside the genocide. The RPF gained control over most of Rwanda, leading to more than 2 million Hutus leaving the country.

The RPF established a coalition government consisting of both Tutsi and Hutu leaders, and ratified a new constitution that was based less on matters of ethnicity than the previous government charter. Elections and democracy soon followed.

The question a lot of people ask is, what was the international response to this genocide? The answer is, for the most part, the international community sat on the sidelines during the tragedy. The UN bailed on what peacekeepers they had there, once again bringing their efficiency into question. It wasn’t until late May 1994 that the UN finally brought in soldiers, and by that time, much of the damage had already been done.

In the end, the Rwandan Genocide of 1994 will go down as one of the worst tragedies in the history of mankind.

VOX – Rwanda’s genocide — what happened, why it happened, and how it still matters

ThoughtCo – Why Is There Conflict Between Hutus and Tutsis?

History Collection – The Armenian Genocide: The 8 Steps That Led to the Annihilation of a People