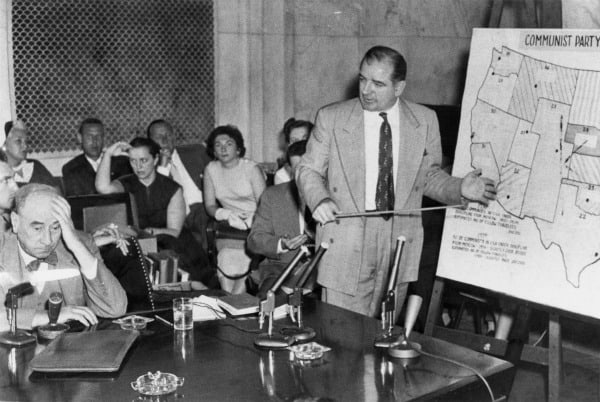 Hollywood’s Witch Hunt Created a Communist Blacklist for these Celebrities

20. The Hollywood Blacklist began to collapse after Spartacus and Exodus appeared

With the release of Spartacus, Exodus, and the revelation both were written by the blacklisted Dalton Trumbo, the Hollywood blacklist began to collapse. Trumbo admitted he had written Roman Holiday and The Brave One, both of which had been awarded Academy Awards for Best Story. Both credited the story to fictitious writers at the time. Trumbo returned to screenwriting using his own name and was reinstated to the Writer’s Guild of America, to the outrage of Hedda Hopper. Others returned to the good graces of filmmakers and producers. Edward G. Robinson, who had wallowed in low-budget productions while on the gray list, returned to stardom, including with The Cincinnati Kid in 1965.

Many of the actors, writers, directors, and film production experts blacklisted during the period were in fact communists, some proudly so. Not all claimed to have been used or duped. Lionel Stander, whose career stalled for many years after being blacklisted, served as an example of such. Stander (and others) argued that membership in the Communist Party or holding communist political ideals did not break American law. His position was that the techniques of the HUAC and the actions of the studio heads in Hollywood did. “My estimation of this committee is that this committee arrogates judicial and punitive powers which it does not possess”, he told the HUAC. He remained on the blacklist for nearly 25 years, before returning to a major role on television, in the series Hart to Hart.

21. Some of Hollywood’s most famous performers and creative artists appeared on the blacklist

Besides those already noted, many noted names of screen and literature were blacklisted, with a detrimental effect on their reputations and careers. Dashiell Hammett, the creator of Sam Spade and the Thin Man, appeared on the blacklist. So did writer Lillian Hellmann. Eddie Albert, who gained widespread fame as Oliver Douglas in the rural sitcom Green Acres did so after recovering from years on the blacklist. Blacklisted, Charles Chaplin was refused a visa to return to the United States after a trip to Europe and spent the rest of his life in exile in Switzerland. The noted animator Bill Melendez, a former Disney employee and later responsible for bringing Peanuts to television, spent years on the blacklist.

The Hollywood Blacklist both denied people the right to work in their chosen profession, and drove the careers of many who exploited it. Hedda Hopper used the fear of the blacklist to blackmail studio executives and crush celebrities of whom she disapproved. Politicians labeled those suspected of communist leanings as agents of the Soviets, reporting directly to Moscow. Investigations by the FBI, the NSA, HUAC, and other agencies both in federal and state governments never produced any evidence of such a relationship. American singer and actor Paul Robeson appeared before the HUAC in 1956, and subsequently was blacklisted for many years. During his testimony, Robeson told the committee, “You are the non-patriots, you are the un-Americans, and you ought to be ashamed of yourselves”. The House of Representatives finally disbanded the HUAC in 1975.

“Statement of the Committee for the First Amendment”. National Archives. October 21, 1947. Online

“‘We Ask You Not to Condone This’: How the Blacklist Saved Hollywood”. Jon Lewis, Cinema Journal. Winter, 2000

“No Sense of Decency: The Army – McCarthy Hearings”. Robert Shogan. 2009