The True Story of The Last Duel and Judicial Combat 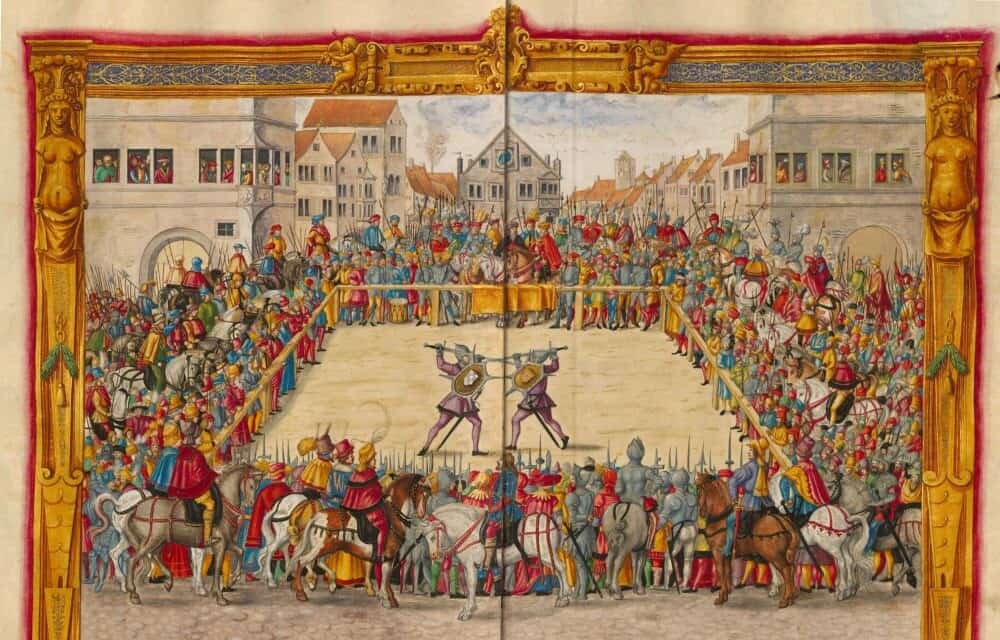 The True Story of The Last Duel and Judicial Combat

18. The practice of fighting duels evolved from trial by combat

Fighting a duel to resolve private differences was widely practiced among the nobility concurrent with the sanctioned trials by combat. Laws against the practice of duels existed while trial by combat was still widely asserted to be a right among the nobility. In the early years of the 13th-century dueling was officially outlawed by the Church, via the 4th Council of Lateran. Trial by combat was officially authorized by a court. Duels were arranged by the individuals involved, who negotiated the conditions of combat and the weapons to be used through representatives called seconds. Between the issuing of a challenge and the conduct of the duel itself, neither involved party could officially recognize the other. They were controlled through the Code Duello, which first appeared in Renaissance Italy. France had a similar code, which was formally published.

Duels were not necessarily fought to the death, though those arrangements could be made by the seconds. The emergence of firearms made the practice of dueling yet more dangerous since the practice of medicine lagged far behind the development of weapons. Even the slightest wound could fester, and eventually kill. By the late 18th century the practice of dueling was frowned upon by the authorities in most European countries, though in the more independently minded American colonies, and later states, the practice continued well into the 19th century. One of the most famous duels in history, that between Alexander Hamilton and Aaron Burr, took place in New Jersey, though both men resided in New York. The site was selected because New Jersey did not aggressively enforce its laws against dueling, while New York did. New Jersey did indict the victorious Burr, though the charges were dropped.

In 2020, a Kansas man requested a court in Iowa sanction trial by combat to resolve a child custody dispute. He called for his ex-wife to engage in combat, to be fought with Samurai swords, though he suggested that his former spouse’s lawyer could stand-in for her, in the role of a champion. He made clear in his petition to the court that he intended to kill whomever of the two appeared against him in battle. In March 2020, in response to the man’s request, the court ordered him to undergo a psychological evaluation to determine whether or not he was sane. After the evaluation gave the petitioner a clean bill of mental health the court found him sane, and the petitioner demanded his ex-wife and her attorney undergo similar evaluations.

Other legal disputes have led to similar motions in courts in the United States, which has never outlawed trial by combat specifically, at least not at the federal level. All states outlawed dueling, most of them before the Civil War. Dueling fell out of favor among the general public, though it lasted longer in the Old South than in the rest of the country, and by 1860 was all but gone. In 1983 a Delaware court rejected an appeal for trial by combat submitted by a defendant, citing the illegality of dueling in the state. Such requests are not limited to the United States. In 2002 a British court denied a request for trial by combat. The request was made over a dispute between the plaintiff and the Driver and Vehicle License Agency. Great Britain officially abolished trial by combat (called wager of battle in Britain) in 1819, through an Act of Parliament.

20. The emergence of the jury system brought an end to trial by combat

By the beginning of the 14th century, the legal profession and the practice of trial by jury gradually brought about an end to the practice of trial by combat, though several occurred into the 16th century. The opposition of the Church to the practice rendered it unpopular with courts and magistrates. Nonetheless, many nobles and minor nobles, such as Jean de Carrouges, demanded it as their birthright. The last known legally sanctioned judicial combat in France took place in in the mid-16th century. In Britain, the last likely occurred in 1597. Other proposed wagers of battle in Britain were circumvented by the intervention of the monarch, including Elizabeth I and Charles I during their reigns. Certainly, the most well-remembered of all trials by combat remains the affair of Jean de Carrouges and his slaying of Jacque Le Gris.

In the centuries since, some scholars have argued that Le Gris was unjustly maligned by Carrouges, whose motives seemed to be the removal of a rival from court, rather than outrage over his wife’s rape. Others have stated Marguerite put her own life at risk by refusing to recant her charge against Jacques Le Gris. Had her husband lost the battle, she faced burning at the stake. Thus, three lives were at stake when Le Gris and Carrouges took the field. Had Le Gris confessed to the crime of rape once combat had begun, he would have been executed, though not for rape, a property crime. He would have been executed for giving a false oath before God. Following his death, the absurdity of relying on the Almighty to render judgment on those accused of a crime through trial by combat gradually led to its fading into history.

“Under law, rape was at first a crime only against a father’s property”. Susan Brownmiller, The New York Times. October 1, 1975

“The True Story Behind ‘The Last Duel’ – and History’s Attempt to Erase It”. John-Paul Heil, TIME Magazine. October 15, 2021

“Who is Marguerite de Carrouges?” Olivia Olphin, The Focus. 2021. Online

“The True Story Behind ‘The Last Duel’ Is Still Being Debated”. Arya Roshanian, Bustle. October 15, 2021