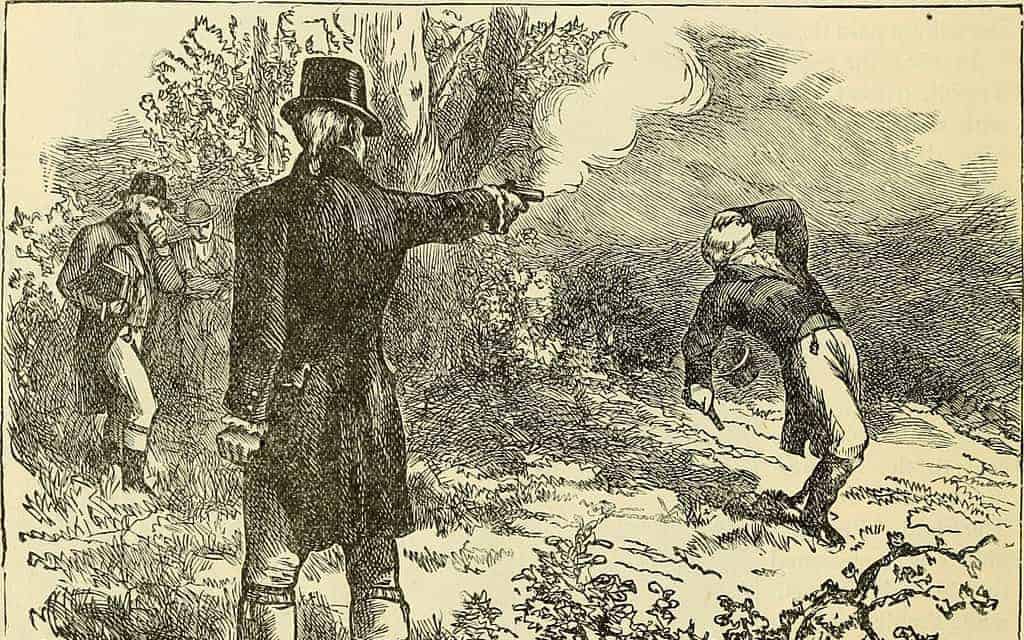 Long before Alexander Hamilton was the subject of a smash-hit musical, he was a man with a dream. Though he was born on a British-controlled island in the Caribbean, Hamilton was an American patriot. And like many young patriots, he dreamed of making his adopted home in the 13 colonies strong and independent. Hamilton followed that dream through the Revolutionary War and into a place in the heights of political power. There, he fought to help establish a strong central government that would unite the new country and make it wealthy. But like many men with a dream, Hamilton also had a powerful enemy.

Hamilton’s enemy was a man named Aaron Burr. Aaron Burr was a lawyer, military officer, and Vice President of the United States. And depending on who you ask, he was also possibly a traitor and a murder. Like Hamilton, Burr served in the Revolutionary War and later became an important politician in the years after independence. But while Hamilton was a Federalist, meaning that he wanted the federal government to have more control over the States, Anti-Federalists like Burr believed that a strong federal government was a threat to liberty. Naturally, this made the two political opponents.

Another vote was held, and if Burr could get one more vote than Jefferson, he would be president. Hamilton disliked both candidates. But he decided that while he might not like Jefferson, he was far better than Burr. So, he used all the political influence he had to push for Jefferson, who eventually won the vote. And when the election of 1804 rolled around and Burr ran again, a New York paper published a letter to Hamilton’s father in law saying that Hamilton thought Burr was a dangerous man “who ought not be trusted with the reins of government.”

Even worse, it mentioned that there was “a still more despicable opinion which General Hamilton has expressed of Mr. Burr” at a political dinner. Burr read the letter and, naturally, wanted to know what this despicable opinion was. So, he sent in his own letter demanding Hamilton explain himself. Hamilton replied that Burr was making too much of the issue and that he had never said anything especially “despicable” about Burr. Or at least, if he had, he couldn’t remember it. But this wasn’t enough of an explanation for Burr. And he eventually challenged Hamilton to settle the argument with pistols.

While the idea of two politicians- one of whom was the sitting vice president- settling their argument with a duel seems insane now, it was actually pretty common at the time. The duel was a way for people who were prickly about their honor to show that they were willing to defend it to the death. But while duels still went on in the 1800’s (both Hamilton and Burr were actually involved in several of them before 1804), they were seen by many people as old-fashioned.And of course, duels weren’t really even supposed to be to the death.

Usually, the duelers would show up and then try to work out the disagreement. If they couldn’t make up, the first man would usually fire his gun into the ground. This showed that while they were willing to die to defend their honor, they didn’t really want to kill the other person. And usually, this meant that the other person would shoot his gun into the ground as well. That way no one looked like a coward, no one died, and both people got to defend their honor.

By 1804, dueling was illegal in New York. Deuling was also illegal in New Jersey. But the authorities didn’t punish it as often, which is why Burr and Hamilton decided to hold the duel there. And in the early hours of July 11, 1804, the two men met at a popular dueling spot to settle their dispute one way or the other. And by the end of the day, Alexander Hamilton was dying. But that’s about the last thing we know about the event with any certainty. What we don’t know is whether or not Burr had meant to kill him.

Both men brought friends called “seconds” to the duel. These men were traditionally supposed to help the men dueling by making sure that no one broke the rules of the duel. But Burr and Hamilton’s seconds couldn’t agree on what exactly happened. All of the seconds had their backs to the dueling men so they could claim in court that they hadn’t actually seen the duel, but that also meant no one was really sure what happened. We know that Hamilton’s shot didn’t hit Burr. But we don’t know if that’s because Hamilton was signaling he didn’t want to kill Burr, or if he just missed. But Burr’s shot struck home, lodging inside Hamilton’s torso.

One of Hamilton’s seconds claimed that Burr dropped his gun and rushed towards Hamilton, which he thought meant that Burr hadn’t actually meant to kill him. But it’s also very possible that Burr did. And according to the agreement behind the duel, he was justified in killing Hamilton. Whatever Burr meant to do, Hamilton died the next day. And the nation now had to deal with the news. The seconds gave different accounts to the press about who fired first. And that was just the beginning of the many mysteries surrounding the duel that have confused historians ever since, including whether or not Hamilton may have actually wanted to die.

Before the duel, Hamilton wrote in a letter that he hated the concept of dueling. Hamilton’s son, Phillip, had even been killed in a duel a few years before. In fact, it actually happened in the same place where Hamilton himself would be killed. Hamilton wrote in the letter that he would not fire at Burr. But on the morning of the duel, Hamilton didn’t fire into the ground. Instead, he fired over Burr’s head. It’s easy to see how that might make Burr think Hamilton had simply missed. Some historians have even suggested that Hamilton was trying to provoke Burr into killing him. This would ruin Burr’s political career and make Hamilton a martyr.

Hamilton wasn’t opposing Burr’s political goals just because he didn’t like him. He saw Burr as a potential tyrant who would destroy the republican government of the country. In a sense, Hamilton may have been trying to sacrifice his own life to save the country. It would make Hamilton a hero who would be remembered forever and ruin Burr. Of course, that’s only one possible interpretation of the events. It’s possible that Hamilton simply made a bad decision in firing towards Burr instead of into the ground. But in either case, Burr was certainly ruined.

Burr was charged with murder multiple times, but none of the charges resulted in a trial. Burr was still forced to resign as Vice President in 1805. Showing some of the political skills that made Hamilton worry Burr would be an American Caesar, his farewell speech moved even his harshest opponents to tears. With his political career over, Burr began looking at some of his other options. And the one he may have decided on was absolutely insane. The Burr Conspiracy, depending on whom you ask, was a plan to either to either destroy America with the help of European powers, detach large parts of the country that Burr could rule like an emperor, or possibly just a complete hoax.

The plan supposedly began the same year of the duel when Burr met with a representative of the British Government. Burr suggested that he could help the British detach large parts of the Louisiana purchase if they were willing to give him cash and a few ships to support his plan. But when the British didn’t seem particularly interested, Burr turned to the Spanish. In 1806, he contacted a Spanish Minister and told him that he was planning to lead parts of the US to secede from the country and then attack Washington D.C.

The minister gave Burr a few thousand dollars to get started, but the Spanish government didn’t give Burr any official support. Burr then went around gathering troops for his expedition. But one of Burr’s accomplices quickly betrayed him to President Jefferson, and Burr was arrested for treason. Because of a lack of hard evidence, Burr was let go. Historians have debated ever since whether Burr’s plot was ever serious or even real- obviously, the evidence wasn’t conclusive. But either way, he was completely ruined. Burr spent a few years traveling around Europe, forgotten and penniless. He eventually returned to the US under a fake name, where he died in 1836, bringing an end to one of the strangest chapters in American history.

American Heritage Magazine: The Conspiracy and Trial of Aaron Burr