The Reality of Debtor's Prisons in Britain and North America

The Reality of Debtor’s Prisons in Britain and North America 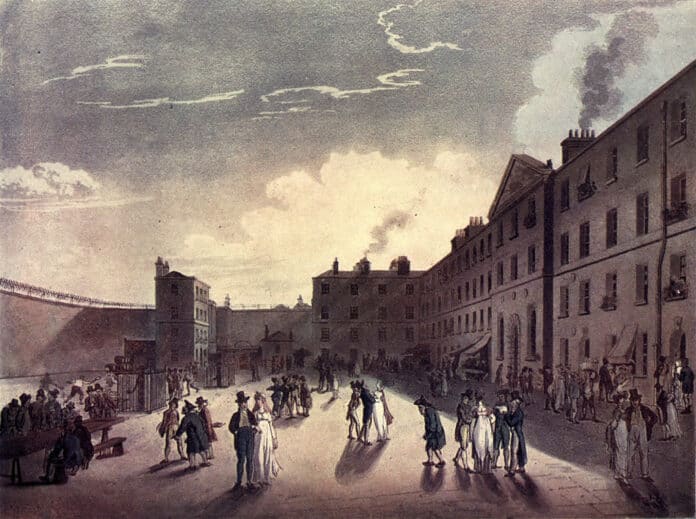 The European nations which sent settlers to the New World in the 17th and 18th centuries already had a long tradition of imprisoning people for unpaid debts, both public and private. In Great Britain, whole families sometimes found themselves forced to live in prisons, in often squalid conditions. They remained there at the whim of the person or persons to whom they were indebted, further burdened with the necessity of paying the prison for their upkeep. In 18th century Britain, an average of 10,000 persons entered debtor’s prison each year, forced to remain until their creditor approved their release, usually upon receipt of payment, or through other arrangements.

One such arrangement consisted of entry into indentured servitude, often to a person departing Britain for the colonies in North America. In short order, debtor’s prisons developed in the colonies, and they remained in business when the colonies became the United States. Two signers of the Declaration of Independence subsequently spent time in prison for indebtedness. One, James Wilson, became one of the first Associate Justices of the Supreme Court. While serving in that office he twice spent terms in debtor’s prisons, having been financially ruined during an economic downturn in 1796. Another lost his fortune financing the American Revolution, and spent time in debtor’s prison while the President of the United States resided in his house. Here is the bizarre history of debtor’s prisons in Europe and America, and some of the more famous people who served time in them.

1. Debtor’s prisons varied in conditions and rules across Britain

From the early 12th century, debtor’s prisons peppered the landscape of the growing metropolis of London. Unregulated by the government and operated for profit, each prison had its own rules and practices, established by its warden. Inmates paid for their food, for their upkeep, and for services such as having their shackles removed. The inmate’s ability to pay affected the conditions he suffered while imprisoned. Those with enough money to ingratiate themselves with the warden lived in private rooms, had food and drink delivered from outside the walls, and often enjoyed their freedom during business hours. Some even lived outside the walls of the prison, in rooms nearby.

Those less fortunate ate what they were fed, slept on straw mattresses, and incurred further debt. Some prisons, including London’s notorious Fleet Prison, allowed inmates to beg through iron-barred windows, importuning passers-by for charity. In most cases time in prison did nothing to relieve the obligations of the debtors; release was not based on a set period of time, but on the ability of the debtor to obtain a release from the creditor. Even after it was received, some prisoners remained incarcerated until they discharged their obligations to the warden incurred during their period in his custody. Some wardens exhibited greater compassion for humanity than others, but for nearly all a term in debtor’s prison represented the depths of despair.