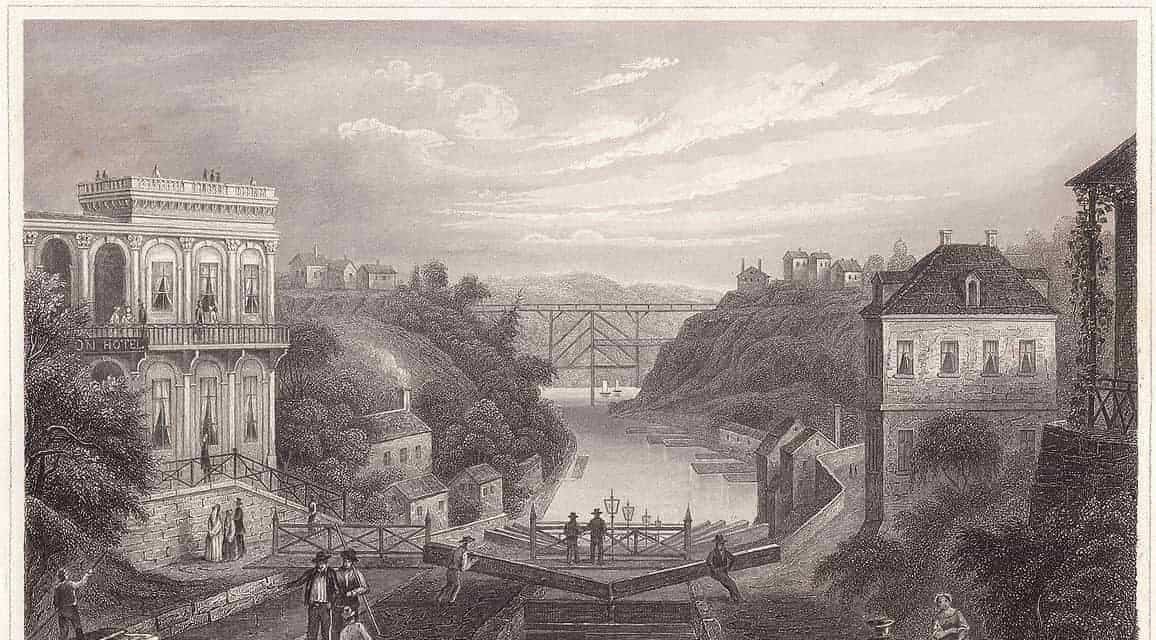 The New York Legislature became convinced that a canal across New York could boost trade and commerce. The transport system was very poor it took two weeks to reach New York from Buffalo. DeWitt Clinton argued for the building of a canal. The canal was to be from Buffalo on Lake Erie to Albany on the Hudson River and would pass through a gap in the mountains. The legislature granted the spending of the then fabulous sum of 7 million dollars for the construction of the canal.

The canal was planned to be some 363 miles long, 40 feet wide, and four feet deep. The new canal became known popularly as ‘Clinton’s ditch’ after Governor Clinton and work began on it in 1823. Oxen yoked to ploughs was used to plough up the ground and then laborers followed to dig up the ground. Many of the laborers were Irish emigrants who were paid the princely sum of ten dollars every four weeks. The laborers had to rely on basic tools such as spades and picks. To encourage the Irish workers’, the company overseeing the work had barrels of whiskey placed all the route of the canal. Some 84 locks were built in order to accommodate the 450 feet rise in the elevation west of Troy in New York State. Despite the basic tools and the fact that there were almost no machines involved in the project, it took only two years. It was a great feat of engineering.

The day that the canal opened a unique communication system was developed to alert the citizens of New York. Cannons were fired at regular intervals along the canal. The canals took an hour and a half to convey the message to New York, that the canal was opened.

The final act of the opening ceremony was when Clinton De Witt brought a barrel of water from Lake Erie and poured it into New York harbor. This was to symbolize the ‘marriage’ of the water of the Lake and the Ocean.

The canal revolutionized the transportation system of the New York State area and beyond. Goods could be transported for one-tenth of the cost and this led to an increase in trade. Barges were used to transport food and other goods from a wide area of the North West to New York. While goods and products from New York were sent out west. The canal was financed by tolls and these were able to pay off the costs of the construction of the canal in less than ten years.

The canal was also to play an important part in the development of previously underpopulated areas such as Ohio. The canal was to remain very busy for many decades and was even able to remain popular during the railways’ booms of the mid-nineteenth century.

Library of Congress – The Erie Canal

University of Virginia – The Erie Canal and De Witt Clinton

Bill of Right Institute – The Building of the Erie Canal

ThoughtCo – The Building of the Erie Canal