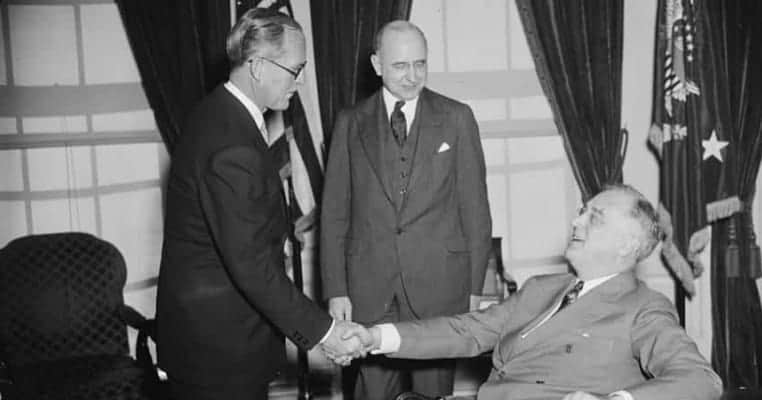 24. Kennedy’s political career ended with his resignation in 1940

Ambassador to the Court of St. James was the last political position held by Joseph Kennedy Sr. He did not completely fade from the political scene, in 1941 he testified during congressional hearings over lend-lease. Kennedy made clear that he favored aid to the British, but not at the expense of weakening America’s own defenses. He also argued against expanding the power of the presidency. When Roosevelt announced his intention of running for a fourth term Joe Kennedy Jr. refused to support the nomination.

In 1944 Kennedy and virtually everyone who knew Roosevelt could see that the president was but a shell of the man who had entered office in 1933, weak, infirm, and painfully thin. To nearly all, but kept from the American public, it was clear that the chances of Roosevelt surviving a fourth term were slim. Truman was shocked when he met with the president at his unhealthy appearance. Kennedy offered his services to the war effort in a variety of posts and though Roosevelt remained friendly on a personal level, there was no effort to solicit further service from the former ambassador. His money though was welcomed in numerous Democratic campaigns.

Joseph Kennedy, like all members of the extended family of which he was the patriarch, is a highly controversial and polarizing figure today. He is often condemned as a criminal, a womanizer, an irresponsible father who had his daughter lobotomized and then institutionalized, and many other things. Some are true, some are exaggerated, and some are the smears of those who simply hate the name Kennedy. A search for truth that penetrates the veil of hatred and the myths it created reveals a far more complex portrait of the man. He was certainly no saint, but neither was he Satan in Irish disguise.

His personal papers remain in the care of the John F. Kennedy Presidential Library, where few have had unfettered access to them (biographer Doris Kearns Goodwin is one) and where they are likely to remain for the foreseeable future. The American Library of Congress contains much of his correspondence from his various government posts, as does the FDR Presidential Library, the State Department Archives, and the National Archives. The true story of the man is available for those willing to dispel preconceived notions and myths. It is far more interesting than the idea of Kennedy simply having been the man known as Bootlegger Joe.

“The Fitzgeralds and the Kennedys: An American Saga”. Doris Kearns Goodwin. 1987

“The Patriarch: The Remarkable Life and Turbulent Times of Joseph P. Kennedy”. 2012

“The Shipbuilding Program of the US Maritime Commission”. Article, MARAD. Online

“The Secret of the Churchill-Roosevelt Correspondence: September 1939 – May 1940”. James Leutze, Journal of Contemporary History. July, 1975. Online