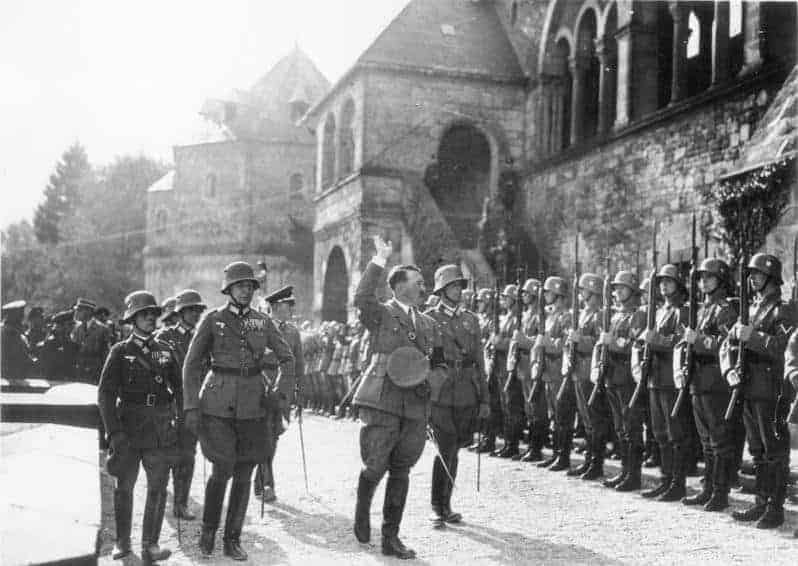 On this day in history in 1925, the first Volume of Adolf Hitler’s autobiography, Mein Kampf, is published Germany. The book is a curious mixture of reflection and autobiography and it is generally considered to be far from being a literary work. The work is filled with Hitler’s views on contemporary Germany and the World. In particular, it sets out how Hitler thought that Germany had been betrayed during WW I. The book also contained Hitler’s ideas on how he would make Germany a great power once more. In this book, the core ideas of the Nazi Party are evident and they are set out. In fact, not many of Hitler’s ideas did change when he was in power. Mein Kampf is still a work that offers insight into the evil ideology of Nazism and its racist ideology.

The work, calls for a Third Reich, in Germany and a clear exposition of the horror that would envelop Europe from 1933 to 1945. The book sold almost 10,000 copies in its first year. It was later to be re-published many times.

Hitler began writing his work while sitting in prison, convicted of treason for his role in the infamous Beer Hall Putsch. During this Putsch Hitler and his small group of followers tried to seize power in Munich. The uprising was a bloody joke. The police stayed loyal and opened fire on Hitler and his fellow rebels and some 23 of them were killed. The government in Bavaria later arrested Hitler and he was sentenced to a period in jail. The courts in Germany all had right-wing sympathies and they hated communism. Hitler was fortunate to receive a lenient sentence and only served nine months in prison. It was here that he dictated his work. During his time in prison not only could he write a book but he received many guests and had a very comfortable cell. Rudolf Hess acted as his secretary and he transcribed what Hitler dictated.

The first part of Mein Kampf, subtitled “A Reckoning,” He later called for an absolute ruler in Germany such as Frederick the Great.

“There must be no majority decisions, but only responsible personsâ€¦ Surely every man will have advisersâ€¦ but the decision will be made by one man.”

The second part of the book contains a prediction of war and also offered a blueprint for the future National Socialist State. One of the most sinister aspects of the book was its antisemitism. Hitler makes clear that he blamed many of Germany and the World’s ills on an imaginary conspiracy.

It was not until 1933, the first year of Hitler’s tenure as chancellor of Germany, that sales soared to over 1 million. Its popularity reached the point where it became common to give it as a gift to newly married couple a copy. It is believed that sales of the book helped to make Hitler quite a wealthy man.