Birds, Entrails and Newborn Babies: 20 of the Strangest Fortune Telling Methods from History

Birds, Entrails and Newborn Babies: 20 of the Strangest Fortune Telling Methods from History 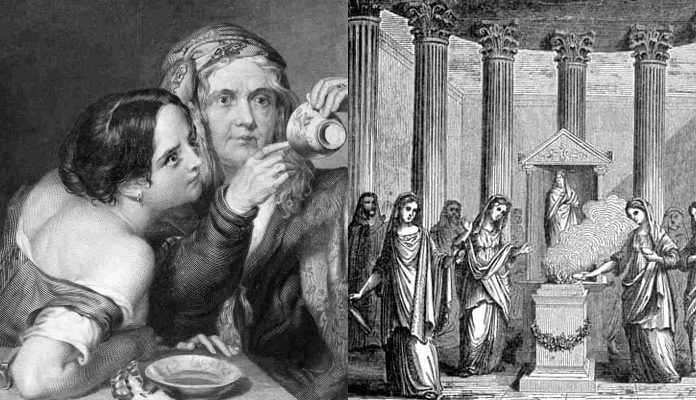 These days, most forms of divination – that is, ways to try and see into the future – have been roundly and comprehensively dismissed by science. But that doesn’t mean that fortune-telling isn’t still immensely popular the world over. Despite all the arguments against various beliefs and superstitions, many people want to try find ways to see what the future holds in store for them – just like their ancestors have over the millennia.

The ways people have tried to predict the future or tell the fortunes of themselves or others over the years have varied greatly. Some ancient cultures looked to the natural world for signs, while others believed man-made concepts such as numbers of language held the key. And interestingly, there was a lot of crossover; in some cases, the same fortune-telling methods were practiced by peoples separated by thousands of miles or even hundreds of years.

Of course, some methods are understandable. For instance, the pagan or Native American belief that the weather or nature can be used to see what’s around the corner has some basis in scientific fact. But sometimes the fortune-telling methods of the past were just downright bizarre. So, here we have 20 ways in which people have tried to gain an insight into the future over the course of history:

20. In Ancient Rome it was believed that the direction in which birds flew reflected the feelings of the Gods, and the practice of augury even gave the city its name

In Ancient Rome, it was believed that the flight of birds could be used to predict the future. Of course, not just any birds were chosen by the Gods to make their wishes known. According to the sources of the time, the practice of augury was a complicated business. So, while at the most basic level, birds such as crows, vultures or eagles flying to the left was seen as a good sign, and flying to the right seen as proof of the Gods’ disfavor (interestingly, the opposite was the case in Ancient Greece), there were countless extra rules, which is why such fortune-telling ceremonies were presided over by specialist priests, or augers.

The practice of augury can be traced back to the Etruscans, back in the 6th century BC. It was adopted by their successors, the Romans and, most famously, the Eternal City allegedly got its name from birds. According to Plutarch, Romulus and Remus both wanted to have their new city named after themselves. To settle the matter, they climbed to the top of the Palatine Hill and engaged in some competitive augury. At the end of the day, Romulus had spotted more vultures than his twin brother. The city they founded was duly named in his honor.