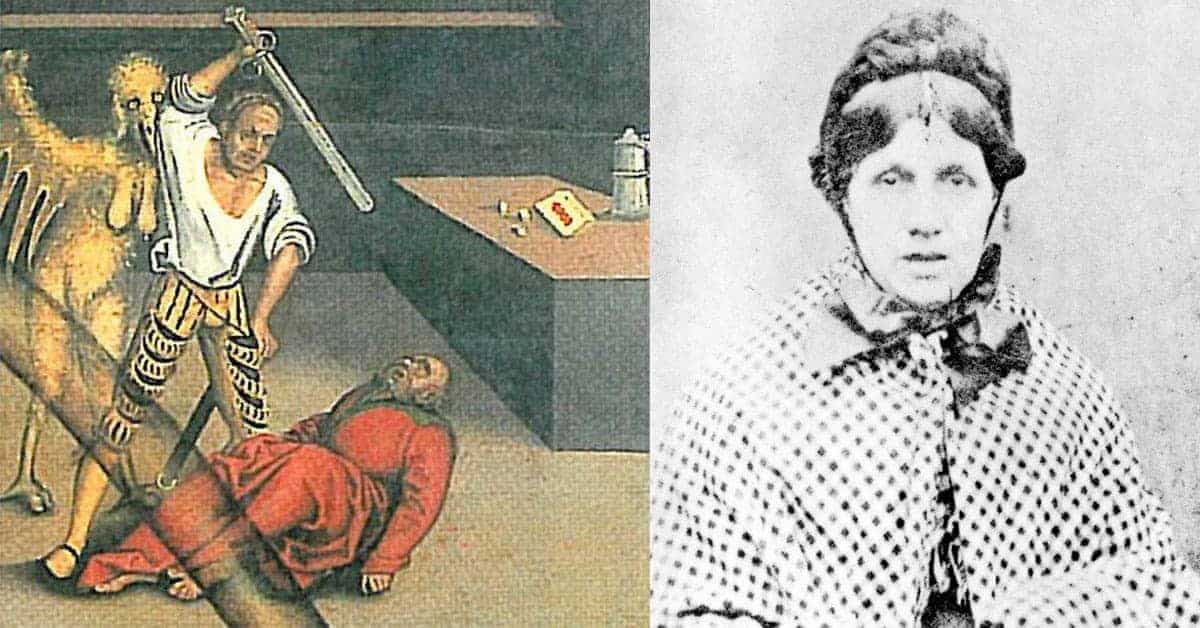 Mary Ann Cotton was an Englishwoman who was convicted for the murder of her stepson. After her hanging, investigators and researchers concluded she murdered up to 21 people, including three of her four husbands, eleven of her thirteen children, two boyfriends, and servants who had become suspicious of their mistress. Mary Ann preferred the use of arsenic poisoning as her murder weapon.

Contrary to what many believe, arsenic does not kill rapidly, but causes long and agonizing gastric pain and distress as it does its work. Medical opinion of the day was insufficient to diagnose its use unless there were reasons to suspect it, and various “fevers” were blamed as the cause of death in such cases. Mary Ann killed for money, in the form of life insurance, or for self-preservation by eliminating the suspicious.

Mary Ann was caught after learning that a former lover had returned to live nearby. Desirous of joining him, she used arsenic to murder Frederick Cotton, her fourth husband and third to die of poisonous ministrations. After his death, she applied the same attention to her late husband’s son, Charles, who died after a short illness. Mary visited an insurance office to file a claim prior to arranging for the boy’s funeral, prompting notice of her numerous visits to the insurance company in the past. Soon the sheer number of people around her who had died from “stomach ailments” convinced the authorities and the general public of her crimes; a post-mortem of the late Charles confirmed arsenic in his hair samples, and Mary Ann was tried for his murder.

Mary Ann was found guilty and sentenced to hang, going to the gallows strongly asserting her innocence, despite the overwhelming nature of the evidence against her.

Jane Toppan – real name Honora Kelley – was abandoned to an orphanage by a father well-known in his Boston neighborhood as being off his rocker (a local rumor had him sewing his own eyelids shut, explaining why he was known as “Kelly the Crack” – short for crackpot). Honora was a difficult child in the orphanage, and later as an indentured servant in the home of Ann Toppan in Lowell, Massachusetts. Honora Kelley became Jane Toppan, although never adopted by Mrs. Toppan, and it was under that name that she entered Cambridge Hospital to study nursing.

As a nurse, Jane became fascinated with drugs such as morphine and atropine, and used her access to them to alter the dosages prescribed by doctors for her patients. As a resident Jane experimented with her usually elderly patients, bringing them to the brink of death before reviving them, only to then dispatch them with another altered dose. During this time of drug-induced mortal peril, she would lie in the bed with the patient, obtaining what she later described as sexual gratification.

Jane next worked at Massachusetts General Hospital, claiming additional victims before dismissal for using dangerous drugs recklessly. It was as a private nurse, her next occupation when her killing began in earnest. Her landlords were her first victims, followed by her sister, then the elderly patient she was hired to care for after his wife died (she had killed the wife earlier). She followed that murder by killing the couple’s two daughters. Jane preferred to use strychnine as her poison of choice, easily available in the rodent-infested Victorian Age, but difficult to trace.

When Jane was caught she confessed to 31 murders, all by drugs or poisons, and stated that had she ever married and had a family she would never have resorted to killing. Found not guilty by reason of insanity, Jane spent the rest of her natural life at the Taunton Hospital for the Insane.

Henri Landru first discovered the joys of crime as a fraud specialist, concentrating on elderly widows as the targets of petty swindles, for which he served time in prison on several occasions. In 1914, while working as a dealer of used furniture, Henri began running advertisements in Paris newspapers, seeking lonely hearts among the growing number of war widows in the French capital.

By the end of the First World War four years later Landru had met, seduced, swindled, and murdered ten victims found through his ads. Landru was careful to use different aliases and background stories with each widow and to frequent different areas of Paris as we wooed each victim.

In 1919 the sister of one of Landru’s victims began pursuing him, eventually gaining the support of the at first doubtful police. Although no bodies were ever found, fragmentary records of Landru’s activities slowly emerged. Eventually, he was charged with the murder of eleven victims, for which he was tried, convicted and guillotined in 1922.

His head is on display at the Museum of Death in Hollywood, in which he is identified as the “Bluebeard of Paris.” In 1947 Landru was the inspiration for the character Monsieur Verdoux in the movie of the same name, portrayed by Charles Chaplin.

Jake Bird was an itinerant laborer who favored working for the railroads as a section-gang laborer when he wasn’t serving time in prison. By the time he was 45 years old Bird, by his own estimates, had served at least fifteen of those years in prison for petty theft, burglary, assaults, and attempted murders. Working for the railroad kept him on the road, away from the watchful eyes of local police, and allowed him to pursue his penchant for murder.

When Bird burglarized a home in Tacoma, Washington in 1947 he used an ax to kill two women in the home, and then resisted arrest by assaulting a police officer while armed with a knife. Bird was convicted of murder and sentenced to death by hanging. While awaiting execution of sentence in early 1948, Bird started confessing to other murders, in multiple states, which he had committed when he had been in the area for railroad work. Eventually, Bird confessed to 44 murders, hinting that there were more, and waited while the various affected states filed for stays of execution in order to clear homicides on their books by bringing Bird to trial within their jurisdictions.

How many of the 44 murders Bird actually committed is unknown; he had sufficient knowledge of the crimes to allow investigators to close the books on previously unsolved crimes. Eleven of the murder claims were fully substantiated and would have led to charges if the prosecutors had not chosen to defer so as to not delay execution. While working for and traveling on the railroad Bird had claimed victims in eleven states, from Washington to Florida, mostly women.

Bird was hanged on July 15, 1949, for the double murder in Washington, but not before a “curse” he had placed on participants in his trial, in which he told those involved with his prosecution that they would die before he did, gained partial credence. Five members of the court involved in his trial preceded Bird in death, just as he predicted.

Sean Vincent Gillis committed his ritualistic murders after stalking and kidnapping his victims, whom he raped before killing and afterward mutilated their bodies. But he remains almost unknown. Gillis committed his crimes in Baton Rouge during the same time frame another serial killer was active in the area, Derrick Todd Lee. When Lee was arrested the killings in the areas did not stop, leading authorities to realize there was a second serial killer at work. Because Lee was arrested first, Gillis became known as “The Other Baton Rouge Killer.”

Gillis blamed his early murders on “stress” and later described himself as “pure evil.” His first victim, a woman in her eighties, was stabbed more than fifty times. He stalked his second as she jogged for three weeks before running her down with his car, wrapping her in plastic, raping and murdering her, and then disposing of her body in a ditch. A later victim was severely mutilated, including the gouging out of a tattoo which Gillis found offensive, removed while she was still alive. He began to take pictures of his victim’s bodies after mutilating them, and collected body parts to keep as souvenirs. All of Gillis’s known victims were women, ranging in age from 29 to 81, killed over a period of ten years.

Gillis was eventually tracked down using tire and other forensic evidence collected at a crime scene and after DNA evidence tied him to three murders he was convicted and given life in prison. Following this conviction, Gillis confessed to five additional murders and provided evidence which supported his conviction, including photographs.

Gillis has written that he doesn’t know why he committed any of the murders, and claimed to be shocked at the level of violence shown, including the dismemberment of bodies.

Vegabomb – 10 Women Who Killed for Money, Power, Love and More

The Sun – For 10 Years, ‘Jolly Jane’ Poured Her Poison

All That Interesting – The Story Of Henri Landru, France’s Charming Bluebeard Serial Killer

South Sound Talk – Jake Bird: The Strange Story of a Tacoma Serial Killer and the Hex that Made Him Famous