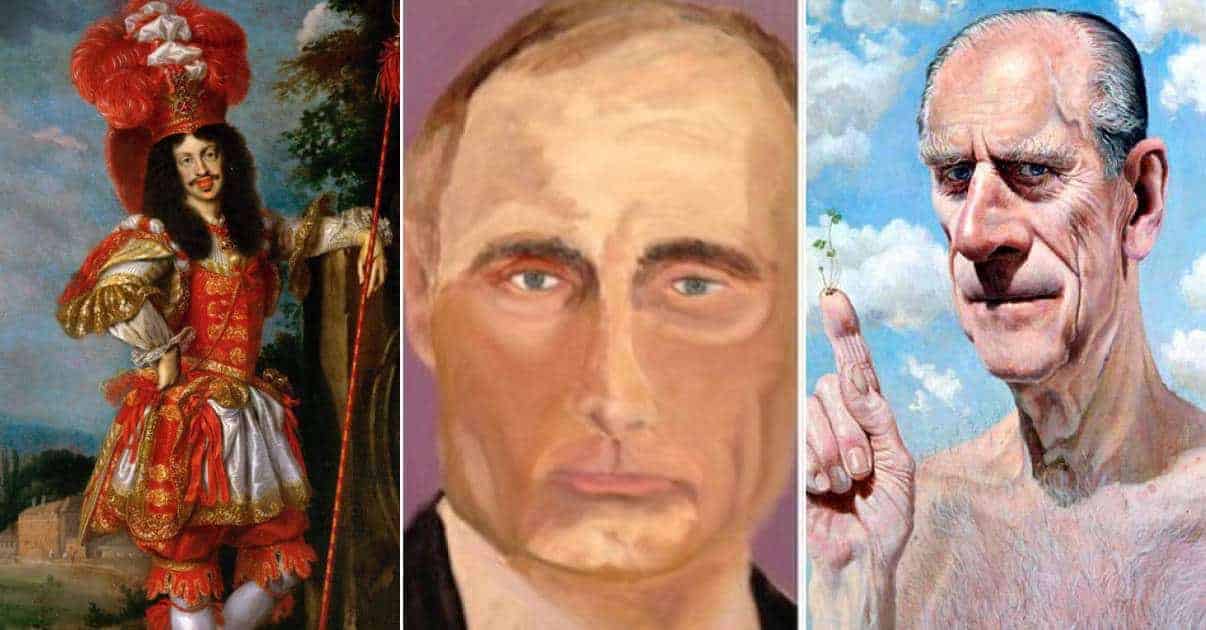 In 2004 Stuart Pearson Wright was given the green light by Prince Philip, the Duke of Edinburgh, to do his royal portrait. The Duke declined an invitation to model at the artist’s studio, an old sausage factory in east London. Instead he insisted that Stuart came to Buckingham palace for four one-hour sessions (sixteen short of the recommended 20 sessions).

The title of the resulting work is Homo sapiens, Lepidium sativum and Calliphora vomitoria, which is essentially a pretentious Latin translation of “a wise man, some cress, and a bluebottle”. It does exactly what it says on the tin. The bluebottle might seem completely random, and to a large extent it is. But it does derive from the Vanitas tradition in art, which interpolates a worm-eaten apple or falling rose or something similar to tie us to nature and remind us that all flesh is grass.

The cress, according to the artist, is a reference to the Prince as seed-bearer to the royal family (good luck trying to get that image out of your head). And then there’s the chest hair. No, it’s not Philip’s torso. It belongs to an anonymous, elderly gentleman who lives in London’s Bethnal Green. Apparently he was rather startled that his chest had ended up superimposed on the Duke of Edinburgh, but also quite flattered.

The portrait didn’t go down terribly well with the Duke. At the end of the first hour’s sitting, Philip peeked over the artist’s shoulder and in horror exclaimed, “Godzooks!” which, after looking up, I can tell you is an archaic English term for God’s hooks, and means to say he didn’t like it. After the fourth and final sitting, Pearson Wright asked the Duke whether he thought he’d captured a resemblance. “I bloody well hope not,” was his concise response.

Unsurprisingly the portrait doesn’t hang in Buckingham Palace or Balmoral. Deemed “inappropriate by the Royal Society of Arts, it was kept by the artist who put it on sale for £25,000. A head and shoulders version greets startled visitors to the RSA’s Strand Headquarters. The Duke of Edinburgh has apparently yet to visit.

Suffice to say it came as a surprise when, in 2013, the first portrait of the Danish Royal Family in 125 years was unveiled. Not least because is resembled a scene from “The Omen”. Critics, as they are wont to do, criticised the work, calling it a mix between a horror film advertisement and a botched Photoshop attempt. Disappointing news for the artist, Thomas Kluge, who spent four years painting Queen Margrethe and her family.

The portrait evoked an earlier piece; the last portrait of the Danish Royal Family, set in the hall of Fredensborg Palace in the mid nineteenth century. But despite the stylistic similarities between the two—not least their realism/hyper-realism—the artist never intended for it. “I was trying to take out realistic depictions because we live in a democratic world and I think our Queen and her family are now symbolic,” Kluge explained. “This is satire.”

Well at least we can all agree there’s little realistic about the setting. The family float in purgatorial darkness before a crumbling, century-old backdrop of the former palace. It’s the stuff of nightmares, particularly with Princess Isabella (far left) clutching a doll and doing her best demon face and Prince Christian, the second in line to the throne, looking like the protagonist from Honey I Shrunk the Antichrist. At least the sittings were more fun-filled with the artist playing football with Prince Christian between sessions.

Still, at least the Danish Royal Family isn’t as picky as the British. Queen Margrethe at least accepted the work (though without publically commenting as to whether she liked it or not). And Margrethe knows a thing or two about art. As well as being a full-time monarch, she’s a part time painter: the illustrator for the Danish edition of JRR Tolkein’s “Lord of the Rings” series and a painter in her own right, with a recent exhibition in Denmark’s Museum of National Art. Then again, being the Queen it can’t be that hard to get a spot…