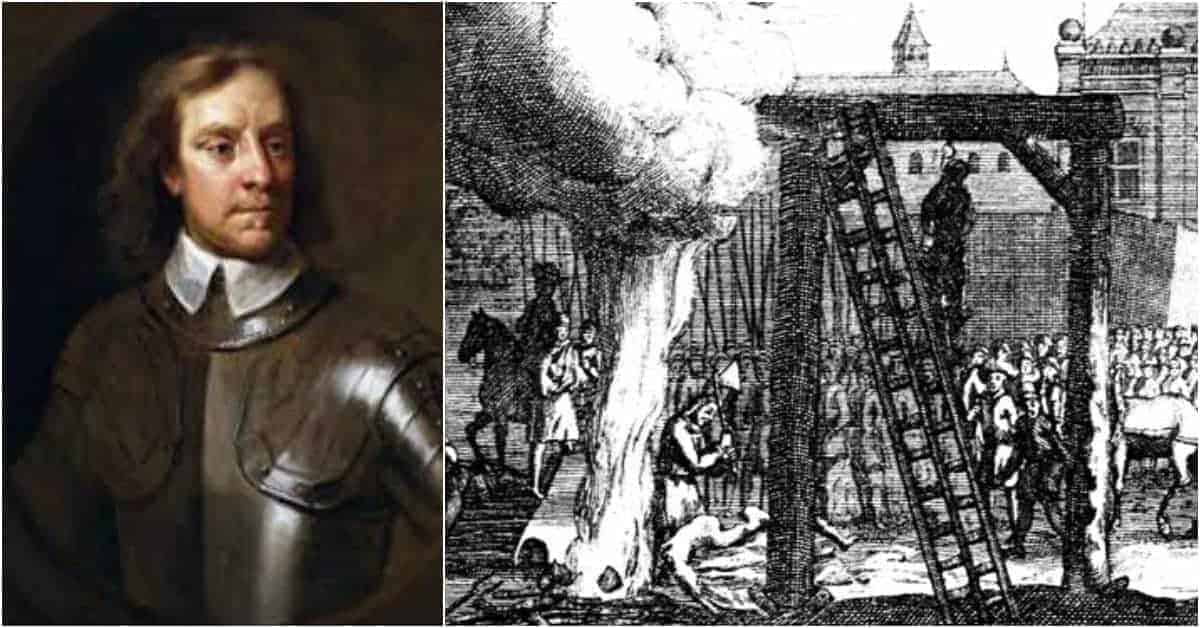 On September 3, 1658, Oliver Cromwell drew his last breath, bringing an end to his reign as “Lord Protector of the Commonwealth of England, Scotland, and Ireland.” It was a position that afforded him near-dictatorial power over a country that had just been through a bloody period of civil war.

Cromwell’s reign was controversial, to say the least. To some, he was a hero, but to others, he was a bloody-handed tyrant. Needless to say, Cromwell’s career in government left him with a lot of enemies. And these enemies weren’t going to let something like Cromwell’s death keep them from getting their revenge.

That’s why, years after his death, Oliver Cromwell’s body was pulled out of his grave to stand trial. Along with two other corpses and a dozen living men, Cromwell was charged with regicide for his role in the beheading of the previous English King. Being understandably mute in his defense, Cromwell was found guilty and sentenced to the traditional punishment for traitors to the Crown.

His body was hanged and cut into quarters. Meanwhile, his head was separated from the body and mounted on a spike, beginning a long, strange journey that would span centuries.

Of course to understand why Cromwell’s head ended up where it did, one must understand the story of the English Civil War. The origins of the Civil War really lie in the conflict between the Parliament and the reigning monarch, Charles I. At the time, Parliament lacked many of the powers that it has today. Instead, it served at the whim of Charles I, who could call and dissolve the body more or less at will. But Parliament did have one important power: the authority to raise new taxes. That power meant that the king relied on it to fund his wars.

So, while Charles might have wanted to rule more or less absolutely, the power of Parliament over the purse strings meant that he often found himself having to call the body into assembly when he needed money. Many of the members of Parliament, including Oliver Cromwell, wanted concessions of power from the King in exchange for raising new taxes. This was the basic dynamic at play for much of Charles’ reign. He would dissolve the Parliament in order to rule absolutely, angering the more democratic members of Parliament, only to call the body back into session when he ran low on cash.

But there was also another important source of tension in English society: religion. Many of the members of Parliament, again including Cromwell, were Puritans. Puritans were members of the Church of England who objected to any element of religious ritual that they considered to be “too Catholic.” This often put them at odds with Charles I, whom they considered to have Catholic sympathies. Several of Charles’ religious reforms were seen as attempts to reintroduce the Catholic Church to England and ignited protests among many of the Puritans in the English Gentry. And these conflicts between the Crown and Parliament would soon lead to war.

In 1642, the King attempted to arrest several members of Parliament on a charge of treason. But rather than hand the men over, many members of Parliament took up arms. Sensing that his support in London was weak, the King fled to the north and communities around the country began to choose sides. By the end of the year, the English Civil War was raging. Under Thomas Fairfax and his second-in-command Oliver Cromwell, the Parliamentary forces eventually gained the upper hand. By 1646, the Royalist forces were exhausted and King Charles fell into Parliamentary custody.

The issue of what to do with the King led to a debate between those who wanted to reinstate the monarch with checks on his power and those who wished to try him for treason. The second camp eventually won out and in 1649, the king was found guilty and beheaded. This course of action was opposed by Fairfax, who resigned as head of the army and was replaced by Cromwell. Now, in charge of the army and with the King dead, Cromwell found himself in charge of the English Government. But royalist sympathy remained strong in much of the country and the violence continued.

From 1659 to 1651, Cromwell led his army to stamp out resistance against his authority in Scotland and Ireland. These campaigns were extremely bloody. Through a combination of warfare, starvation, and disease, historians have estimated that up to six percent of the Scottish population died and an astonishing forty-one percent of the Irish population perished. This figures, along with the undeniable brutality that Cromwell’s forces practiced left a deep sense of hatred among much of the population in Ireland and Scotland towards Cromwell. Even today, Cromwell is a much-reviled figure in the Irish imagination, who see him as a genocidal maniac.

Cromwell’s rule was also widely unpopular in England, where he established something like a military dictatorship under the title of “Lord Protector.” A deeply religious man, Cromwell pushed for social reforms that would spread Christian morality across the nation. Theaters were shuttered, sports were banned, and anyone who swore in public was subject to fines. Colorful clothing was also banned and anyone caught doing unnecessary work on a Sunday could be fined or even put into stocks. Even Christmas celebrations were banned as being too festive, and Cromwell pushed to re-establish the holiday as a solemn religious ritual.

These reforms left many in England pining for the return of the Monarchy, now represented by Charles I’s son, Charles II, who had escaped to France during the war. After Cromwell’s death, power passed to his son Richard, who struggled through a short period of ineffective rule before resigning. Shortly afterward, Charles II was recalled to England and restored to power. Charles pardoned everyone except those who had played a direct role in the execution of his father, which is how Cromwell’s skull came to be separated from his body and placed on a pike. But it wouldn’t stay there forever.

Cromwell’s skull rested on its pike above Westminster Hall until the late 1680s, when a fierce storm snapped the pole and sent the skull tumbling to the ground. There a passing guard picked it up and tucked it away inside the chimney of his house. The Government, eager to see the head returned to its pike, offered a large reward for its safe return. But in spite of a massive search effort, the head remained hidden for the next few decades. In 1710, the skull turned up again in the possession of a French collector, who displayed it in his London museum.

By this time, much of the post-war animosity toward Cromwell had subsided and the head became more of a curiosity than a political symbol. And following the death of its previous owner, the head was sold to Samuel Russell, a failed actor who claimed to be a distant relative of Cromwell. Russell seems to have been fairly careless with the artifact, and frequently passed it around to his drinking buddies, leading to significant damage to the skull. He finally lost possession of it when a local goldsmith named James Cox demanded the head as payment for a debt Russell owed him.

Cox sold the head in 1799 to three brothers named Hughes, who was interested in staging their own exhibition of the head and charging for admission. In case you’re wondering what the head of the former Lord Protector was worth in today’s money, the skull sold for about seven thousand pounds. Unfortunately for the Hughes brothers, the planned exhibition was a flop and the skull ended up in the possession of one of their daughters, who continued showing the skull to anyone who asked to see it. Finally, in 1815, the skull was sold to the Wilkinson family.

The Wilkinson family kept the skull in their home and were happy to show it as a curiosity to any prominent guests who came to visit. The skull remained in their possession for over a century, stored inside a simple oak box and passed down through the generations. Finally, in 1960, Horace Wilkinson decided that his rather grim family heirloom deserved a proper burial and contacted Sidney Sussex College, which agreed to bury the head on the campus. And in 1962, a few of the living Wilkinsons gathered with representatives of the college for a small ceremony where the head was finally laid to rest.

There was always dispute over whether or not the head was actually that of Oliver Cromwell. Over the years, different teams of researchers have reached different conclusions on its authenticity. In fact, few people’s remains have been the subject of as many legends as Cromwell’s. There are even stories that suggest that Cromwell’s body was swapped out with that of Charles I before his execution. Most evidence suggests that the skull buried by the Wilkinson family was probably Cromwell’s. But the stories surrounding his remains are a reminder of how strongly the events of history can be felt even centuries later.