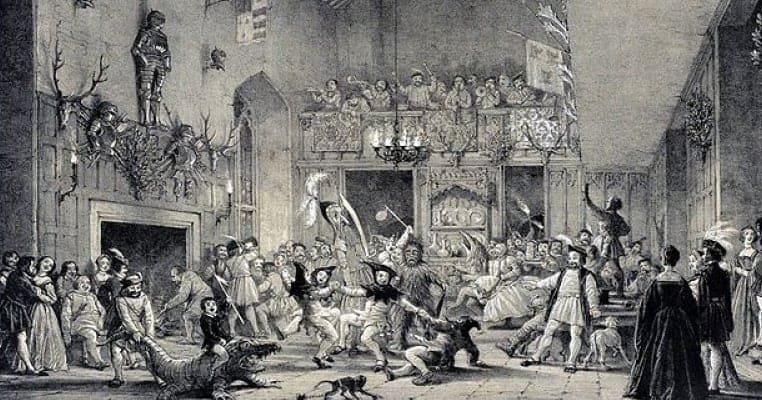 By the early seventeenth century, Christmas was one of the most important feasts in the English Calendar. It was a joyous occasion, when, for a twelve-day period, men and women marked the birth of Christ with religious observances – and ancient pastimes, Churches held services to celebrate the birth of Christ decked in the same holly and ivy as private homes. Once the religious rituals were over, people distributed Christmas boxes, to tradespeople, servants and the poor. Then they relaxed into the seasonal revels: playing sports and games, dancing, and eating and drinking seasonal favorites such as mince pies, plum pottage, and Christmas Ale.

Then, in 1642 the English Civil War broke out, and Christmas, as well as the King, found itself under attack from the Puritan parliamentarians. In staunch Parliamentary areas, Christmas day services ceased, and Christmas became like any other day, as shops remained open and business as usual occurred. In 1651, the Civil Wars were over and the monarchy defeated. However, the war against Christmas continued as the Lord Protector Oliver Cromwell continued Parliament’s offensive on the midwinter festival. Cromwell’s task was no easy one, for the fight to abolish Christmas met with no small resistance. So why did Cromwell and the Puritans hate Christmas so much? And how did those people who wished to celebrate it defy the law?

The Puritan View of Christmas

The Puritans never approved of Christmas. They saw it as a frivolous festival without Biblical precedent. No one knew when Christ was born and nowhere in the Bible did it say to celebrate the Savior’s birth with riotous festivities. Christmas, therefore, was sinful and immoral- and superfluous to the Christian calendar. Consequently, the Puritan campaign against Christmas was almost as old as puritanism itself. Shortly after the establishment of the English Reformation, in the mid-1500s, the Puritan Pamphleteer Philip Stubbs published The Anatmie of Abuses in which he complained that at Christmas “more mischief is…committed than in all the year besides.”

Aside from being frivolous and entirely unnecessary for the salvation of true Christian souls, Christmas from the Puritan point of view was a source of ‘mischief’ for a variety of reasons. At best, it was a festivity with Catholic overtures, preserving as it did the “trappings of popery.” These ‘trappings’ were a reference in part to the central role of the Holy family in Christmas celebrations and in particular to the Virgin Mary who Catholics viewed as semi-divine but who the Puritans viewed as a complete irrelevance.

Strangely, the advent of Protestantism seems to have increased the importance of Christmas for the Catholic Church. During the Middle Ages, Easter had been the more important festival. However, with the rise of the reforming faiths, Catholics began to cleave to Christmas. Perhaps this was because it contained so many elements that their faith held precious, such as the Virgin Mary, candles and other symbols of ‘idolatry.’ Writers recorded that after the Reformation, the surviving Catholic priesthood determinedly kept the old traditions of Christmas as best they could even when they were imprisoned or in hiding. It was almost as if celebrating Christmas had become a gesture of defiance to the increasingly staid reformists.

At worst, however, Christmas to the Puritans was a barely concealed pagan celebration. Its mumming, holly and ivy and blatant feasting nothing more than ‘rags of the beast,” barely hidden in a Christian context. Many puritan scholars noted that the celebrations of Christmas had more in common with the Roman festival of Saturnalia and numerous other pre-Christian midwinter festivals than the birth of Christ.

Joseph Hemmings, a Staffordshire Presbyterian minister, writing in 1648, recognized that the early church had deliberately established the celebration of Christ’s birth at midwinter to help reconcile new believers to the Christian faith- and to try and stamp out pagan worship. However, the plan to replace the rebirth of the sun with the birth of the Son of God had not worked out too well, from the Puritan viewpoint. For that reason alone, Christmas needed to be stamped out.

The Puritans Declare War on Christmas

The protestant dominated Scottish Kirk managed to abolish Christmas in the 1560’s- although King James VI brought it back in a toned down form in 1617. However, Puritans in England remained sadly thwarted in combating Christmas because their influence was restricted. Instead, many contended themselves by distancing themselves from the festival. Some removed any religious connotations from the festival, referring to it as Christ ‘tide’ instead of Christ ‘mass”. If they did mark Christmas day at all, it was a day of solemn fasting and reflection rather than feasting. However, most Puritans preferred to ignore Christmas altogether.

This all changed with the outbreak of the English Civil War. In exchange for Scottish assistance against King Charles I, English MPs had to agree to the reformation of the Church of England to meet exacting Presbyterian standards. The radical puritan elements in the English parliament needed no further excuse. Finally, they could declare war against Christmas as well as the King.

Initially, Puritans banned Christmas in all areas that declared for parliament. On Christmas day, shops were directed to remain open, and church services were forbidden. Meanwhile, parliament itself was busy in London issuing legislation independent of the King that would ban Christmas. In 1644, MPs passed an ordinance which confirmed the abolition of Easter, Whitsun, and Christmas as feasts of the Church of England. Christmas Day was a day like any other- and to prove the point, staunchly puritan MPs made sure they were at work on Christmas Day.

In January 1645, a new directory of Public Worship declared Sundays the only holy days, due to all other feast days “having no warrant in the word of God.” Now any minister found to be holding services at any other time- including Christmas- was to be imprisoned. Although Cromwell was not directly responsible for the instigation of the Puritan campaign against Christmas, when he became Lord Protector in 1653 he introduced stringent new measures of his own to bolster existing legislation.

Under Cromwell, legislation to prosecute those who attended Christmas services was extended to include members of the congregation- not just the ministers. As well as declaring shops and markets should remain open, the Lord Protector also ordered soldiers to patrol the streets and seize and food and drink that appeared to be destined for a Christmas celebration. The measures were a mixed success. For although most churches did indeed abandon Christmas day services, it was harder to prevent festivities in private homes. As a result was, Christmas went underground. However, the celebrations went on. For the ban on Christmas was not a popular one.

The Battle to Keep Christmas

Cromwell needed to reinforce existing legislation because the people of England refused to give up Christmas. Most people kept Christmas on the quiet. Resistance in some areas, however, was brazen. On Christmas Day 1643, a mob of London apprentices went about the city, forcing shops open for business to close. It was a scene that repeated itself in different towns around England at different times. In 1646, the apprentices of Bury St Edmunds followed suit. When the local constables tried to force the crowd to disperse, an angry scuffle broke out, and several people were injured.

Violent protests also occurred over Christmas decorations- and church services. In 1647 an angry mob physically prevented the mayor of London and his men from removing Christmas decorations that revelers had draped about a water conduit in Cornhill. When the constables began to arrest people, the protest disintegrated into violence, and one man died of his injuries in Newgate jail. That same Christmas, The Kingdom’s Weekly Post reported how some eager Christmas churchgoers went to Christmas day services armed to ensure their worship was not interrupted and that “the church doors were kept with swords and other weapons defensive and offensive whilst the minister was in the pulpit.”

By far the most alarming incident of Christmas 1647 occurred in Canterbury, an otherwise pro parliamentary city. A large crowd gathered on Christmas day, demanding services and the all-around keeping of Christmas. When an overexcited protestor assaulted a soldier, the protest turned into a full-on revolt. The Christmas crazy crowd then attacked the Mayor’s house, and before they knew it controlled Canterbury. They held the city for the entire Christmas period, decking doorways with holly and ensuring plenty of Christmas cheer. However, a new slogan arose from amongst the festive greenery: “for god, King Charles, and Kent.” It seemed that some places were so tired of Puritan piety they were even willing to have the supremacy of the monarch back.

By the late 1650s, it seems that the best efforts of Puritans to persuade people to lay aside the ” jollity and vanity of the time” were largely in vain. More and more people were risking arrest to attend unofficial Christmas services. Some shops still refused to open and “taverns and taphouses’ were routinely full on Christmas Day. In 1656 when a reverend Ezekiel Woodward admitted defeat in the face of a congregation who “go on holding fast to their heathenish customs and abominable idolatries and think they do well’.

Meanwhile, that same year in London, MP’s sourly noted that they had slept poorly on Christmas Eve due to ‘preparations for this foolish day’s solemnity.” Those attending parliament the following day noted that it was still common to “pass the Tower to Westminster” and find“not a shop open nor a creature stirring.” The Puritans had finally lost the battle over Christmas. The Pro Christmas victory, however, did not become decisive until 1660 when the monarchy as finally restored. Then, the Directory of Public Worship and all other legislation made from 1642 onwards was declared null and void. Finally, Christmas in all its secular and sacred glory could be celebrated in the open again.

Where Do We get This stuff? Here are our sources:

Christmas abolished! Why did Cromwell abolish Christmas? The Cromwell Association

Did Oliver Cromwell ban Christmas? The Puritan assault on Christmas during the 1640s and 1650s, Mark Stoyle, History Extra, December 2, 2020.