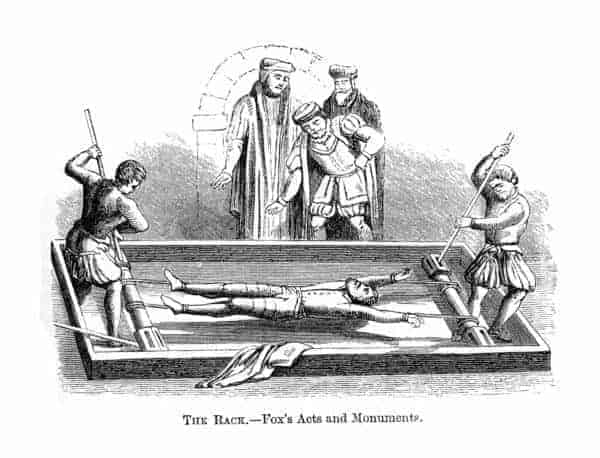 The Catherine Wheel, or the Breaking Wheel, was a form of capital punishment adapted from the Rack. For the Spanish Inquisition, torture methods had to provide variety and surprise. The more forms of torture the greater the chance that accused infidels would confess to their crimes and embrace the Church.

An adaptation of the Rack, the Wheel dates back to antiquity. Intended as capital punishment, it sometimes was used as a form of torture. Generally, a wagon wheel was used and the accused or convicted would be stretched over the wheel. Then they would be beaten. The spaces between the spokes would allow bones to break upon contact with a club or other device. If the device was used as torture, the accused would be removed from the wheel before death.

When the Wheel was used as a form of capital punishment, the convicted would be bludgeoned to death. Repeated hits from clubs, thick tree branches, or other implements would break bones. The mangled body of the convicted would be placed on display until death. In some instances, the dying convict would be kept alive as long as possible to drag out the painful process of awaiting death from broken bones.

Convicts on the wheel would be placed on public display. It was the hope of local authorities that keeping the tortured or convicted on display would deter others from committing heinous crimes. How effective this process was is unclear, particularly considering that the wheel remained in use through the nineteenth century.