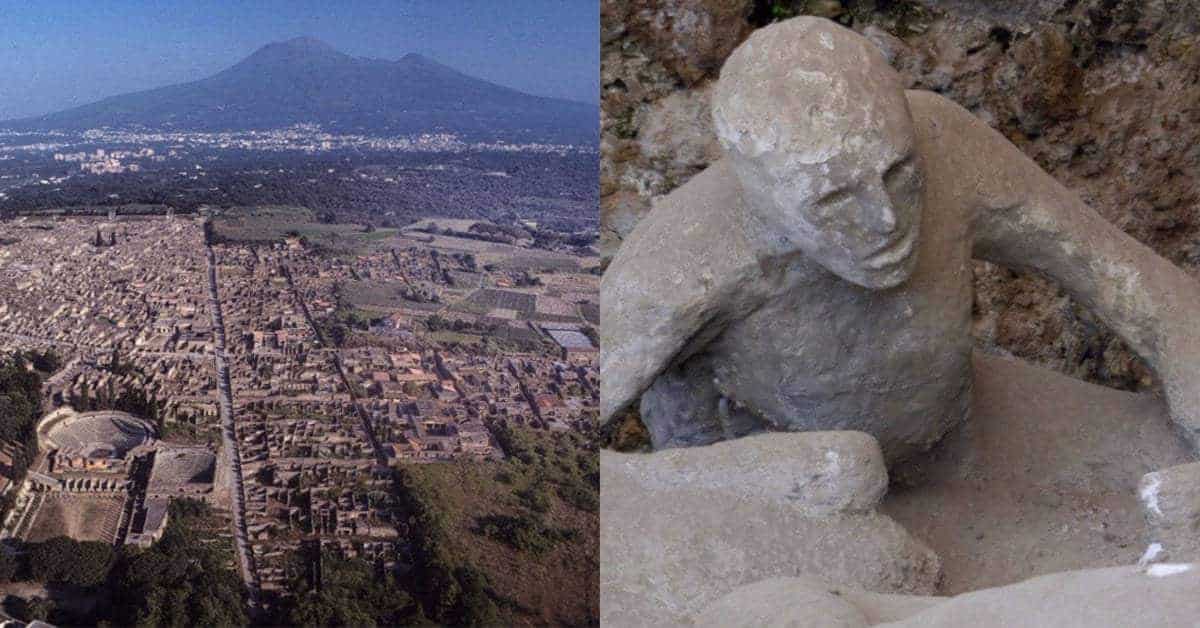 The bodies were used as props during Grand Tours

What draws 2.5 million tourists to Pompeii each year is the promise of a snapshot of real Roman life. With its immaculately preserved streets and villas; its brothel and its amphitheater, navigating the site—so we’re told—is the closest thing we have to step into a time machine. In reality, the fact that so many make the journey to the ancient site is credit to the deceptive abilities of those who manage it. And the best way to describe Pompeii, in truth, is as one elaborate illusion.

One of the earliest tricks played on tourists in the 18th and 19th centuries didn’t involve the town but the townsfolk. As luck would have it, royals, aristocrats and dignitaries who had come to gawp at the marvels of Pompeii would be blessed with the fortune of “discovering” Pompeii’s skeletons for themselves. More often than not, the shock of their discovery would give them the ideal springboard to launch into philosophical musings about the fragility of human existence or some other such subject. The English author Hester Lynch Piozzi parodied this perfectly after her visit to Pompeii in 1786 when she wrote:

“How dreadful are the thoughts which such a sight suggests! How horrible the certainty that such a scene might be all acted over again tomorrow; and that, who today are spectators, may become spectators to travellers of a succeeding century, who mistaking our bones for those of the Neapolitans, may carry them to their native country back again perhaps.”

The illusion didn’t stop with the Grand Tours, however. While almost everyone knows about the eruption that destroyed the town few people know about the devastation wreaked upon the site by Allied bombers during the Second World War. The truth is that, when US and British pilots bombed the area around Pompeii in 1943 in an attempt to dislodge German forces as part of Operation Avalanche, they destroyed vast swathes of the site, including the Large Forum and Amphitheater, which had to be entirely rebuilt.

So when you walk around Pompeii today, be aware that the roads below you, the walls around you and—in some buildings—the roofs above you are not from 2,000 years ago but from as little as 20. Such is the strength of the illusion that you can only admire how well they blend in.

Not all the remains come from those killed in the eruption

When we visit Pompeii, we like to imagine that the bodies we’re looking at that are those of Vesuvius’s victims; victims of the scorching pyroclastic flow, the deadly toxic gases or the lethal pumice stones raining from the volcano. Part of the reason for this is that it fits within the narrative of what we already know. And, let’s face it, there’s comfort in remembering and revising what we already know. Another reason for this is that we’re all guilty of time-capsule history; of assigning a particular moment to a place and forgetting what came before and, just as importantly, what came afterward.

Few people know that the volcanic eruption wasn’t the only natural disaster that befell that particular generation of Pompeians. The historian Tacitus (the pen pal Pliny later wrote to describing Vesuvius’s eruption) recorded a serious earthquake 17 years earlier in 62 AD, which reduced sections of the town to rubble. But though life in Pompeii may have changed dramatically in the wake of the earthquake, it didn’t stop. The same is to be said for after the eruption in 79.

And, while it’s unlikely any bodies from the earthquake were left lying around in situ in the 17 years before Vesuvius erupted, there’s little doubt that some of the humans remain recovered from the site date from the months, years and centuries after the eruption.

One such example comes from the House of Menander (named after the painting of the Greek dramatist of the same name found there). Three bodies were discovered—two adults and one child—armed with pickaxes in a room off the courtyard of this luxurious house. Archaeologists initially thought that they were trying to break their way out of the room when it collapsed around them. Flip this on its head though, and what’s to say they weren’t a band of looters who irreversibly weakened the already damaged structure as they broke their way in, making their looting ground their final resting place?

They tell us some amazing individual stories

One modestly dressed woman was found in a location now identified as a slave prison. Her cast is simple. But its only distinguishing feature—her manacles—raises a horrendous truth: she was a slave who had been shackled there, and was unable to escape. She would have been one of many thousands of Pompeii’s slaves (considering a typical Roman household might have anywhere between five to seven). But, unlike the millions of invisible, forgotten slaves of the Roman Empire, her figure has managed to weather the ages, still visible for all to see.

Another of Pompeii’s victims can be identified as a doctor, owing to the fact that his skeleton, found splayed out across the open-air exercise space of the palaestra, is still clutching onto his box of instruments. In another large house the remains of 12 people were found, including those of a heavily pregnant teenage girl (the fact that she was pregnant established by the bones of the fetus found in her abdomen). And it has led archaeologists to believe that the majority of these people were either slaves or relations, and that (unfortunately for them) they decided to stay at home and wait out the disaster rather than risk the girl’s health outside.

In Pompeii’s temporary gladiatorial barracks (the main ones were temporarily out of action), the remains of an ornately jeweled noblewoman were found in the company of several strapping men. This gave birth to the cliché rumor she was caught off guard by the eruption during an illicit visit to her gladiator lover. But as fanciful as this is, it doesn’t explain the fact that she was also found surrounded by at least 18 others, including a number of children who had taken shelter from the debris raining down from the skies.

One of Pompeii’s most famous and poignant casts is that of a man sitting down, his knees up to his chest and his hands raised to cover his face. It’s also one of the most misplaced: currently on display behind the bars of Pompeii’s site storeroom, his situation makes him more closely resemble a perpetual prisoner, lamenting his own confinement, rather than a dying man in his final moments.

It’s unlikely this man died doing what he loved

One image that has recently gone viral is that of a male Pompeii victim seemingly spending his last few moments on earth doing what—to put it delicately—he may have loved doing best. Simultaneously holding onto both himself and his loved one, his plaster cast reveals a facial expression of either immense pleasure or intense pain (considering the circumstances of his death, the latter was unfortunately, a given). But what can a closer look at this somewhat manual Pompeian man tell us about how he died?

Of the 1,150 bodies recovered, it’s believed that 394 were killed by falling pumice, described vividly in the contemporary account of Pliny the Younger: “They went out then, having pillows tied upon their heads with napkins; and this was their whole defence against the storm of stones that fell around them.” This man, however, doesn’t fall into this category. For a start, there’s no sign of cranial trauma; the only trauma instead coming from people unwittingly exposed to the image today in public or while at work.

Instead, we can confidently count him among the victims of the pyroclastic flow: a lightening fast current of boiling-hot gas and assorted volcanic matter which exploded from the volcano after a long, intense build-up of pressure (innuendo thoroughly intended). The sheer heat of this, estimated to have been at least 1,100 degrees Fahrenheit, would have made those unfortunate enough to be in its path enter cadaveric shock. And a part of this involves what’s called cadaveric spasm, which involves the involuntary stiffening of one’s muscles.