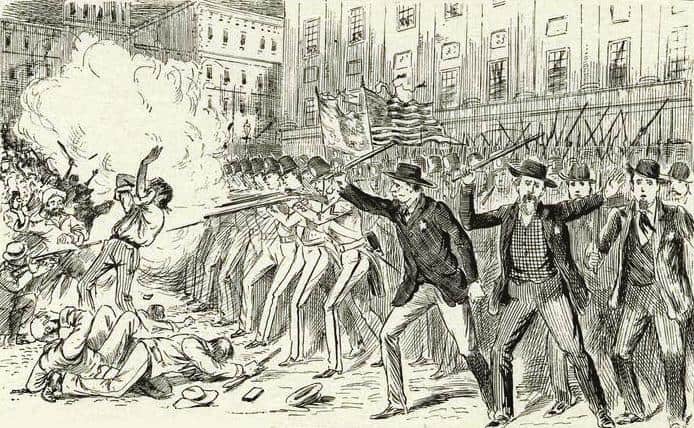 Violent youth gangs causing unrest by roaming city streets and assaulting hapless passersby have probably been around since cities first came into existence. However, it has probably been a long time since such youthful gang violence was driven by an intense dislike of the victims’ fashion choices. Once America’s youth got it into their heads that, come every September 15th, they were entitled to yank straw hats off of people’s heads and destroy them, it was tough to put that genie back in the bottle.

As many newspapers reporting on Pittsburgh’s 1910 straw hat disturbances noted, things were bound to get worse. They were right. Bad as Pittsburgh’s 1910 straw hat unrest and rioting had been, it was eclipsed by New York’s 1922 Straw Hat Riot, which put that of the Steel City to shame. It began in Manhattan’s Mulberry Bend, when some urchins decided to ignore the September 15th cutoff. Instead, they decided to get a head start on their annual crime spree, and began snatching and destroying straw hats on September 13th.

New York City kicked off the Straw Hat Riot by targeting some dockworkers. The dockworkers did not see the humor in it, got mad, and fought back. Things escalated, and that night, widespread mayhem and crime engulfed Manhattan. After getting their asses handed to them by the dockworkers, the kids regrouped in ever-larger and increasingly more violent gangs. Soon, mobs of out-of-control youth were snatching hats off heads, attacking people en masse, and beating up any who resisted.

The Big Apple’s 1922 Straw Hat Riot went on for days. The initial unrest and mayhem on the night of September 13th grew so widespread and got so bad that it halted traffic on the Manhattan Bridge. Police reinforcements were rushed in to end the rioting, but the relief was only temporary. The following night, the crime spree intensified when youth gangs returned to roaming Manhattan’s streets, some of them armed with nail-studded clubs. Straw hat wearers who crossed their path were lucky to get away with just losing their hats. The unlucky ones lost their hats and got beaten to a pulp.

1. An NYPD Lieutenant Made Parents Spank Their Delinquent Kids in the Precinct as a Condition For Releasing Them

Police were helpless, and the rioting went on for days, spreading from the East Side to the rest of Manhattan. The Upper West Side became particularly dangerous for the straw-lidded, as witnesses reported a mob of more than 1000 snatching straw hats on Amsterdam Avenue. The city’s days-long 1922 Straw Hat Riot was accompanied by many injuries and many arrests. However, since many culprits were underage, they did not stay behind bars for long, before they were released to their parents.

In the East 104th Street Precinct, the police lieutenant in charge insisted that the parents spank their kids then and there, as a condition for their release. The straw hat-smashing tradition continued. Although there was no recurrence of widespread rioting on the scale of 1922’s mayhem, the end of straw hat season continued to be attended by unrest and violence. In 1924, for example, one man was murdered for wearing a straw hat after September 15th. The violent tradition finally came to an end when straw hats went out of fashion during the Great Depression.

Blickle, Peter – The Revolution of 1525: The German Peasants War From a New Perspective (1981)

Cracked – The 5 Most Embarrassing Things Angry Mobs Have Rioted Over

Digital History – Holidays and the Invention of Tradition

Dunn, Alastair – The Great Rising of 1381: The Peasants’ Revolt and England’s Failed Revolution (2002)