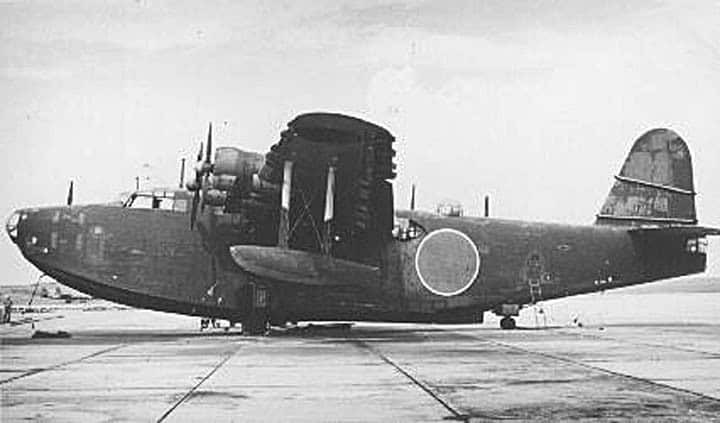 The plan called for the two planes to fly 1,900 miles from the Wotje Atoll in the Marshall Islands to French Frigate Shoals. There they would land and meet up with submarines that would refuel the craft before they flew another 560 miles to Hawaii. Once they were over Pearl Harbor, they would use the light of the moon to survey the area and bomb one of the docks used to salvage the damaged ships. But the odds of coming back in one piece from such a mission were slim. And from the beginning, there were problems with the plan.

A submarine that was supposed to report the weather conditions in Hawaii to the planes and recover the pilots if anything went wrong had been lost in February and couldn’t be replaced. And though the Japanese were able to read US Navy weather codes, the Navy changed the codes just before the attack, meaning that the pilots would have no idea what kind of conditions they were flying into. This would prove fatal to the plan as the clear, moonlit night the pilots had hoped for turned out to be obscured by a heavy layer of clouds over Hawaii.

As the pilots flew towards the base on the night of March 4, US radar installations picked up their signature and dispatched fighter planes to intercept them. Isolated and defenseless, Hashizume could only hope that the enemy fighters would be unable to find the planes in the clouds. As luck would have it, they did. But the weather also left Hashizume unable to see what he was flying over. Disoriented, Hashizume had to rely on a nearby lighthouse he recognized from his maps to fix his position. He gave the order for Sasao to follow him in as he attacked the base.

Sasao, however, couldn’t hear the order and turned his plane south. In a few moments, Hashizume lost sight of his wingman. Alone and disoriented, he dropped his bombs over what he hoped was the target. But Hashizume wasn’t even over the base. His bombs fell over the slopes of an extinct volcano on the island. The bombs landed a few hundred yards from a local high school, and the only damage was caused by the force of the explosions shattering the school’s windows. The only thing left for Hashizume to do now was turn back as planned.

Sasao meanwhile had missed the base completely. The islands were in a state of wartime blackout, leaving the naval base as the only source of light. But in the heavy clouds, Sasao still couldn’t see it. Ultimately, all he could do was fly the plane back towards the Marshall Islands, dumping his bombs into the Pacific. Luckily for the pilots, both men managed to avoid US aircraft while leaving the area. Sasao managed to touch down safely at their base at Wotje Atoll. But when Hashizume came into view over the atoll, he didn’t stop. There was something wrong with his plane.

Hashizume’s craft had suffered damage during the take-off from the refueling point, but he had felt confident enough to continue the mission anyway. Now he decided that the base at Wotje Atoll wouldn’t be able to repair the damage. Not wanting to risk losing the plane, Hashizume declared that he would instead fly to their home base at another distant atoll. Though he was already pushing the limits of his craft’s range, Hashizume managed to set the plane down safely at Jaluit Atoll, where the Japanese had a larger base. Hashizume had just completed the longest bombing sortie in history up to that point.

Both pilots had somehow survived the operation and even recovered their planes. But as the sun rose over the Pacific, it quickly became clear that Operation K had been a dismal failure. Back in Hawaii, the newspapers reported the explosions as the public marveled over the bomb craters left behind near the high school. However, no one was sure what had caused them. At first, the Navy and the Army both accused the other of jettisoning munitions near a civilian area. But once news got out that Japanese planes had been in the area the night before, it became clear that the craters were the result of a failed attack.

The raid led many to worry that they were in the early stage of a Japanese invasion of the island. But the odds of that were slim, as the Japanese were having trouble even putting together a follow-up mission to Operation K. Multiple plans were scrapped due to the exhaustion of the crews, weather conditions, and the damage to Hashizume’s craft. On March 10, Hashizume finally flew another mission. But with US planes in the area now on high alert, he was quickly shot down and killed near Midway Atoll.

Meanwhile, the raid had alerted the US Navy to the use of French Frigate Shoals as a refueling point for Japanese planes attacking Pearl Harbor. They quickly moved into the area and mined it to keep Japanese submarines out. With the loss of the refueling point, all plans to attack Pearl Harbor in the future were scrapped. Now unable to stop the repair efforts, the Japanese could only watch as the US rebuilt and rearmed several of the ships sunk during the original attack and sent them out to help smash the Japanese Navy.

A month after the failure of Operation K, the US launched their own daring bombing mission. The Doolittle raid saw over a dozen American bombers launched from a carrier in the Pacific to bomb Tokyo. And though none of the planes made it back, it did far more to shake the enemy’s morale than Operation K. And just six months after the attack on Pearl Harbor, the Imperial Japanese Navy suffered a crushing defeat at Midway. With their naval power broken, the Japanese were forced into a long retreat back to the home islands. The tide of war had shifted against the Japanese, and ultimately it led to the end of the Japanese ambitions in the Pacific.