The Haunting Last Messages From The Titanic 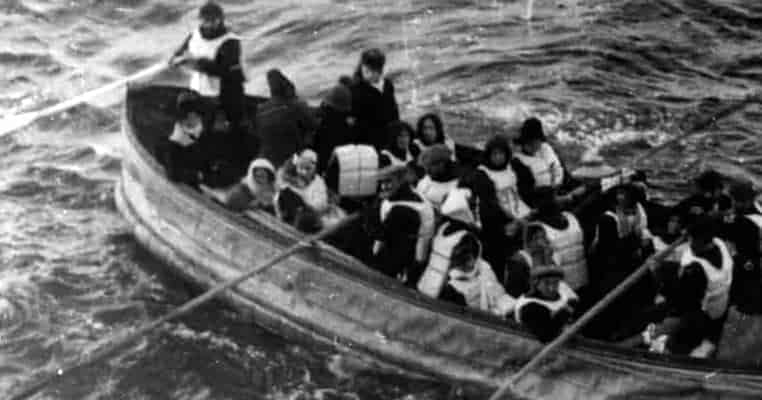 The Haunting Last Messages From The Titanic

In April of 1912, the wireless communication cabin of the R.M.S. Titanic held 25-year old Chief Telegraphist Jack Phillips and his 22-year old assistant, Harold Bride. They worked 24 hours a day listening to continental Morse code coming in from nearby ships, and tapped out replies. Little did these two young men know that their correspondence would be the only written records of a minute-by-minute account of what happened that fateful night.

In April of 1912, the wireless communication cabin of the R.M.S. Titanic held 25-year old Chief Telegraphist Jack Phillips and his 22-year old assistant, Harold Bride. They worked 24 hours a day listening to continental Morse code coming in from nearby ships, and tapped out replies. Little did these two young men know that their correspondence would be the only written records of a minute-by-minute account of what happened that fateful night.

Slips of paper were delivered with requests to send out messages on behalf of passengers, and they tapped away at the state-of-the-art machinery designed by Guglielmo Marconi. This was 1912, years before the invention of the satellite phones that are now used out in the open sea. Wireless communication on a boat was truly a luxury, and the wealthy passengers on the Titanic enjoyed splurging on the service provided by the ship. Their notes were typical short messages you might expect to see on the back of a postcard or a modern-day Tweet. Some messages were even romantic; “Hello, Boy. Dining with you tonight in spirit, heart with you always. Best love, Girl.”

The Unsung Heroes, Phillips and Bride

Many of the passengers on board of the Titanic were subtly trying to brag to their friends that they were having a great time, with a wish-you-were-here sentiment. Some of the messages were even practical, like hotel reservations for when they arrived in New York. The wireless operators were all just as young as Philips and Bride, joking around from boat to boat by calling one another “old man”.

Most of the messages were the sort that no one would ever believe would ever be studied by historians years later. In retrospect, the most bone-chilling correspondence that Titanic received was about the warnings of icebergs on the horizon.

At one point, Jack Phillips gets so annoyed at the interruption of constant ice warnings, that he even tells the Californian in Morse code to “shut up” so he can continue sending messages on behalf of the passengers. In later years, people wonder if Captain Smith really did get the message about the icebergs, or if Philips was simply too busy trying to finish his work to get up and walk away from the never-ending messages being sent by passengers.

The wireless cabin of the Titanic was nicknamed “The Marconi Room”. It had three separate rooms- the bunks for sleeping, the dynamo room, and the operating room. Phillips and Bride took turns sleeping. Harold Bride slept in the evening and took over at midnight until the early hours of the morning. That day, for whatever reason, Bride woke up earlier than normal. He saw that Phillips was struggling with a broken device. Maybe this was the distraction that stopped him from relaying in the message about the ice to the Captain. But if Harold Bride had not woken up at the time he did, they may have never been able to fix the machine, and the Titanic would have never been able to send a call for help.

The Beginning of the End

It was around 11:40PM when Captain Smith ran into the wireless room to let the men know that they hit an iceberg. According to Bride, they barely felt any impact. From their perspective, they believed it could not be very serious, and if anything, the flood doors could close off portions of the ship and keep it afloat. After all, it was supposed to be unsinkable. Captain Smith instructed them to get ready to send the distress call, but to wait for his order, because he still was not sure how bad the damage actually was. Ten minutes later, the Captain returned, confirming that they needed to send out the distress call right away.

“CQD. CQD. Titanic to all ships.” This was a distress call, followed by the ship’s coordinates. The other ships quickly replied. “What’s wrong?” They were not taking it seriously, at first. After all, they barely felt the bump, and the Captain Smith seemed to be calm, as well. When he returned to ask what they had said, they could hear the panic rising in his voice. This wasn’t a game. The ship was sinking. There was a debate among the young men whether they should send “CQD” or “SOS”, because apparently, SOS was the new version of a distress call.

Nearby ships, The Frankfurd and The Carpathia both replied to the distress call. Phillips frantically typed, “We have struck an iceberg and sinking by the head,” followed by their coordinates. After hearing their location, it was confirmed at The Carpathia was on their way.

Harold Bride described the panic as women and children were lowered into lifeboats, and there was so much water pouring into the ship, they knew that they only had a few minutes left to send their final updates to the Carpathia. Phillips gave the other ships an update; “We are putting passengers off in small boats. Women and children in boats. Cannot last much longer. Losing power.”

Philips continued to stand at the wireless while Bride wrapped a life jacket around him, and handed him a heavy coat. At the last moment, Philips reached The Olympic, and let them know about the disaster. Phillips typed, “This is Titanic. CQD. Engine room flooded.” In the midst of this panic, Phillips began to receive unnecessary messages, like one from The Olympic, which said, “Am lighting up all boilers as fast as we can.”

When too many people typed at once, it was impossible to make out the important messages that may be life-or-death, and Phillips was losing his cool at unnecessary information. “You fool… keep out,” Phillips snapped, “What is the matter with you?”

Bride stared at Phillips, only knowing that help was on its way, because of his friend. He later recounted the story. “He was a brave man. I learned to love him that night and I suddenly felt a great reverence for him to see him standing there sticking to his work while everybody else was raging about. I will never live to forget the work of Phillips for the last awful fifteen minutes.”

The Captain declared, “Every man for himself”, and the two operators were separated. Bride was incredibly lucky, because the last lifeboat was still on board. The passengers could not figure out how to lower it into the water, and there were no sailors in sight willing to help them. Meanwhile, Phillips typed out The Titanic’s last message: “Come quick. Engine room nearly full.” before going silent for good.

Even after attempting to lower the lifeboat into the water, the boat fell, and Harold Bride and the other passengers had to swim through the frigid water. The life jacket kept him afloat, and the passengers had to pull one another on board in the life boat. He was exhausted from swimming, and his body was numb from the cold. Everyone was so crammed on the boat, that another passenger was sitting on his feet as they twisted awkwardly, and it broke them. Despite feeling the pain searing through his legs, the emotional turmoil was far worse. Bride stared out at the water, and saw the body of his friend, Jack Phillips, clinging to debris from the sunken ship. He died from exposure.

After being rescued and boarding the Carpathia, Harold Bride was sent to the hospital wing, because both of his feet were broken. He stayed there for ten hours, when he heard that the wireless operators in the communication room were starting to go crazy from all of the frantic and traumatizing messages they were sending back and forth. He offered to help. He hobbled with crutches and the help of a nurse up to the communication room, sat in a chair, and did not stop working until they reached the shore.

The press wasn’t wasting any time trying to make the headlines. They were frantically sending messages to the Carpathia, asking for anything they could print in their papers. However, Bride ignored this request and continued to send messages on behalf of the surviving families who were aboard The Titanic.

After he was safely able to walk on land in New York City, Harold Bride gave his testimony about what happened to a reporter from The New York Times. At the end of his story, he explained that he still had over 100 messages left to send from the survivors. He wanted nothing more than to keep working, but the ambulance was insisting that they take him to a hospital.

“THRILLING STORY BY TITANIC’S SURVIVING WIRELESS MAN; Bride Tells How He and Phillips Worked and How He Finished a Stoker Who Tried to Steal Phillips’s Life Belt — Ship Sank to Tune of ‘Autumn'”. New York Times. April 19, 1912.

Life On Board: Greetings From The Titanic. Patrick J. Kiger. National Geographic.