The Midnight Massacre: The Worst mass murder at a POW camp in U.S. history 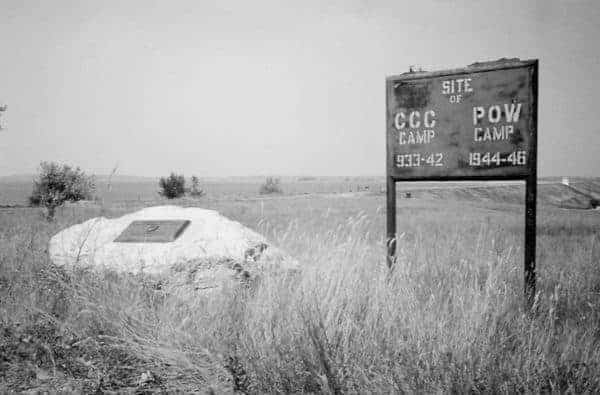 The Midnight Massacre: A WWII Rampage at a POW Camp…In Utah

On the evening of July 7, the 23-year-old Bertucci went out for a night on the town in Salina. He spent the evening drinking in a local bar, and, before returning to the POW camp, the soldier stopped by a cafe in town to talk with a young waitress. Before he headed to the camp, Bertucci told the waitress that “something exciting” was going to happen that night. The young soldier headed back to camp to report for guard duty.

Just after midnight, Bertucci scaled the guard tower. Mounted on the tower was a .30 caliber machine gun. Bertucci’s anger toward Germans and his bitterness at having missed out on combat came to a boiling point. Without any warning, he opened fire on the tents where the Germans were sleeping with the mounted machine gun. Bertucci cut back and forth across the tents, ripping them, and the bodies inside, to shreds.

A commanding officer yelled to Bertucci to stop his assault, and the soldier replied, “Send up more ammo! I’m not done yet!” Bertucci had fired 250 rounds into the tents. When the smoke cleared, 9 German soldiers were dead and 20 were injured. One man was nearly cut in half from the hail of bullets. The dead ranged in age from 24 to 48-years-old. Hospital workers recall that blood flowed out the front door of the building due to number of injured.

The act shocked the townspeople of Salina and Bertucci’s fellow military members. The dead German soldiers were buried in the Fort Douglas Cemetery, and were given Protestant services by Chaplain Frank E. Edwards. A choir made up of German prisoners from the Ogden, Utah POW camp performed at the funeral, and German POWs from the Salina camp were allowed to travel to Salt Lake City to bid their fellow soldiers farewell.

Clarence Bertucci showed no remorse for the rampage. He simply said his reason for the shooting was that he didn’t care for Germans. Bertucci was declared to be insane and was sent away to a mental hospital in New York. Not much is known about what happened to Bertucci after he was sent away. The only thing that is certain is that he died in 1969 at the age of 48, and he is buried in his native New Orleans. Bertucci was only one of three Americans prosecuted for killing enemy POWs during World War II.

In November 2016, the camp where Clarence Bertucci viciously murdered 9 German POWs opened as a museum. Visitors can now tour the grounds where a vengeful American soldier took out his anger on unsuspecting Prisoners of War.

While Bertucci’s violent rampage was shocking, sometimes German POWs in America took matters into their own hands as well. On at least two occasions at Camp Concordia in Kansas, German prisoners took matters into their own hands and organized a so-called “honor court.” These self-appointed courts tried, convicted, and executed German prisoners at the camp.

Camp Tonkawa in Oklahoma saw a similar incident in November 1943. A German POW named Johannes Kunze was brutally beaten to death by fellow German prisoners. The prisoners discovered that Kunze was passing along information about his fellow POWs to American captors at the camp. A court was convened, and Kunze was found guilty of treason by his countrymen.