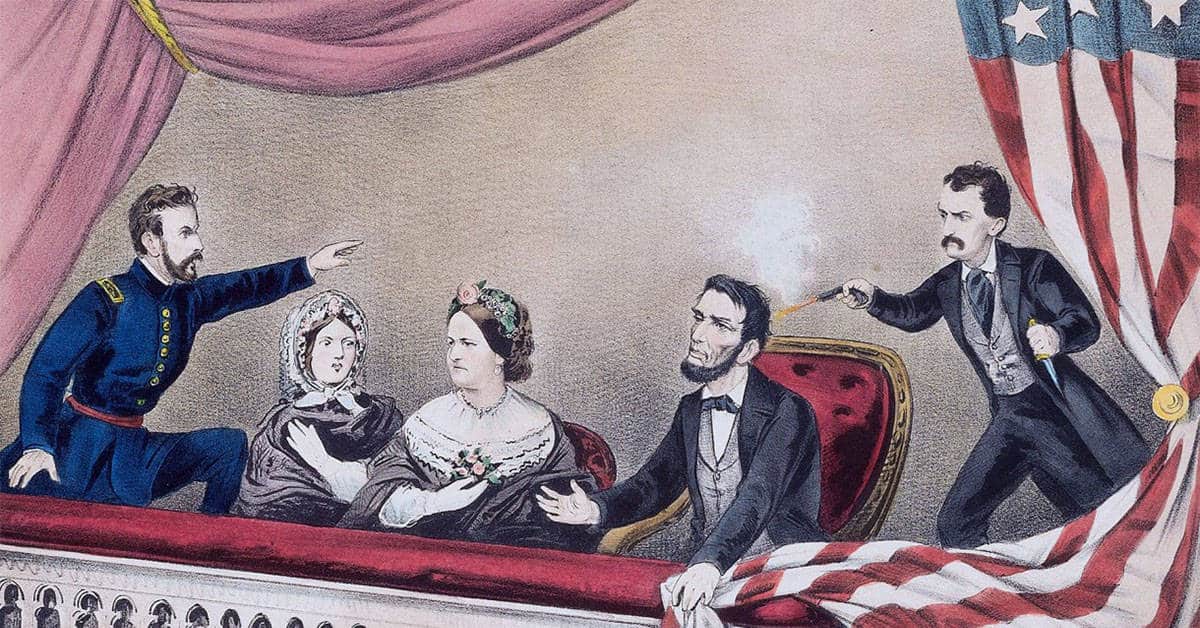 The Story of the Last Surviving Witness to the Lincoln Assassination

As the years go by, history grows and grows. More and more events are added to the tapestry of human existence and events that once seemed recent become increasingly shrouded, their memory more distant with every passing generation. In the last few years, we have seen the last living participants in the First World War pass away: with the death of Harry Patch in 2009 and Claude Choules and Frank Buckles in 2011, we mourned the last of those to see combat in World War I, while the next great European conflict, the Spanish Civil War, has just nine remaining soldiers.

Bertholt Brecht once wrote a poem entitled “Questions From A Worker Who Reads” that posited the idea that the stories of conquests and conflict should be told from the perspective of the participants rather than the victors or the great men of history:

“Who built Thebes of the 7 gates?
In the books you will read the names of kings.
Did the kings haul up the lumps of rock?

And Babylon, many times demolished,
Who raised it up so many times?

In what houses of gold glittering Lima did its builders live?
Where, the evening that the Great Wall of China was finished, did the masons go?

Great Rome is full of triumphal arches.
Who erected them?

Over whom did the Caesars triumph?
Had Byzantium, much praised in song, only palaces for its inhabitants?

Even in fabled Atlantis, the night that the ocean engulfed it,
The drowning still cried out for their slaves.

The young Alexander conquered India.
Was he alone?

Caesar defeated the Gauls.
Did he not even have a cook with him?

Philip of Spain wept when his armada went down.
Was he the only one to weep?

Frederick the 2nd won the 7 Years War.
Who else won it ?

Every page a victory.
Who cooked the feast for the victors ?

Every 10 years a great man.
Who paid the bill ?

So many reports.
So many questions.”

Our memory of conflict is linked with those we know and how they were affected. Modern warfare, so democratized in the way that it affects civilians as well as military personnel, in which more people have been affected than ever before, cannot be divorced from the stories of the average people that lived through it.

As a historian, I am lucky enough to be born into a time in which my personal associations with war are distant. My understanding of history and conflict, however, is built on the remembrances of my mother, raised during The Troubles in Northern Ireland, as well as those of my grandmothers, both survivors of the Second World War Blitz and even of my great-uncle, shell-shocked and scarred at the Battle of Somme in 1917. These ancestral links elevate historical events from the pages of textbooks and into real, lived experiences.

My father tells a story of a man he met in an Edinburgh pub, aged 96 years old, who told him stories of when he sat on his own great-grandfather’s lap in the late 19th century and heard tales of the Napoleonic Wars. It is these seemingly tangential lineages that make people like Samuel J. Seymour important.

If the name Samuel J. Seymour is new to you, then don’t fret: you’re in the same boat as most of America when he appeared as a guest on popular TV show I’ve Got A Secret in February of 1956. By then, Samuel Seymour was 96 years old and incredibly frail – the show’s producers advised him against making his debut television appearance but his doctors let him decide for himself – but he charmed the audience and the country with his astounding story.

The panel of guests – including celebrities such as Lucille Ball, Jayne Matthews, Bill Cullen and Henry Morgan – were allowed to ask Samuel Seymour questions from which they could discover his secret. Cullen was quick to deduce that, due to his age, the secret was indirectly linked to the Civil War era, while Jayne Matthews questioned him further and uncovered that his secret concerned Abraham Lincoln and that, Seymour was, indeed, a witness to the assassination of President Lincoln by John Wilkes Booth way back in 1865. Host Garry Moore then revealed that not only had Seymour seen the shooting in Ford’s Theatre, he was also the last surviving person to have done so.

The story as told on I Have A Secret astounded many in the watching public at home, but was only the tip of the iceberg. He had previously spoken at length about what he had witnessed in The American Weekly, a long-since defunct newspaper that specialized in tall tales, sensationalist stories and high-quality illustrations. Mr. Seymour’s story required no embellishment, over-selling or fancy pen work to merit its inclusion in the publication.

Samuel J. Seymour’s experience of one of the most shocking events in American political history remained clear to him, despite the incident occurring early in his childhood. He was just 5 years old at the time and living in Maryland, where he had been born. His family was well-to-do and lived in sufficient comfort to afford a maid, not to mention the ability to attend important theatrical events in Washington D.C.

In the article in The American Weekly, Samuel describes how he came to be in Washington that day:

“Even if I were to live another 94 years, I’d still never forget my first trip away from home as a little shaver five years old. My father was overseer on the Goldsboro estate in Talbot County, Maryland, and it seems that he and Mr. Goldsboro has to go to Washington on business – something to do with the legal status of their 150 slaves. Mrs. Goldsboro asked if she couldn’t take me and my nurse, Sarah Cook, along with her and the men, for a little holiday.”

When Mrs. Goldsboro, his godmother, told him that they were going to a play, the young Sammy did not quite understand:

“Sammy, you and Sarah and I are going to a play tonight,” she explained. “A real play – and President Abraham Lincoln will be there. I thought a play would be a game like tag and I liked the idea.”

He remembered the President well, and the horrific event itself clearly:

“He was a tall, stern-looking man. I guess I just thought he looked stern because of his whiskers, because he was smiling and waving to the crowd…All of a sudden a shot rang out – a shot that always will be remembered – and someone in the President’s box screamed. I saw Lincoln slumped forward in his seat. People started milling around and I thought there’d been another accident when one man seemed to tumble over the balcony rail and land on the stage.”

Initially, his fear was not for Abraham Lincoln, but for the man who had fallen from the balcony.

“Hurry, hurry, let’s go help the poor man who fell down,” I begged. But by that time John Wilkes Booth, the assassin, had picked himself up and was running for dear life. He wasn’t caught until 12 days later when he was tracked to a barn where he was hiding. Only a few people noticed the running man, but pandemonium broke loose in the theater, with everyone shouting: “Lincoln’s shot! The President’s dead!”

He reminisced on the event regularly:

“That night I was shot 50 times, at least in my dreams – and I sometimes still relive the horror of Lincoln’s assassination, dozing in my rocker as an old codger like me is bound to do.”

Samuel J. Seymour was an unwitting bystander at a tragic and shocking event, too young to understand what had occurred and probably too young to process it. Seymour would die just two months after his story made national news on I Have A Secret, in the house of his daughter in Arlington, Virginia, just over the Potomac River from Washington D.C.

The date of his death came two days before the 90th anniversary of the defining moment of his life, on April 14, 1956. His front-row seat at the theater of history would come early in his life and remain largely unknown until right at the end, but remains one of the most innocent and affecting the accounts of a seminal moment in the formation of the United States that we know today.

Samuel J. Seymour left behind him five children, themselves elderly, along with fifteen grandchildren and 35 great-grandchildren. To think of the memories that those children, who would now be well into their sixties if not older, must hold of their great-grandfather puts one’s mind to my father’s meeting with the nonagenarian in that Scottish pub, hearing stories of Napoleon, Wellington and Waterloo. History is never that far away.

History Collection – 24 Events During the Manhunt for John Wilkes Booth