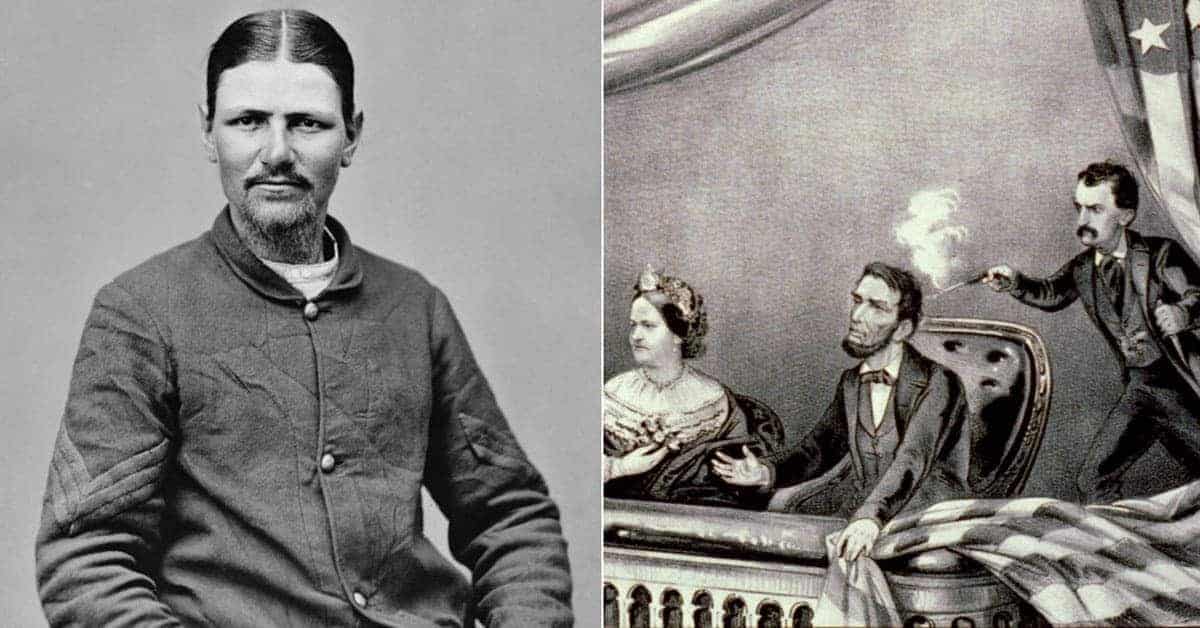 It is a fair comment to suggest that Lee Harvey Oswald’s assassin, Jack Ruby, is far better than known than Boston Corbett, the man who killed John Wilkes Booth; the assassin of President Abraham Lincoln. Even fewer people know what became of Corbett after his brief stint in the spotlight.

Sad to say, after receiving kudos, Corbett stepped back into the shadows from whence he came. The rest of his days were spent attempting to scrape a living, spending time in an insane asylum before he apparently died in a fire. Since he was one of the most famous men in America in 1865, where did it all go wrong Lincoln’s Avenger?

To understand his woes in later life, one only needs to look at his unusual existence before his brief brush with immortality. Thomas Corbett was born in London, England in 1832 but moved to Troy, New York with his family seven years later. In his youth, Corbett apprenticed as a hatter, an occupation he would return to at different intervals in his life.

The lack of health and safety regulations of the era led to regular exposure to fumes from mercury (II) nitrate which was used to treat fur that produced the felt on hats. Excessive exposure to this chemical routinely led to symptoms such as psychosis, hallucinations, and twitching; the latter of which was given the grim sobriquet, ‘the hatter’s shakes.’

Upon his return to New York City, he met and married a young woman. Sadly for Corbett, she died one year after their marriage in childbirth with their stillborn child. Understandably, this event broke him mentally, and he started drinking heavily and moved to Boston. Corbett would work during the day, and drift aimlessly around the city at night in a drunken haze.

On one such night, he encountered a street preacher who persuaded him to join the Methodist Episcopal Church. After his baptism, he changed his name to Boston and earned the nickname ‘Glory to God-Man’ due to his enthusiastic behavior at religious meetings. By this stage, Corbett grew his hair long to imitate Jesus and worked as a street preacher in the evenings. He was also known for warning his co-workers about their use of bad language.

By 1858, Corbett was well known as a religious fanatic, and on the night of July 16, 1858, he did something very drastic when temptation came his way in the form of two prostitutes. Corbett was so disturbed by the encounter that he castrated himself with a pair of scissors while reading Chapters 18 & 19 of the Gospel of Matthew. He ate his dinner and attended a prayer meeting before receiving medical assistance.

After taking several weeks to help, Corbett moved back to New York City and continued preaching street corners. The man of God’s religious impulses is what drew him to enlist in the United States Army during the Civil War. He joined the 12th New York Regiment two days before it set sail for Washington. Regarding his new enemies, Corbett reportedly told the women at his church: “I will say to them ‘God have mercy on your souls’ then pop them off.” Corbett had to remove his lengthy locks, but once in the army, he refused to put his country over God.

Corbett During the Civil War

By all accounts, Corbett was reasonably proficient with his weapon and never had an issue conforming to the army’s grooming standards and dress code. His religious fervor, on the other hand, got him into lots of trouble with his colleagues and higher-ranking officers. During a parade in Franklin Square in New York, Colonel Daniel Butterfield (a future general) was irate at his men’s inability to follow formation and swore angrily at them.

Corbett fearlessly stepped forward and said: “Colonel, don’t you know you are breaking God’s Law?” Butterfield apparently didn’t care and ordered the intransigent soldier to be thrown in jail. The indefatigable Corbett responded by singing hymns as loud as he could. Butterfield sent a messenger to warn the prisoner to stop, but Corbett refused.

The colonel offered to release him in return for an apology, but Corbett said the colonel had offended God. At some stage, Corbett was court-martialled for failure to follow orders and was sentenced to death. However, his sentence was reduced, and he was discharged in August 1863. Corbett joined Company L in the 16th New York Cavalry Regiment in the same month.

He was captured by the Confederates in June 1864 and spent five months in the infamous Andersonville prison. Corbett was released as part of the prisoner exchange program in November and was treated for malnutrition, scurvy, and exposure. When he returned to the army, he was promoted to Sergeant. He also testified in the trial of Henry Wirz, the commander of Andersonville.

The Death of Booth

The North’s celebrations at the South’s surrender were short-lived because, on April 14, 1865, President Abraham Lincoln was assassinated at Ford’s Theatre in Washington. The War Department put a total of $100,000 on the heads of the President’s killer, John Wilkes Booth, and his suspected accomplices David C. Herold and John H. Surratt.

Booth and his accomplices were still at large 10 days after the shooting, so the government turned to the 16th New York Cavalry Regiment for help. After a day of unsuccessful searching, the group received a tip that Booth and Herold were seen heading towards a place called Bowling Green in Virginia’s Caroline County. After threatening an innkeeper who knew the whereabouts of the fugitives, the Regiment was led 12 miles to Garrett’s Farm at Port Royal.

The leader of the Regiment, Edward P. Doherty, soon learned that Booth and Herold were in the tobacco barn. Doherty ordered the men to surrender, and while Herold did so after a few hours, Booth refused. The Regiment set the barn on fire, but Booth remained steadfast in his refusal to surrender.

Details of what happened next are unclear although Corbett claims he was watching Booth intently from his vantage point and only shot him when the assassin raised his gun. Booth died from his wounds several hours later, and government officials were furious; they had wanted Booth alive so he could provide some answers. Amongst the public, however, Corbett was a hero.

Corbett was proclaimed a hero by the public as soon as Booth’s body arrived in Washington Navy Yard. However, prominent police officers and the Secretary of War, Edwin Stanton, were absolutely furious. There was even a possibility of another court-martial, but given Corbett’s newfound popularity, such an action would surely have caused an uproar. Corbett was a folk hero for a short time and was photographed by the most famous photographer of the era, Matthew Brady. He even went on a ‘publicity tour’ but as they say, all good things come to an end, and Corbett was soon forced to return to regular life once the country was eager to move on from the civil war and the death of Lincoln.

As Surratt escaped (his mother was hanged as an accomplice), the Regiment received $75,000 in reward money. Detective Conger and Lafayette Baker received the lion’s share; $17,500 apiece. Despite killing Booth, Corbett received just $1,653.85. There is a suggestion that he was robbed of his money soon afterward and whatever happened to the cash, it didn’t sustain him for long.

Corbett’s brief attempt to earn money on the lecture circuit failed, and he reverted to his hatter trade by 1869; this time in Philadelphia. After a few years, he was all-but hounded out of the city after receiving threatening letters; probably from Confederates angry at him for killing Booth, and he was also harassed on the street. Corbett became increasingly paranoid and carried a pistol at all times in the belief that Booth’s Avengers would try to kill him.

At a Soldier’s Reunion in Ohio in 1875, a group of men questioned whether Corbett killed Booth at all. Corbett was incensed and pulled out his gun; he was subsequently removed from the meeting. He finally had enough abuse from the public, so in 1878, he settled 1,500 miles from home; in Cloud County, Kansas. Corbett built a one-room home with rocked walls and a wooden floor.

For the rest of his life, Corbett would draw his gun and occasionally fire warning shots if anyone came near the house. In 1882, he pleaded for disability benefits he believed were owed for his time in the army. His situation was so bad that he dug his own grave. Finally, in 1886, a veteran’s organization offered him a job at the Kansas State Legislature in Topeka. Corbett worked there as an assistant doorkeeper. Sadly, his mental state got the better of him, and he brandished his gun in the statehouse one day. The officials had him placed in a mental asylum in Topeka in 1887.

On May 26, 1888, Corbett broke out of the asylum and told a friend he was heading to Mexico. That was the last time anyone saw him alive. Most reports suggest he died in the Great Hinckley Fire of 1894 in Minnesota which claimed the lives of over 400 people. There is a Thomas Corbett listed among the dead. Corbett’s last known residence was in a forest settlement near Hinckley.

Various imposters claimed to be Corbett, including one who was a full eight inches taller! We have to assume that Lincoln’s Avenger died in the fire, a tragic and painful end to a life that was filled with torment and agony. While the avengers of a ruler’s death were often lauded and presented with gifts, Corbett was reviled and mocked until he was forced to flee.

The Trial of the Lincoln Assassination Conspirators – Famous Trails