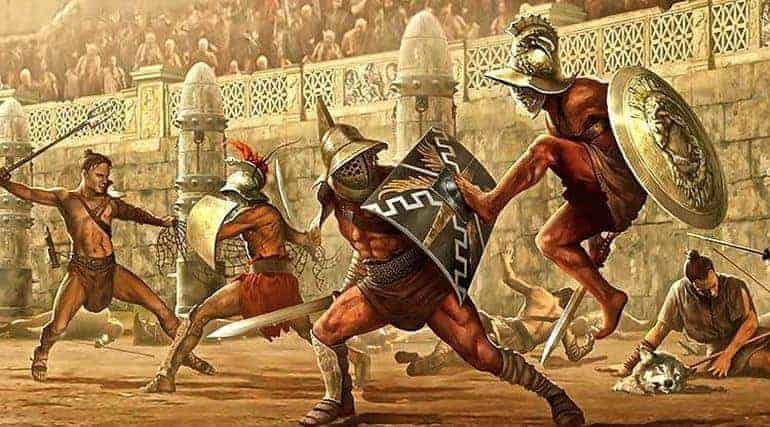 Before the discoveries of Herculaneum and Pompeii (two cities destroyed by the eruption of Mount Vesuvius in 79 AD) in the 18th century, we knew relatively little about the lives of gladiators. We were reliant on ancient texts and the occasional artifact to glean knowledge of these fearsome warriors. The remains at the two locations above helped historians form a clearer picture of who the gladiators were, how they fought, and how they died.

A Brief History of Gladiatorial Combat

The first recorded gladiator games were organized by two Etruscan sons in 264 BC to commemorate the death of their father. However, the first ‘official’ games didn’t begin until 105 BC. Gladiatorial combat was a way for the aristocracy (and later, Emperors) to display their wealth, celebrate military victories and birthdays, mark visits from prominent officials, or distract the people from the various social and economic problems they faced.

Emperor Vespasian ordered the construction of the Colosseum in Rome which began in 72 AD, but he died before its completion. Titus opened the Colosseum in 80 AD with a spectacular 100-day festival of gladiator games. Construction was finally completed in around 96 AD during the reign of Domitian, and events regularly attracted crowds of up to 50,000 people. Notably, women were allowed to compete until Septimius Severus banned them in 200 AD. Honorius outlawed the games in 404 AD, some five years after closing gladiator schools. Apparently, the final straw came when a monk, who jumped between two fighters in combat, was stoned to death by the outraged crowd.

Who Were the Gladiators?

Although a large percentage of combatants were conquered peoples, slaves or criminals, a number of free men decided to fight. Those who weren’t forced into the arena did so because the rewards were potentially immense. These men usually came from a low social standing and hoped to become popular with crowds and win patronage from wealthy Romans.

By the time the Colosseum opened, the games were well organized with warriors placed in different ‘classes’ depending on skill level, experience, and previous records. There were several types of gladiators including:

While these individuals had to fight one another, sometimes to the death, they formed close bonds and created unions called ‘collegia’ with leaders. Whenever one of the brotherhood died in battle, the union would ensure they received a proper funeral and an inscription honoring their achievements. The family of the deceased even received financial compensation.

Life as a gladiator wasn’t easy, but the rewards were worth the risk, even for those not forced to participate. Portraits of great gladiators hung in public places, kids made clay figurines of these warriors, and the best fighters even endorsed products. Roman women loved gladiators and considered the sweat of these men to be an aphrodisiac. But how did these individuals live and die?

The Life of a Gladiator

There were three major gladiator training schools, with Capua probably the most famous for producing high-quality fighters. It wasn’t unusual for agents to roam the empire to find potential gladiators; then they would try and persuade them to come and fight. Obviously, slaves and prisoners of war had no say in the matter.

Although free men were not hauled into the arena in chains, they had to live a disciplined life once they agreed to join a school. Most gladiators ate three decent meals a day which included meat, fish, cereals, vegetables, eggs, cheese, and goat’s milk, with water the only other drink. Even free men were shackled and slept in cells; they were only freed for mealtimes and training; no one was allowed to speak during mealtimes. On the plus side, they received massages along with hot and cold baths because hygiene was crucial. Gladiators had to be incredibly fit, but most had some extra ‘padding’ around the midsection to protect vital organs from minor wounds.

Training was intense, but in the beginning, the focus was on increasing the fitness of the gladiators. As a result, initial combat involved wooden swords in honing the fighters’ technique and teaching them different fighting styles. The precise type of training they received depended on how much armor they wore; heavily armored warriors needed to learn different methods than lightly armored gladiators for example.

Fighting in the Arena

Gladiators only fought 3-5 times a year on average. On the evening before an event, a banquet was held for combatants who were told to enjoy themselves because it could be their last great meal. Contrary to popular belief, most gladiators didn’t fight to the death. According to some historians, fewer than 20% of them died in the arena. If the crowd was bored by a long-drawn-out affair, a stalemate could be declared. Alternatively, both warriors could leave if they thrilled the audience with a brave battle.

Those who ran gladiator schools didn’t want their fighters to die because each man and woman was an expensive investment. It is possible that trainers taught their warriors how to wound and not kill opponents while gladiators were probably reluctant to kill their ‘brothers.’ Despite the relatively small death rate during combat, the average life expectancy of a gladiator was only in the mid-twenties.

When a gladiator was overmatched and faced inevitable defeat, the crowd could decide his fate. The wounded person sometimes held up his finger as a request to be spared, but the crowd could shout for his death if they felt he didn’t put up a good enough fight. If the emperor was in attendance, it was usually left to him to have the final word. Incidentally, the ‘thumbs down’ signal didn’t necessarily mean ‘death.’ A ‘thumbs up’ could have meant death while signs of mercy might have included the ‘thumbs down‘ or a clenched fist with two fingers extended.

If a gladiator had to die, his opponent plunged their weapon into the victim. Apparently, an attendant dressed as Pluto appeared afterward to strike the body with a mallet, someone else checked to ensure the person was dead and the corpse was finally removed. The winner received money and a laurel branch and would run around the arena waving the palm. For free men, the goal was to earn as much as possible before retirement. Slaves hoped to one day win enough to buy their freedom. If a gladiator had an outstanding career and was allowed to leave the school, he would receive a wooden sword as a sign that he no longer had to risk his life in the arena.

Time Magazine – Where Does the ‘Thumbs-Up’ Gesture Really Come From?

Quora – Did The Romans Free Gladiators After Winning Their Freedom?