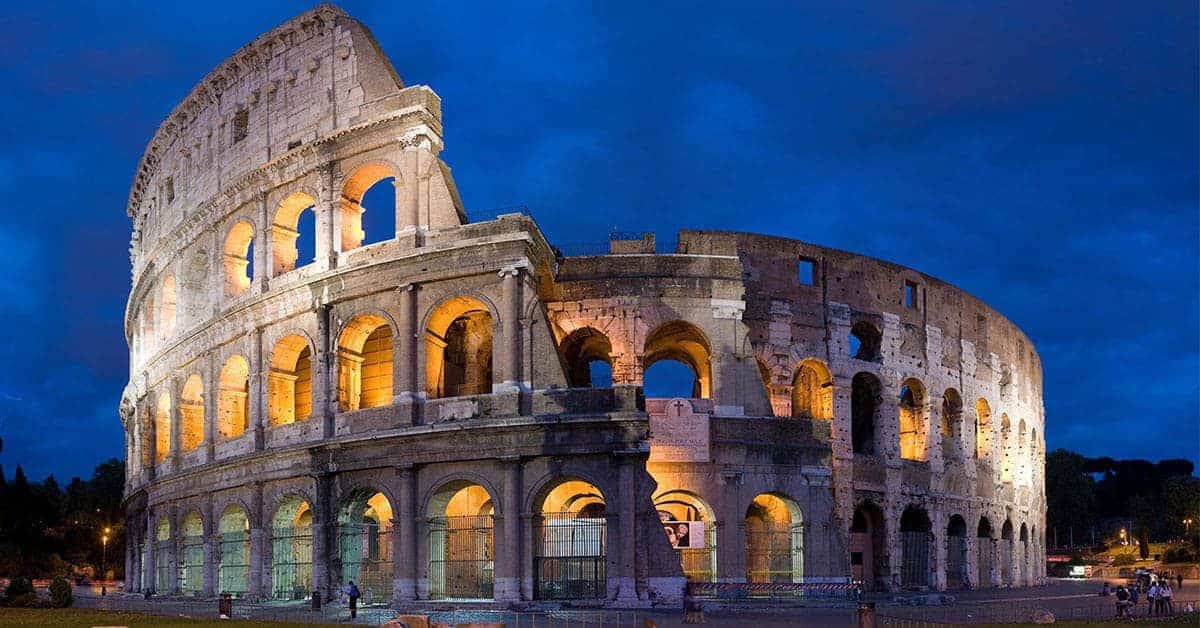 In Rome’s historic center there are two sites in particular that preserve the Eternal City’s incredible past: the Roman Forum and the Colosseum. Tourists flock to the Forum to wander among the (especially ruined) ruins of the temples, basilicas and official buildings that made up the beating heart at the center of Rome’s empire. Less than five minutes down the road, tourists line up for the Colosseum; marveling, once inside, at the architectural wonders around them and reflecting on the brutality of the slaughter that took place below. What few people know, however, is that at the entrance to the Forum, the Romans left us the story of how they built the Colosseum.

The modern site of the Forum begins at the top of the Via Sacra, ancient Rome’s main road stretching from the Colosseum to the Capitoline Hill and cutting through the Roman Forum. It was along this road that successful generals returning from war would celebrate their triumphs: riding in a chariot with their faces painted red and a slave whispering in their ear to remind them they were only mortal. When you enter the Forum through today’s entrance, the first stop is a large arch—the Arch of Titus. Built-in 82 AD by the emperor Domitian, it commemorated the conquest of Jerusalem in 70 AD by Domitian’s recently deceased brother Titus.

Most tourists congregate outside the arch to take their holiday snaps and selfies, but the real rewards are hidden within. Stand under the entrance and look at the walls on either side and you’ll see two incredible reliefs, still remarkably preserved after nearly 2,000 years. The one on the right shows Titus’s army marching along the Via Sacra during their general’s triumph of 71 AD. Titus rides behind his men in a chariot, flanked by the goddess of victory (winged because victory is fleeting). Not shown on the relief is the enemy leader, Simon bar Giora. Following tradition, the Romans paraded him through the streets during the triumph before having him executed, thrown to his death from the Tarpeian Rock.

The relief on the left shows the triumphant Roman soldiers carrying spoils taken from the Second Temple of Jerusalem. Among the spoils are: the seven-branched candelabrum (or “menorah”)—a centerpiece in Jewish ritual according to Exodus (27:21)—an ark identified by some as the Ark of the Covenant, and the Temple’s Gold Trumpets. How do we know that these are spoils from the Temple? Because the Jews told us themselves, not through their writings or through their spoken histories but through a type of evidence you probably have in your pocket right now: coinage.

Another spoil from the Temple, depicted on the relief on the left, is the small chalice that sits atop the Shew Bread table. It might be barely noticeable to the untrained eye—especially given that today nobody is allowed to pass under the arch—but it’s an image that crops up everywhere on the coinage of the Jewish War. In fact, one of the main issues minted by Jerusalem’s rebels during the second year of the war (66/67 AD) was a shekel depicting this exact same chalice on its obverse.

We don’t know exactly what the chalice’s significance was. It could have been God’s Cup of Fury or Cup of Trembling, mentioned in the Book of Isaiah (51:17). It could also have been the cup that contained the omer, the first grain harvest. Whatever it was, we know it was powerfully symbolic. After all, why would the rebels have taken the time to mint coins with its image if it wasn’t, and why would the Romans have taken the time to gloatingly inscribe it on their triumphal arch?

The Romans had good reason to gloat about their victory in Judaea. What started off as a rebellion in 66 AD had soon flourished into a war that was costly, time-consuming, and phenomenally difficult to bring to an end. More importantly, it had been thoroughly unnecessary: brought about by gross incompetence and insensitivity on the part of the Roman administration in Judaea. In around 50 AD, a Roman auxiliary soldier had caused a riot and massacre in the Temple of Jerusalem when he exposed his genitals to the crowd. Another had stolen and torn up the Scrolls of Law found in a Judean village. Finally, the Roman procurator Gessius Florus had managed to offend Jerusalem’s entire Jewish population by stealing money from the treasury of the Temple of Jerusalem.

In 66 AD the Roman garrison at Judea was overrun. Reinforcements were immediately sent in the form of the Legio XII Fulminata, but they were ambushed and destroyed by Jewish rebels en route to the provincial capital. Command passed to Vespasian in 67 and, with his son Titus as second-in-command, he invaded Galilee and started besieging Jewish strongholds. Then, in June 68 AD, disaster struck. Having completely alienated his support base back at home, the emperor Nero committed suicide. This created a power vacuum at the center of Roman government; the months following Nero’s suicide in June 68 seeing Rome get through more emperors than Trump gets through communications directors.

First, there was Galba, the governor-general of Spain, who was assassinated in January 69. Galba was replaced by Otho, the governor of Lusitania. But he only made it until April; entering into an unwinnable war with his rival Vitellius, Otho opted for suicide, stabbing himself through the heart with a dagger one morning. Vitellius was then declared emperor. But even he couldn’t manage any more than seven months. Seeing his opportunity to take the purple, Vespasian returned to Rome. Leaving Titus in Judea to finish off the revolt, he arrived in December, bringing about a violent end to Vitellius’s short-lived reign (the unfortunate Vitellius was dragged through the streets and lynched by an angry mob before his lifeless corpse was thrown into the Tiber).

As the fourth emperor in just over a year, it’s easy to see why Vespasian would have wanted some stability. He was no fool, and he knew that one of the surest ways to do this was to appease the masses. He waited for Titus to finish the job of capturing and completely destroying Jerusalem, which he did in the summer of 70 AD. The sack of Jerusalem involved the deaths of millions—something we know from the Roman-Jewish historian Josephus who lost both his parents and his first wife in the event. Vespasian then set about striking coins to reassure the masses of Rome’s military dominance, circulating one issue inscribed with the text IUDEA CAPTA (“Judea captured”).

However, the pièce de résistance of Nero’s Golden House was a giant bronze statue, some 35 meters high, which depicted Nero as either Apollo or the sun god Sol. In Latin, the statue was called the Colossus Neronis, and it is from this that we derive the word Colosseum. Indeed, the Romans would not have known the Colosseum by its modern name, but would have instead gone by the Amphitheatrum Flavium or the “Flavian Amphitheater”.

The structure of the Colosseum was finally completed in 80 AD under Vespasian’s son, Titus. Titus hosted a series of inaugural games that lasted for over 100 days and included events such as gladiatorial fights, reenactments of historical and mythological battles, the execution of countless criminals and the slaughter of more than 9,000 animals. The violence at these games was extraordinary (as it would be in games throughout the rest of the Colosseum’s pagan life). But considering the fact that the Colosseum had been built off the back of extreme violence—the slaughter of millions of men women, and children in Judea—such violent games were a darkly fitting way of marking its inauguration.