The Secret Lives of Female Gladiators 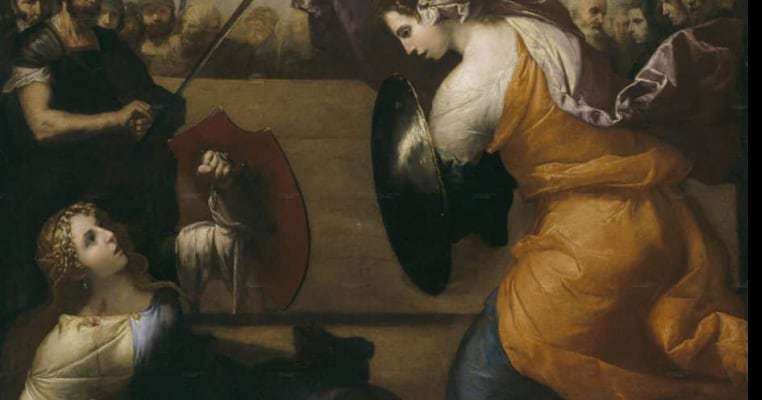 The Secret Lives of Female Gladiators

The Roman Empire spanned across several continents over a 1,500-year imperial history, and its influences expanded far beyond the city of Rome. Its famous Colosseum still stands in Italy today, but there were so many more stadiums built to house their famous gladiator battles.

When most people think of the Roman Gladiators, they think of the men who were captured as prisoners of war and forced into battles to the death for the sake of entertainment. In many cases, this was true, and men became motivated to train as hard as they could, because there was a chance to win prize money that could make a man rich enough to buy his freedom and return to his family. However, many high-class men in society chose to become career Gladiators of their own free will, despite the fact that it meant a much shorter lifespan.

Gladiator battles were a popular form of entertainment, and show-runners were almost like circus ringleaders. They were always trying to think of ways to sell more tickets across the empire. One of the ways to keep people coming back was by including some comic relief to mix up the blood and gore. At first, the idea of women fighting as gladiators was considered to be hilarious. They were, pitted against dwarves and animals. Women were not in any danger of losing their lives. They were simply performers who were there to rile up the crowd.

Female gladiators, or a “gladiatrix” wore nearly the same costume as their male counterparts, which meant that they were topless, and only wore a loincloth to cover their lower half. They also wore grieves to cover their legs and arms. These women were also sometimes called “The Amazons”, since they were meant to evoke the legends of the powerful women. These beautiful, powerful Amazonians quickly grew a fan base among Romans. People came to see the same performers again and again as they grew stronger and better at fighting in the Colosseum. Dolls, oil lamps, and pieces of art were made in the likeness of both male and female gladiators that spectators could purchase and take home as souvenirs.

More and more women eventually wanted to join the competition as a Gladiatrix. Rather than token performances, they began to actually fight one another in tournaments where they were eligible to win prize money. They were never allowed to go up against the men, but female fighters were paired off in fights against one another. Just like modern-day wrestling, each woman was given a character with a story arch, along with weapons and costumes.

Roman women had very little power in their day-to-day lives. They were normally not allowed to make any decisions with money on their own, without their father or husband’s consent. If a woman in high society lost her father or husband during battle, she was assigned a male tutor to take care of her administrative tasks. Female Gladiators were some of the first truly independent ladies in history, because they chose a life where they would earn their own income, fame, and glory without being beholden to their fathers or husbands.

Male gladiators all went through a training camp, even if they were former soldiers. The style of fighting was over-dramatized, and completely different than a real fight. The only way for women to learn these skills was through private tutors, or a man in their family who was willing to teach them how to fight. Because of this, it would suggest that only women who came from higher-class families could afford to pay for a tutor in the first place. There is no evidence that women were ever given their own training camp or barracks the way that men were.

For women, becoming a Gladiatrix meant that she was no longer eligible for marriage. Even though they were admired for their athleticism and ogled at by men, they were described as low-class, undesirable, and untouchable. Due to the fact that women may ostracize themselves from ever getting married, and the fact that they would need someone to teach them how to fight, it has been theorized that any woman who was not a sex worker that would have even considered becoming a gladiatrix would have been born into a wealthy family. Some theorize that if a noble woman chose this life for herself, it may have meant that she was a lesbian. In fact, there is even evidence of girl-on-girl romance in their performances.

A marble slab souvenir from a popular Gladiatrix performance in Turkey was called Amazon and Achillia. This would have been a reenactment of the legend of Achilles. In the legend, Achilles kills Penthesilea, the Queen of the Amazons. When he takes off her helmet and sees her face, his heart breaks. She is so beautiful, and she fought so bravely, he knows that he killed an amazing woman that he would have imagined marrying. He will never know if they were meant to be, because he chose violence over diplomacy. In the Gladiatrix version of the story, the Penthesilea character, simply known as “Amazon”, survives. The two fall in love, and get to be together. While the battle ended in a draw, the story was so satisfying for the audience, the crowd burst into an explosion of cheers. Both women won a prize in the end. According to archaeologists, the battle must have been truly epic to watch, because not every battle was commemorated with a marble plaque. It was only the stories that were so good, people would have been telling the story far and wide to anyone who would listen.

Considering that they were in an entertainment professional and performed half-naked, a gladiatrix was categorized in the same type of employment as a sex worker. In 20 B.C., Clodius Flaccus was a showrunner in Pompeii who organized a festival in Apollo’s honor. He arranged several festivities and forms of entertainment, including 5 sets of female fighters and 35 pairs of male fighters. He advertised this well ahead of time, and people traveled far and wide to see this. The female fights were always packed to the brim with spectators, since it was so unlike anything they had seen before. In cases like this, it’s very possible that Flaccus may have hired prostitutes to play the roles of the gladiatrix, if they were only meant to battle during the festival.

Male gladiators were seen as sexual objects, and it is rumored that wealthy noble women paid to spend some time with their favorite fighters. It would only make sense, then, that the same could have been said of female gladiators. Women were forbidden from entering the barracks where gladiators slept, but in the remains after the eruption of Pompeii, a woman’s skeleton was found among all of the male fighters, which proves that they still found their way into the boy’s club.

Watching women fight for entertainment purposes was all well and good, until they began showing interest in becoming professional athletes. In 200 AD, Emperor Septimius Severus traveled to Greece to watch the Antiochene Olympic Games. Emperor Severus went saw that while women were not allowed to participate in the official Olympic games, they were training their bodies as athletes and playing recreational sports in their spare time. Unlike the female gladiators Grecian women were not ostracized for playing sports. The were not seen as lower-class citizens, they were still allowed to get married, and it was simply an admirable thing for women to play sports.

The emperor heard many men joke that women took their sports so seriously, they may actually want to compete in their own Olympic games someday. Severus could see the parallels between the athletic lady gladiators who took their battles very seriously. Huge crowds formed around these female sport competitions, because it was seen as such an anomaly. If he allowed women to continue battling, it would only be a matter of time before they wanted to compete in the Olympics, as well. When he returned home from the trip to Greece, Severus declared that it was illegal for women to compete as gladiators.

The memory of female gladiator battles began to fade into obscurity, as well as the stories of the individual women who devoted their lives to performing. Thankfully, not all of them have been forgotten. A tomb was found in a small cemetery just outside of the Roman Colosseum built in London. At the time, honorable burials were all made outside of the city, and this makeshift cemetery would have been designated for anyone who was considered to be a social outcast. They found the remains of a woman in her 20’s. She was burned in a funeral pyre, and her charred bones and ash were carefully surrounded by gladiator ephemera. It is theorized that she was a gladiatrix who died during battle. Despite the fact that she was not allowed to marry, and she was forced to be buried in such a dishonorable place, people still loved her enough to make sure she was surrounded by evidence of her glory.