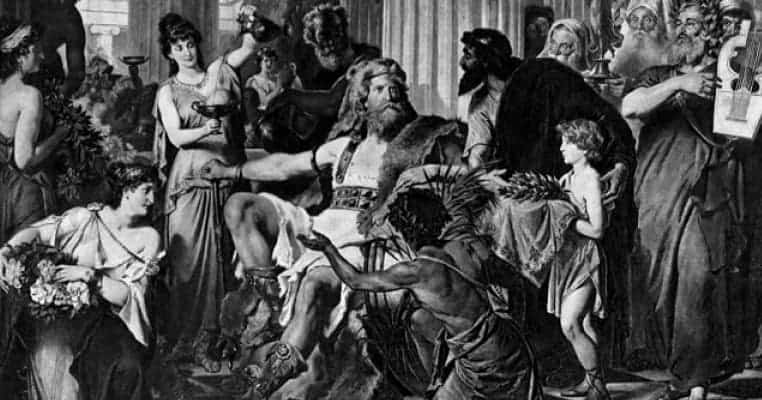 The death and burial of Alaric 1, feared leader of the Visigoths, in 410 A.D., is surrounded by mystery and legend. He was buried according to Visigoth tradition, and because of that, his grave has never been found. And that’s the first part of this mystery. The great king was buried according to the Visigoth customs of the day, in what is now Cosenza (formerly Cosentia), Italy.

The burial itself was a complex affair that required the king to be buried under the confluence of the Busento and Crati rivers. And to do that, slaves were required to temporarily divert the course of the river, so that Alaric’s enormous tomb, which included his horse, and tons of precious silver and gold could be interred. Also included was a priceless Menorah that the Romans looted from a sacred temple in 70 A.D. Once the king’s grave was in place, the river was again rerouted to its original course in the hopes of hiding away the location forever. Then, according to legend, the slaves were killed to keep them from revealing its location.

Much of the information about the burial of Alaric 1 comes from the writings of Jordanes, a sixth-century Roman historian who wrote about the Goths.

“Turning from its course the river Busentus, near the city of Cosentia, they led a band of captives into the midst of its bed to dig out a place for his grave,” he wrote in his A.D. 551 account De Origine Actibusque Getarum (The Origin and Deeds of The Goths.) “In the depths of this pit they buried Alaric, together with many treasures and then turned the waters back into their channel. And that none might ever know the place, they put to death all the diggers.”

In his six-volume series, The History of The Decline and Fall of The Roman Empire, Edward Gibbon (1737-1794) appears to confirm this, having written:

“By the labor of a captive multitude, they forcibly diverted the course of the Busentinus, a small river that washes the walls of Consentius. The royal sepulcher, adorned with the splendid spoils and trophies of Rome, was constructed in the vacant bed.

“The waters were then restored to their natural channel and the secret spot where the remains of Alaric had been deposited was forever concealed by the inhuman massacre of the prisoners who had been deployed to execute the work.”

So while we have at least some information regarding the location of Alaric 1’s grave, it’s location still remains a mystery. One that even drew in German Chancellor Adolf Hitler, who never missed a chance to plunder gold when he was able to.

Under the Nazis, the German economy was heavily focused on the military, and near the end of the 1930s, the enormous war machine began running out of money. The country’s foreign reserves had bottomed out and the country was now defaulting on its foreign loans. Prior to the war, Germany successfully looted assets from annexed Austria, occupied Czechoslovakia and the Nazi-governed city of Danzig. It’s believed that this plundering enriched Nazi gold sources by some $71 million by 1939. The Reichsbank, founded in 1876, hid the largesse in 1939 by understating its official reserves by $40 million as related to the Bank of England’s estimates.

But when WWII began in earnest, the Nazis launched into high-gear, expropriating at least $550 million in gold from foreign governments. This included $223 million from Belgium and $193 million from the Netherlands. These figures don’t include gold or other items stolen from private citizens and companies. With such rapacious greed, it’s no wonder that Hitler had his eye on King Alaric’s legendary gold.

So he sent Heinrich Himmler, chief of the SS and several Nazi archaeologists to the fabled site to try to find the gold. In 1940, Spanish dictator Francisco Franco presented Himmler with priceless artifacts including bronze and gold ornaments and human bones. All of which belonged to the Visigoths. The items were spirited away to Germany, where it was hoped they would prove the now-infamous theory regarding the Aryan-race (which has fortunately been thoroughly debunked by science). A devotee of pseudo-science, Hitler had proposed the racist and anti-semitic theory that a Master Race could be created. This theory held that the so-called Master Race belonged at the top, with Jewish people placed on the bottom. Himmler, second only in command to Hitler, also promoted this theory, which fueled the Holocaust. He was the mastermind of the “Final Solution,” a cruel attempt to kill all European Jews. Ultimately six million Jews died in this horrific atrocity.

And Hitler also wished to establish an ethnic connection between Germany and Spain. Unfortunately, many of these priceless artifacts were lost to eternity after being distributed to a number of museums in Germany.

Hitler felt a connection with the Visigoths because they were a Germanic people and this is why he sent Himmler to southern Italy in the late 1930s. But the trip turned out to be ill-fated and Himmler was unsuccessful. Perhaps Hitler felt an affinity with Alaric 1 because the long-dead ruler successfully sacked the revered city twice. And remarkably, Alaric and his fellow Visigoths left much of Rome, and its culture, intact.

The sacking of Rome and the death of Alaric 1

For centuries, Rome was a relatively safe place for citizens who lived within its walls. A huge empire with a rapacious military headed by capable leaders kept the barbarians at bay. But the stability didn’t last forever and the situation really worsened for Rome when the emperor Diocletian split it into two empires. Over time the power base shifted to Constantinople and to the emperor residing there at the time.

But the so-called barbarians were becoming frustrated with Rome, which continued to enslave them. And those frustrations loomed larger for the Goths after a treaty signed in 382 A.D. by the Goths and the Romans. The treaty allowed them to settle in the Balkans, but only as allies, not citizens. It also mandated that they serve in the Roman army. This was an alarming concern for many Goths who realized they would be expected to serve as “sacrificial lambs” at the front of the Roman army. Tragically, in many of Rome’s battles, especially at the battle of the River Frigidus in 394 A.D., this proved to be true.

So it’s understandable that Alaric 1, born in 370 A.D. wasn’t a huge fan of the Roman empire. He was still in his 20s when he led a series of impressive victories in 395 A.D. This included the sacking cities of Athens, Corinth, and Sparta. by 401 A.D. Alaric and his forces invaded Italy. Then came the invasion of Rome, where tens of thousands of Gothic slaves were liberated. His forces ransacked the city of three days, plundering the homes of the wealthy, destroying pagan temples and burning buildings. But for all of that, Alaric’s huge army still left much of the city intact and many of its inhabitants unharmed.

After such a massive victory, the Visigoth king looked to northern Africa. And he had a good reason for this: northern Africa was a major source of grain for the Roman Empire. But as he reached Consentia, he fell ill.

Even though he was completely healthy. And he died. Just like that.

Researchers, thumbing through historical, medical, and epidemiological sources may have hit on the cause of his death. It seems there’s a good chance that this mighty warrior was felled by a tiny mosquito carrying the parasite that causes malaria. Alaric was young and healthy, so the chances that he suffered a heart attack, stroke, or an aneurysm aren’t likely. And none of the historians from this time period mention it.

For the most part, all we really know about this man comes from the writings gleaned from Jordanes, who wrote of Alaric’s death:

“Subito immatura morte praeventus rebus humanus excessit … dum secum, quid ageret, deliberaret,” which translates to “suddenly, dying of an untimely death, he left human cares, while he was pondering on what he should do next.”

When you read this, it’s clear that Alaric’s sudden death came as a shock to many. Contemporary historians now believe that the 40-year-old king contracted a severe form of malaria caused by the parasite Plasmodium falciparum (endemic to central and southern Italy), which is carried by a species of Anopheles mosquito. Other infectious diseases, such as typhoid fever, gastroenteritis, or even influenza could have killed Alaric, but there’s no mention by ancient historians of these diseases ravaging his army. And researchers Francesco Galassi and colleagues detailed their reasons for linking his death to the disease in an issue of The European Journal of Internal Medicine.

Since Alaric and his troops had never visited the places where this disease is endemic â€” central and southern Italy, their risk of contracting this deadly disease was indeed very high, Galassi notes. sBut one of the only ways to confirm this is to solve the mystery of the location of Alaric’s grave. Something that the even the Nazis, with their finely tuned abilities to sniff out gold, couldn’t do. In death, this Visigoth king is conquering our imagination.

Where do we get our stuff? Here are our sources:

Forbes; Warlord Who Caused The Fall Of Rome Was Killed By Malaria, New Research Shows, by Kristina Killgrove

WeVillas: Cosenza, The Italian City With 25 Tons Of Ancient Artifacts

The Telegraph: Italy To Dig For Ancient Roman Treasure Sought By Nazis, by Nick Squires

The Telegraph: The Rabbi, The Lost Ark And The Future Of Temple Mount

People, UCalgary. Ca: Jordanes: The Origin And Deeds Of The Goths, translated by Charles C. Mierow

Wikipedia: The History Of The Decline And Fall Of The Roman Empire

The Local: Italian Town Promotes Itself With Nazi Photo

European Journal Of Internal Medicine: The Sudden Death Of Alaric 1 (c. 370-410 A.D.), The Vanquisher Of Rome: A Tale Of Malaria And Lacking Immunity