Today In History: 1929 Roared With A Saint Valentine's Day Massacre 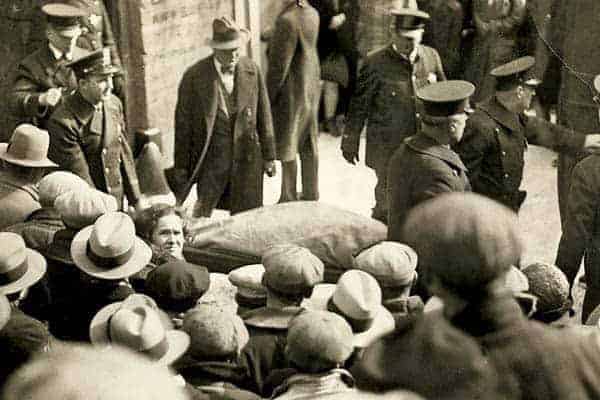 Today In History: 1929 Roared With A Saint Valentine’s Day Massacre

February 14, 1929. It was the last year of the roaring 1920s and it ended with a bang when a gang war fully erupted between the Irish and Italian mafias in Chicago. Prohibition made alcohol a lucrative commodity on the black market. Major shipments made their way to Chicago via Detroit, where it came in from Canada or the eastern U.S. after passing through channels that most often included the Detroit River. Generally, liquor making its way to Chicago ended up in the South Side which was under the control of Al Capone, the notorious Italian mafia boss. When Capone’s shipments out of Detroit were getting smaller, rumors began spreading throughout Chicago that the North Side Moran gang were hijacking it.

The bootleg business made a lot of money. All gangs in Chicago were vying for a piece of the action. The Moran gang was not an exception. Their first mistake might have been when they tried to murder two members of the Sicilian Union, who were local Mafia closely aligned with Capone. The attempt was unsuccessful. Organized crime gangs throughout Chicago knew that the Moran gang were on the rampage. They, like all the gangs at that time, wanted as much control over the city and bootlegging as possible.

By the time the Moran gang began inching in on Capone’s dog racing and saloon businesses, Capone began working out a plan that would not only punish the Moran gang, but eliminate them and its leader, “Bugs” Moran. Without anyone in his way, Capone could extend his control over Chicago to include the North Side and focus on expanding his various enterprises. He solicited assistance from a variety of former gang members from throughout Chicago.

Together, they formulated a plan that would lure Bugs Moran and two or three of his lieutenants into a local warehouse. Warehouses were used all the time in mafia operations for the trading and selling stolen goods. They were preferable for a number of reasons. Namely, they were located outside residential areas and structurally were contained environments that assured privacy and were easy to control; no one could come and go without being notice. They also lacked suspicion, a loaded truck leaving a warehouse would not seem uncommon to an outsider.

On Valentine’s Day 1929, the Moran gang were told to meet Detroit’s Purple gang for a shipment of whiskey. Mid-morning, nearly all the Moran gang were at the warehouse. “Bugs” Moran was running late. By the time he arrived, he saw a police car and fled. Meanwhile, a lookout working for Capone thought he saw Moran. He signaled to Capone’s men, who were disguised at policemen. They entered the warehouse, shot everyone but two of their associates, with whom they emerged from the warehouse. To anyone who saw or heard anything, it appeared a calm, collected, routine arrest.

A total of seven men of Moran’s men were executed. When the citizens of Chicago heard about the Saint Valentine’s Day Massacre, there was outrage. Suddenly, Capone had a bigger problem than Moran on his hands. The police launched an investigation. The grim details of the massacre and the day on which it took place lingered, but any criminal charges and investigation did not. The police searched and found leads and even a suspect or two, but for the most part every time something began to take shape, the details crumbled. The warehouse where the massacre took place underwent demolition but the memory of the incident has never left Chicago.