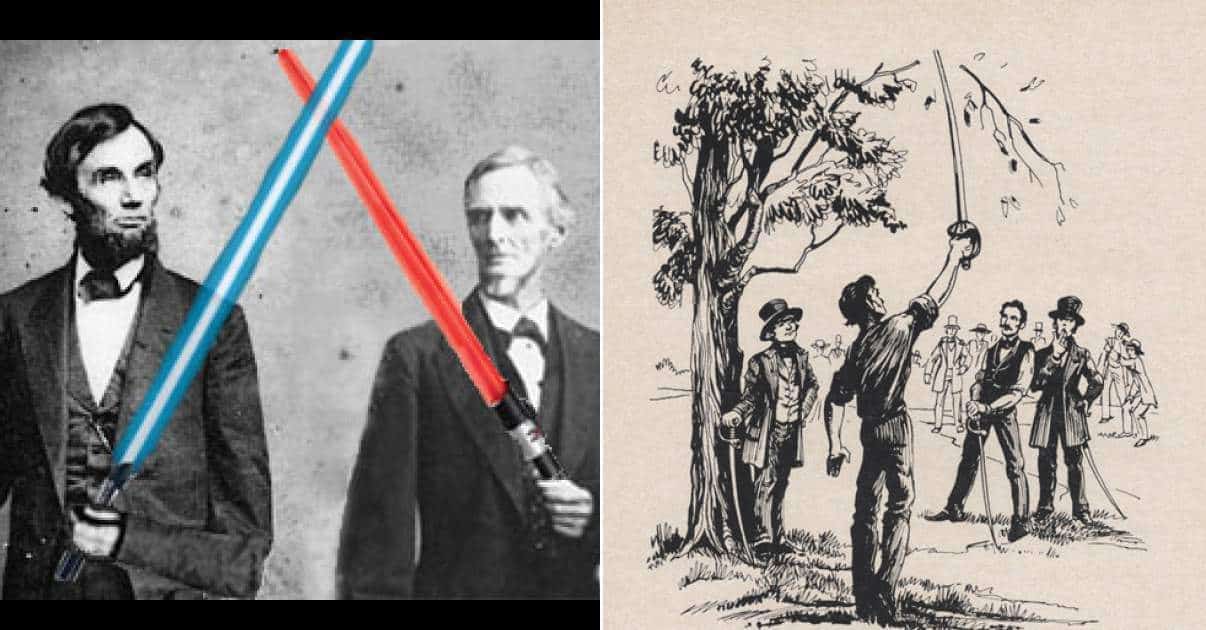 Honest Abe’s Precarious Past: The Duel that Almost Undid the 16th President of the United States

In 1842, Abraham Lincoln turned James Shield’s life upside down. But how could one of America’s favorite presidents become such a negative pivot for somebody’s life? It all began in 1837. Shield’s life so far could be defined by the Panic of 1837, a financial crisis in the United States that created a major recession lasting nearly 10 years. In the uncertain American climate, profits, prices, and wages went down – while unemployment steadily increased. As an auditor, it was Shield’s job to correct the state finances after this tumultuous financial disaster. During the time, Shield sided with the view that the Illinois State Bank should be closed. This meant that the only acceptable currency would be gold and silver- and the typical Illinois resident did not have gold weighing down their pockets.

This was the political environment in which Abraham Lincoln found himself when he unsuccessfully sought election to Illinois State Legislature in 1832 – among many other controversies. He had first been elected to the State Legislature in 1834 and had been reelected in 1836, hurling him into the economic chaos created by the current administration. He decided to act – so he took to paper.

The letter Lincoln wrote was directed to none other than James Shield. Lincoln, who was no stranger to financial struggle, appealed to the side of the impoverished citizens. In the letter, Lincoln wrote scathingly:

“I’ve been tugging ever since harvest getting out wheat and hauling it to the river, to raise State Bank paper enough to pay my tax this year, and a little school debt I owe; and now just as I’ve got it…, lo and behold, I find a set of fellows calling themselves officers of State, have forbidden to receive State paper at all; and so here it is, dead on my hands.” 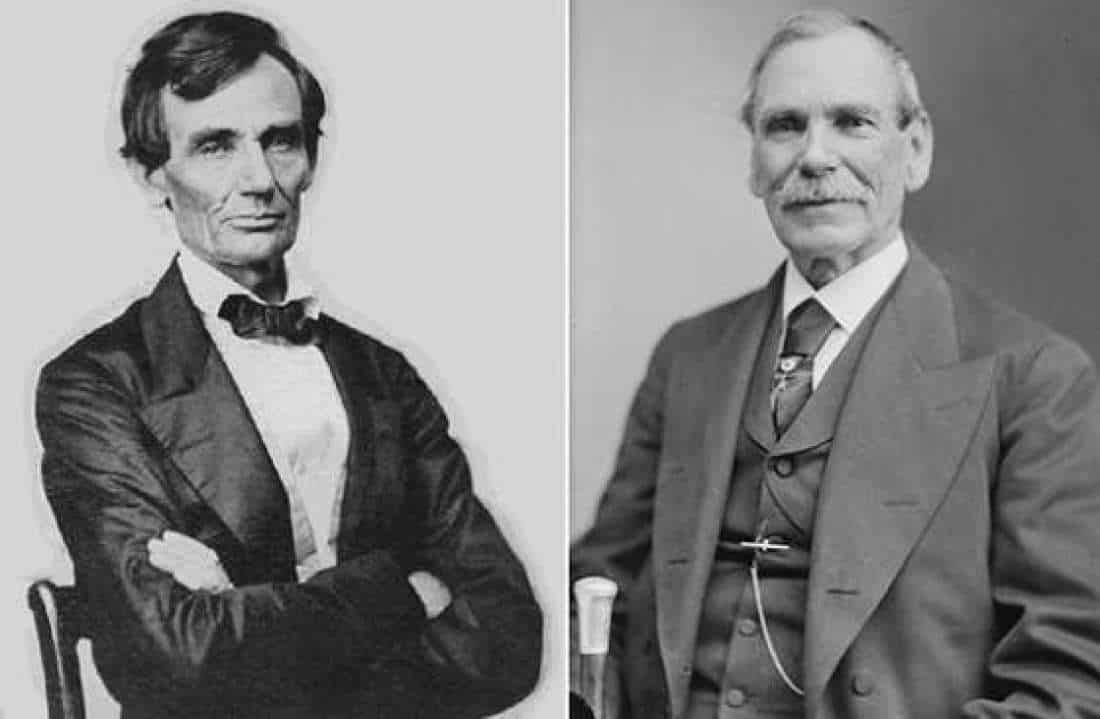 Not as many people might know who James Shield is. Besides what has already been mentioned, Shields was a politician. He was born in 1806, which is three years before Abraham Lincoln. As a politician, Shields was a Democrat and served as a United States Army Officer and a United States Senator who served three different states. In fact, Shields is the only politician to serve in three different states throughout his political career. These states were Minnesota, Illinois, and Missouri.

The relationship between James Shields and Abraham Lincoln was one which changed over time. Lincoln worked with Shields in order to help the enormous debt problem in Illinois because of the Panic of 1837. During this time, Lincoln and Shields had a great friendship. But once Shields became the State Auditor, the relationship cooled. Lincoln started to disagree with a lot of decisions Shields was making. One of these decisions was closing the Illinois State Bank. Therefore, Lincoln did the only thing he could think of, he attacked Shields through a letter written to the editor. Many people felt Shields was arrogant and eccentric. For Lincoln, this made Shields an easy target.

Shields was very fond of the ladies, which Lincoln included in the first letter. In taunting Shields, Lincoln wrote, ”Dear girls, it is distressing, but I cannot marry you all. Too well I know how much you suffer; but do, do remember, it is not my fault that I am so handsome and so interesting.” Lincoln then shared the letter with his future wife, Mary Todd, and her friend. The two ladies found the letter delightful and decided to add some of their own thoughts to the letter. After the first letter, Mary started to write her own letters, using the pen name “Cathleen” and sent them off to the Journal. Abraham Lincoln was not aware that Mary decided to send her own critique to the newspaper.

Shields did not appreciate the letters. He did not like being the laughingstock of the town. Now, Abraham Lincoln had a good relationship with Simeon Francis, the editor of the Journal, but this didn’t help when Shields walked into Francis’ office. Shields demanded to know Rebecca’s true identity. Francis obliged and gave Shields the name Abraham Lincoln. Upon receiving the information, Shields went to the courthouse to have a handwritten letter delivered to his old friend. The letter stated, “I have become the object of slander, vituperation and personal abuse. Only a full retraction may prevent consequences which no one will regret more than myself.” However, Abraham Lincoln did not take the letter seriously.

Lincoln did not send Shields the type of retraction he wanted. In fact, Lincoln did not really respond to James Shields at all. It is stated that Lincoln felt this was all a bit foolish. He also did not like the tone Shields was using in his letter. As to Lincoln, the letter he wrote was his opinion and most of it was just poking fun. After all, it was not Lincoln’s fault if Shields did not get the jokes. Therefore, Abraham Lincoln responded the only way he felt he could. Lincoln said he would respond to Shields when he received more of a gentleman-type letter from Shields.

Abraham Lincoln’s verbal response pushed James Shields over the edge. He could not believe that he would be treated so disrespectfully. Especially by a person who used to be his friend. Furthermore, why should Shields send Lincoln more of a gentlemanly response when, as Shields believed, Lincoln was the one who wrote all the letters to the editor and none of them were very gentlemen-like? Of course, by this point, Mary was not going to admit to writing any of the letters. Furthermore, to Lincoln, this was all a waste of time.

But for James Shields, it was anything but a waste of time. James Shields did not understand any of the jokes thrown at him in the Journal. Furthermore, like most people, he did not like being taunted in the town’s newspaper. Therefore, James Shields made a last-ditch effort to get an apology or response from Lincoln, he challenged Abraham Lincoln to a duel.

A Duel is On

Once Abraham Lincoln learned about the duel, he really felt the whole situation had gone too far. Abraham Lincoln was not much of a fighter and a duel was pretty much a live-or-die battle. However, Lincoln also knew that not accepting a duel was dishonorable. Therefore, he accepted the duel against James Shields. Because Lincoln was the one who was being challenged, Lincoln was able to select the conditions of the duel. And, of course, Abraham Lincoln was humorous and push a person’s buttons kind of person, he had fun with it. Lincoln came up with the most ridiculous set of conditions he could think of.

Because dueling was illegal in Illinois, one of Lincoln’s conditions was that they had to meet on an island across the Mississippi. Lincoln further stated that they had to meet at the bottom of a 12-foot deep pit with a piece of wood between them which neither one could cross. For the weapon, Lincoln picked the cavalry broadsword, which is a sword characterized by a basket-shaped guard that protects the hand. Lincoln later explained in his life that he did not want to die, which he believed Shields would have done if another weapon was used. Therefore, he picked the weapon that, because of his height, would give him the upper hand. Lincoln believed that with his height and the cavalry broadsword, the much shorter Shields would end the duel out of fear. However, Lincoln’s belief did not prove to be true.

The day of the duel, September 22, 1842, came and the opponents met at Bloody Island, Missouri. To several witnesses, Lincoln did not look like he normally did. One witness said, “I’d never seen him (Lincoln) look so long before making a joke, and began to believe he was getting frightened.” Lincoln, in an attempt to show Shields that this could be a fatal event to him, clipped off a piece of branch with his sword. Lincoln assumed this would make Shields turn around and run. However, this did not deter Shields and the duel was still on. The duel was about to begin when Colonel John Jay Hardin, a mutual friend of Lincoln and Shields, stepped in and helped the two men work it out verbally. Lincoln admitted to writing the letters in the Journal and apologized. The duel was then over.

But still, the jokes did not end there. When the boat came back to Illinois, many people were shocked to see what they assumed was a body lying on the floor of the boat. They wondered who the person in the red shirt was. However as the boat came closer to the crowd, they saw that this was just a board with a red shirt around it. Once the boat stopped, both James Shields and Abraham Lincoln stepped off to a pleased crowd. The two remained friends for the rest of their lives.