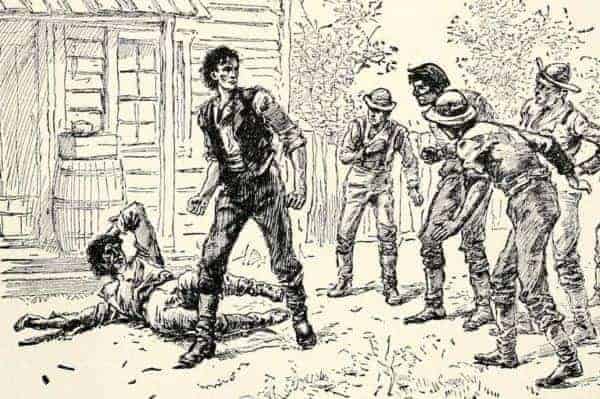 Name the ten most well-known leaders in the history of the United States and almost everyone will name Abraham Lincoln as one of those presidents. He is just one of those historical figures that almost everyone knows the name and image of. His accomplishments before and during his presidency are well-known, as is his tragic death at the hands of John Wilkes Booth.

What isn’t so well-known is that he had a career as a professional wrestler as a young man. It isn’t something you really think about when it comes to presidents, but often they do have actual lives outside of politics before they start running for office. Ronald Reagan was an actor, Donald Trump a real estate tycoon, James Garfield was a school teacher, Grover Cleveland was a sheriff, Herbert Hoover was an engineer, and Abraham Lincoln was a star wrestler.

Now in those days, wrestling wasn’t what it is today. So if you’re imagining Abraham Lincoln tackling someone else while hitting them with a chair, that isn’t what this was. According to historical sources, the wrestling of those days was more like grappling. Two men would enter the ring, lock arms and try to throw the other to the ground.

What is interesting is that Abraham Lincoln was really, really good at wrestling, earning around 300 wins and just one loss. He was so impressive that in 1992, almost 130 years after his assassination, the National Wrestling Hall of Fame added him to their Outstanding American wing. Surprisingly, he isn’t the only United States president that has been graced with that honor. George Washington, William Howard Taft, and Teddy Roosevelt are also located in that particular section of the Hall of Fame.

During his wrestling career, Lincoln was renowned for his strength in the ring. At the age of 21, he won the title of county wrestling champion.

There are two of Lincoln’s matches that are important to note. The first was a match against Jack Armstrong, who was the leader of a rugged gang called “Clary’s Grove Boys.” The Boys, as they were known in New Salem, Illinois, were a small group of young men who arrived in the county to (according to historian Benjamin Thomas) “drink, gossip, trade and play. Physical strength and courage were their ideals.” Armstrong heard about Lincoln’s prowess in the wrestling ring, and decided that he needed present a challenge to the future president.

Lincoln won. After the match Armstrong and Lincoln became friends, and because the Clary’s Grove Boys were so dominant in the county, Lincoln faced fewer arrogant challenges. Because it was against the former county wrestling champion, it was celebrated as his most impressive win ever.

Another match of note is the one that Lincoln lost. While Lincoln was serving with the Illinois Volunteers during the 1832 Black Hawk War, he was challenged by Hank Thompson during a friendly tournament between members of his regiment. Thompson won, though there are no details on how he won or what the aftermath of the fight was.

Abraham Lincoln wrestled for 12 years before moving on. After that he was more focused on his military career and politics. He started his political career a the age of 23 (while still wrestling on the side) when he ran for the Illinois General Assembly. Once elected, he resigned his commission in the militia, and focused solely on politics.

Even at that age, it is said that he could draw crowds from all over, as his prose and charm wooed crowds. He gained popularity while storytelling in New Salem, and was able to translate that into later political support. Despite his popularity, he lost that first election, coming in eighth place. Due to his popularity in the wrestling ring, his friendship with the Boys, and his general persona, he took all but 3 of the 300 votes in the New Salem precinct.

During his wrestling career, he was known to talk trash to his opponents and the crowed, one time stating, “I’m the big buck of this lick. If any of you want to try it, come on and whet your horns.”

Abraham Lincoln may be one of our most important and well-known politicians, but his beginnings were much different from most would expect. It is a good reminder that while people look up to the leaders of our countries, they are still human, and many of them did interesting things that had very little to do with running for public office.