WWI Inventions: Forged in Fire - 5 Invention During World War One 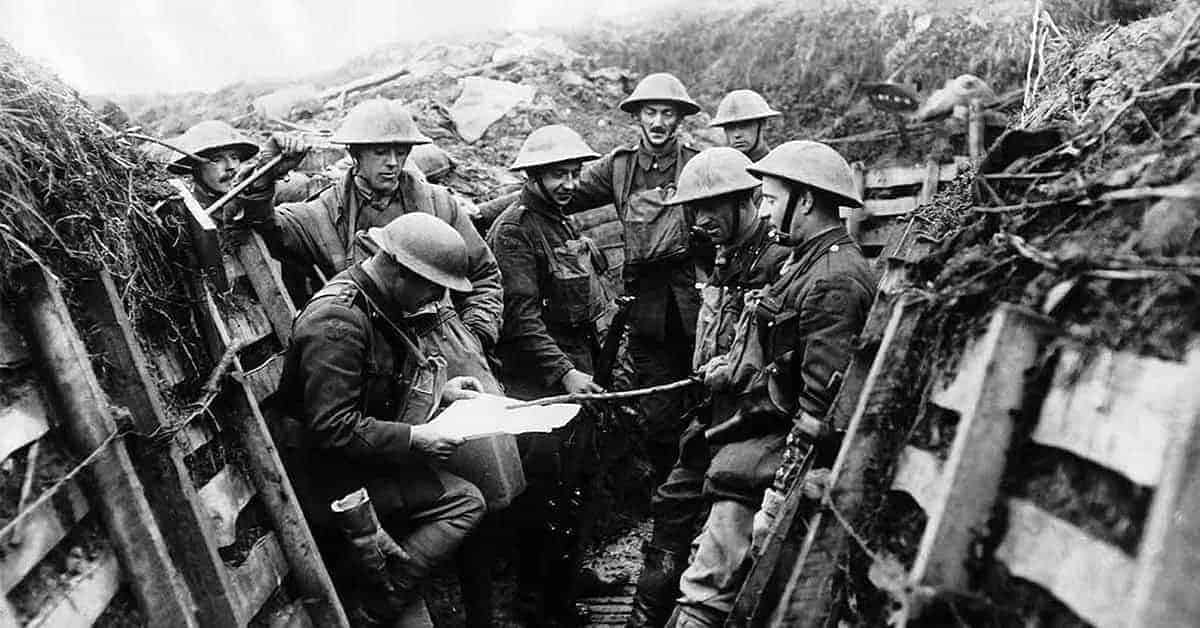 Forged in Fire: 5 Inventions from World War One

Drones might seem to be at the very forefront of military technology, but their roots go back far further than one might imagine. The state-of-the-art unmanned aerial vehicles (UAVs) used by the US Army today bear little resemblance to those used in the First World War, but the basic concept remains the same – a method of attacking the enemy from the sky without risking one’s own men. The modern definition of a UAV requires it to be able to return to base afterward, a limitation that the prototypes that were produced in the 1910s would certainly fall short of, but they were certainly a step further than the traditional missiles or torpedoes that were also in use at the time.

They flew under their own propulsion, sustained their own flight and offered a more penetrating range of attack than had ever been seen before – all characteristics that also mark out the current models of attack drones. The First World War drone was capable of traveling a massive 75 miles, a range well beyond the capacity of any artillery available elsewhere, and perfect for the circumstances of the Western Front, where the military top brass would be situated well behind the lines and in presumed safety. In practice, none were ever used in battle, but the idea would live on far longer than the prototype.

The key technological advance that made the drone possible was hardly a secret. Orville and Wilbur Wright, better known as the Wright brothers, had pioneered the idea of human flight back in 1903 in Kitty Hawk, North Carolina, where they successfully managed a short flight in their self-devised and self-built craft, the Wright Flyer. The intervening decade had seen a proliferation of potential aviators and a speed of technological advancement that few could have dreamed possible.

The battlefields of the First World War were the first to see aerial warfare and the new heroes of the public back home were the fighter aces, with their exploits in the clouds broadcast widely. As one might expect from such a new technology, none of the generals really knew what they were doing and the casualty rate for those engaged in aerial combat was very high, so the idea of an unmanned bomber aircraft was very appealing.

The advance that allowed the drone to come into existence was not so much technological as it was cerebral. The basic mechanism was already there, but a few small tweaks modified it for a totally different purpose. Orville Wright was involved in the project – his brother had passed away before the war began – but the genius of the idea came from Charles Kettering, an inventor and airplane engineer from Ohio. He adapted the design that was used by airplanes with the key modification of removing the pilot. He built a fuselage from papier mache and wood and a propellor system, released from an existing airplane on a track and fired at the enemy.

A gyroscope maintained orientation and the propellor allowed the drone to fly itself for far longer than any ground or air missile could travel, with the payload released when an allotted number of engine revolutions had been achieved. This meant that, when atmospheric conditions and velocity had been factored in, the drone could bomb a target fairly accurately at no risk to the firing force.

The Kettering Bug, as it became known, was never to see action in the First World War but it represents the first attempt at unmanned aerial combat. The drones that the US Army and other militaries use today are its direct descendants, and they can draw their origins back to the very birth of flight.

Orville Wright is one of the most celebrated names in 20th-century science – as is Fritz Haber – but they were not the only geniuses who were called into action in the First World War. Marie Curie, one of the finest minds of her generation and the first double Nobel Prize laureate – not to mention the first woman – was already feted around the world when war broke out in 1914 and she would put her considerable intellect into the service of her adopted country, France.

Though Polish by birth, she had been living in Paris since the early 1890s and said in a letter to her lover and fellow scientist Paul Langevin: “I am resolved to put all my strength at the service of my adopted country since I cannot do anything for my unfortunate native country just now…”. As one of the world’s foremost experts in radiation (she invented the term “radioactivity) Curie was able to put her knowledge in that field to use as soon as the war began.

When the war began and the government in Paris departed en masse to Bordeaux, she was forced to follow them with France’s entire supply of radium, which was to be moved for safekeeping. Undeterred, she returned to the capital and set to work aiding the wounded soldiers that flooded into the city from the frontlines to the north. Using her knowledge of radiation, she convinced local mechanics to outfit trucks that could carry mobile x-ray machines.

The x-ray was not new, having been first used for medical procedures in 1900, but the practical application of the technology on a mass scale was unprecedented. It was blindly obvious that the ability to isolate and remove shrapnel, bullet and other objects from wounded men, not to mention resetting broken bones, was vital to saving lives and getting as many soldiers back into the field as quickly as possible.

Curie herself, though an accomplished scientist and theoretician of x-rays, was untrained in their medical use. She took it upon herself to learn how the machines were properly operated and even how to drive and service the trucks that carried them, so she could best make herself useful. She kept her daughter Irene, then just a teenager, close at hand as her assistant. The mobile x-ray machines were known to French soldiers as “little Curies”, bringing as they did the technology of the famed scientific family to the frontlines.

Marie Curie was named the director of the French Red Cross Radiology Service and was able to draw upon a huge contact book of wealthy individuals in order to gain financial and material assistance for her x-ray programs. She funded generators that could keep the trucks powered and developed a team of doctors that could use the technology and then operate using the results that they acquired. By the end of the war, there were 20 mobile radiology units in operation as well as hundreds of members of staff, a large number of them women like their leader.

Curie described the vehicles herself in her autobiography: “It was simply a touring motor-car, arranged for the transport of a complete radiologic apparatus, together with a dynamo that was worked by the engine of the car, and furnished the electric current necessary for the production of the rays. This car could come at the call of any of the hospitals, large or small, in the surroundings of Paris. Cases of urgent need were frequent, for these hospitals had to take care of the wounded who could not be transported to more distant places.”

Previously, radiology had been something that required extensive hospital treatment and the fortune of having such a technology nearby. Marie Curie managed to take the existing capabilities of science and apply them to the circumstances that befell France in the First World War, creating the mobile x-ray facilities that are commonplace today.