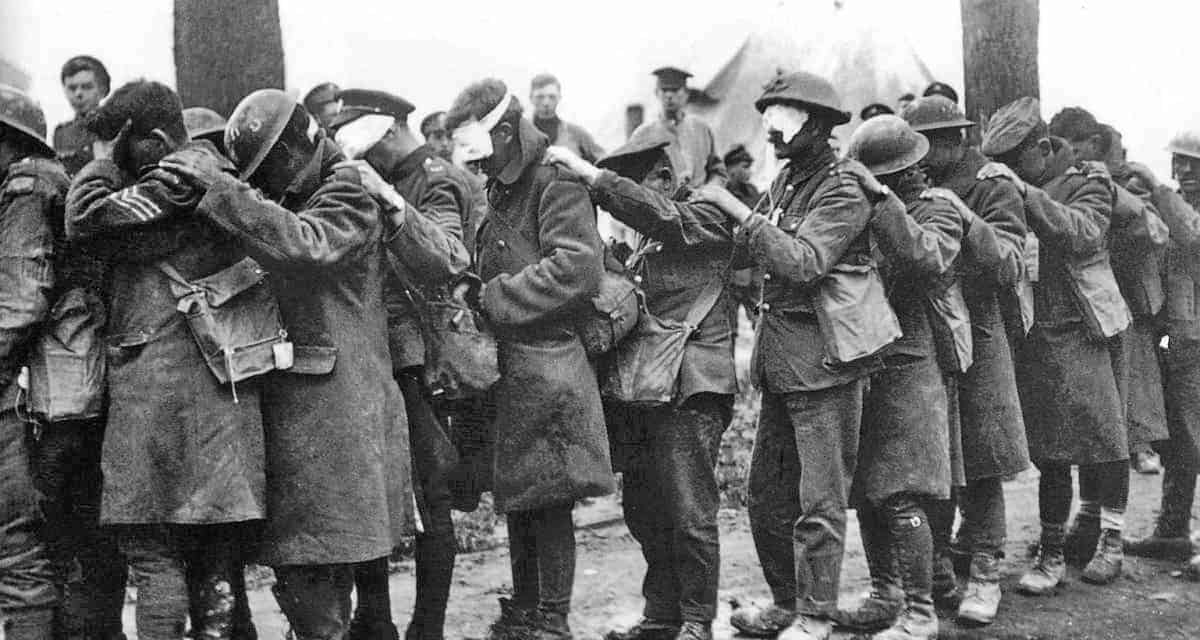 Fritz Haber’s life started brilliantly, then took a dark turn, before plunging into the horrific. On the plus side, his contributions to science were so great, that our modern world would be impossible without them. Haber’s breakthrough discoveries play a vital role in enabling the everyday lives of billions around the world. On the downside, Haber did not dedicate his brilliant mind solely to the good of humanity. He also deployed his considerable talents to invent some of warfare’s scariest instruments. Thanks to him, human conflict, which had already been horrible long before Haber, took a nasty turn for the infinitely worse. Then, as if in a Greek tragedy, Haber’s life ended with an about turn from celebrated savior to shunned pariah, and his innovations came back to claim his flesh and blood.

Fritz Haber was born in Prussia in 1868, into a well off Jewish family. In the rapidly liberalizing Germany of his days, his was the first generation of Jews to lead their lives without the legal discrimination that had blighted the lives of Haber’s ancestors for centuries. Haber embraced that inclusiveness, and took great pride in being a German. As he put it: “[Jews] want only one limit, the limit of our own ability“. As it turned out, Haber’s abilities were extraordinary.

In the 1840s, German chemist Justus von Liebig had revolutionized agriculture by demonstrating the importance of nitrogen as a plant nutrient. As a result, the demand for potassium nitrate, or nitre, and ammonia, grew steadily throughout the 19th century, for use in fertilizers and industrial feedstock. Nitre had initially been used in medicines and early chemistry, but the demand exploded with the discovery of gunpowder, as nitrated salts known as saltpetre were a key ingredient. Then von Liebig came along, and caused the already high demand to skyrocket.

Throughout human history, mankind had extracted nitre from manure, seaweed, and increasingly in the 19th century, guano: bird and bat shit, that piled up into gargantuan mounds in some parts of the world. Indeed, so important did guano become, that The War of the Pacific (1879 – 1883) was fought between Peru and Chile to decide the ownership of guano deposits along their border. Chile, won, seized the nitrate producing regions, and its national grew by 900% as a result.

However, by the early 20th century, it was widely predicted that the known sources of nitrate could not satisfy future demand, and that when the deposits of guano were eventually depleted, catastrophe would ensue. It was believed that the human population would max out at 1.5 billion, before mass starvation set in. Ironically, the famine was expected to result from a shortage of nitrogen, even though 80% of earth’s atmosphere is made of nitrogen. Unfortunately, nobody knew how to extract it efficiently. Then Fritz Haber came up with the Haber process, to extract nitrogen from the air in industrial quantities.

By forcing air into giant tanks, and subjecting it to extreme heat and pressure while adding hydrogen, nitrogen atoms would pry apart, each bonding with three hydrogen atoms to form ammonia. Haber had literally pulled fertilizer out of the air. In 1909, he announced his breakthrough, and revolutionized agriculture. Today, 100 million tons of fertilizer are produced each year using the Haber process, and the planet’s current population of 7 billion plus would be impossible without it. For most humans today, half the nitrogen in our bodies is there thanks to Haber, who won the Nobel Prize in 1918 for his discovery.

Haber had a passion for chemistry, and by 1890, he was teaching it as a professor. That same year, he met and fell in love with Clara Immerwahr, a wealthy Jewish girl with a passion for learning and a brilliant mind to match Haber’s own. Although she liked Haber, Immerwahr liked her independence even more, and so turned him down when he asked to marry her. A decade later, she had become the first woman awarded a chemistry doctorate from a German university, and when Haber pursued her again, she relented. The duo were married, and by 1902 they had a son. Immerwahr managed to juggle science and domestic life, and helped her husband with his research.

The Haber process made Fritz famous, and in 1911 the family moved to Berlin, when he became chemistry professor at its university. There, Haber socialized and rubbed shoulder’s with Germany’s greats, including generals, ministers, and the Kaiser himself. As his fame and ego grew, Haber’s marriage began to fray. He left his wife and son for long stretches, and took to philandering with the many women who threw themselves at him.

When WWI erupted in 1914, Haber saw it as his patriotic duty to help Germany in any way he could. By the end of 1914, the Western Front had stalemated into a line of opposing trenches, stretching for hundreds of miles from the Swiss border to the sea in Belgium. Haber contacted the authorities, advocating the use of deadly chemicals to break the stalemate. He was made an army captain, and assigned to head the Ministry of War’s Chemistry Section. There, he oversaw the development of poison gas, pioneering its use and earning the moniker “the Father of Chemical Warfare”.

During the Second Battle of Ypres in 1915, Haber oversaw the deployment of about 170 tons of chlorine gas opposite trenches occupied by French colonial troops from Morocco and Algeria. At about 5PM on April 22nd, 1915, Haber personally gave the signal Gott strafe England! (“God punish England!”), to open the valves on canisters containing the deadly chemicals. Once released, the chlorine reacted with water in the air to form hypochlorus acid, which destroys moist tissue such as that of the lungs and eyes.

In a fifteen foot high and four mile wide wave of greenish yellow mist that took on a pinkish hue with the setting sun, Haber’s invention slowly drifted towards the unwitting occupants of the French trenches. A man walking at a brisk pace could have outrun it, but nobody ran, because nobody had seen such a phenomenon before, or understood what it augured. Leaves shriveled as they were touched by the deadly mist, birds toppled from branches or fell mid-flight, and rats in the no-man’s-land between the trenches began twitching in their death throes. When the mist hit the defenders, terrified chaos ensued.

As the first poison gas attack struck, soldiers were brought to their knees by agony. Phlegm and pus filled their lungs, yellow mucus came burbling out of their mouths, followed by blood as they coughed up chunks of their lungs, while tearing at their throats in a desperate bid to draw in some air. Seeing what befell those touched by the deadly cloud, soldiers fled by the thousands, leaving a four mile gap in the front. It was not exploited by the Germans, who had made no provision for exploiting the deadly gas with a follow up attack. When the French eventually returned after the chlorine had dissipated, they found over 5000 corpses.

In the meantime, Clara Immerwahr, a pacifist, had grown increasingly disgusted with her husband’s endeavors. She saw it as an immoral perversion of science, but Haber turned a deaf ear to her remonstrances, and accused her of treason. As he put it: “During peacetime, a scientist belongs to the world, but during wartime, he belongs to his country“. After overseeing the first poison gas attack, Haber returned home from the front, and on May 1st, 1915, threw a party to celebrate his success. That night, while Haber slept, Clara took his revolver, went to the garden, and shot herself in the chest. She was discovered by her 13 year old son, as she bled to death. The very next day, Haber returned to the front lines, to resume his oversight of Germany’s chemical warfare program. By war’s end, over 100,000 had been killed by chemical warfare, and a million had been injured.

After the war, Haber’s reputation took a hit, when the full extent of his pioneering role in deploying poison gas became known. When the Nazis seized power in 1933, Haber quickly went from German national treasure to despised Jew. He left his beloved homeland to take up a professorship at Cambridge University in England, but was shunned by the British, who viewed him as a despicable war criminal. He soon left England, to roam Europe as a Pariah, while his health worsened. He died alone in a Swiss hotel, in 1934, having repented late in life of his role in chemical warfare.

However, even death did not stop a seemingly vindictive fate from piling more horrors to further mar Haber’s legacy. After he fled Germany, the Nazis wasted little time in seizing Haber’s laboratory and research records: he had many valuable innovations and inventions, which the Third Reich sought to “Aryanize”. One such invention was a Hydrogen cyanide pesticide named Zyklon. Readers who already know what Zyklon is probably just got a sinking feeling in their stomachs, anticipating where this is headed. In 1919, Haber’s wartime research into Hydrogen cyanide led to the foundation of a state consortium to investigate further military use of the compound.

It led to a commercial formula known as Zyklon A – a nerve agent for killing bugs. The Nazis tinkered with the formula, removing the noxious smell that warned humans not to inhale it. The result was Zyklon B, which became the gas of choice used during the Holocaust in gas chambers. Having deliberately pursued deadly chemicals with which to kill his fellow humans, Haber’s worst legacy turned out to be excessively cruel karma that he could never have foreseen. The victims of that particular Haber invention numbered in the millions, comprised mostly of fellow Jews, including Haber’s friends, and blood relatives such as his own nieces and grandnephews.

Chemical & Engineering News – Who Was the Father of Chemical Weapons?

Medium – The Tragedy of Fritz Haber: The Monster Who Fed The World