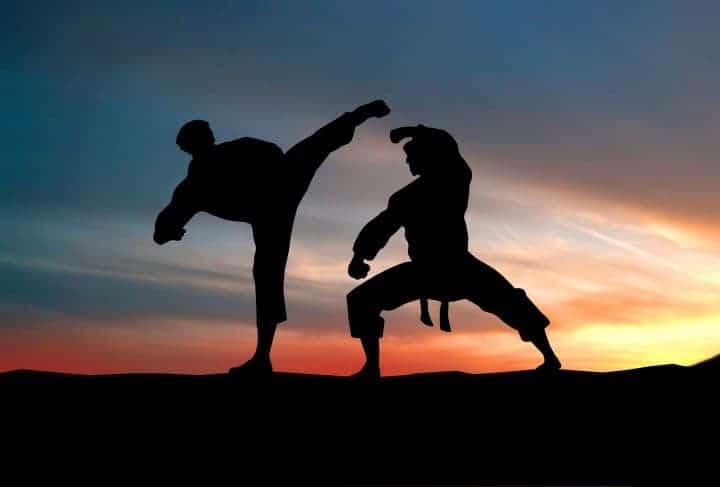 “Dinosaurs were huge and powerful; they could not adapt and they died out. And so the big difference between dinosaurs and cockroaches is adaptability: one is able to adjust, while the other, apparently, couldn’t… The same analogy applies to fighting, and probably any other sport. It’s not always the strong that survive. It takes brains, guts, tolerance and forward thinking. We’ve seen this since the beginning of mixed martial arts.” Georges St-Pierre, UFC legend.

Mixed Martial Arts is by far the youngest of all the fighting styles that feature in this list, but, as with so many others, it has antecedents that date back centuries. We have spoken at length about Pankration, which might be known as Ancient Greek MMA, and about the importance of Vale Tudo fighting in the growth of Brazilian Jiu-Jitsu in the early 20th century: both are major influences on modern mixed martial arts.

The name Mixed Martial Arts is newer still than the sport itself: it was first used to review the first ever Ultimate Fighting Championship, held in 1993 in the United States. Prior to that, there was no accepted term for what was happening, though there was plenty of it taking place, and no unified rules for what the martial art might be, let alone a canon of techniques. Mixed Martial Arts wasn’t so much as a mix of martial arts, but more of a coming together in which experts in various disciplines came to dispute which was the best.

At the inaugural UFC in 1993, there were fighters representing American Kenpo, a form of karate, Taekwondo, French Savate, Sumo wrestling, kickboxing, regular boxing, shootfighting and Brazilian jiu-jitsu. What was learned from this – and from the next four repeats of the UFC tournament – was that, under the rules that they fought, BJJ was by far the best style. Well, the BJJ as practiced by Royce Gracie, who won UFCs 1, 2 and 4, was the best.

What is noticeable, looking back on the early days of MMA, is that BJJ was the best suited to the almost total lack of rules. Whether this was because Gracie, as a BJJ practitioner, was the most accustomed to the rule set, in the sense that he had partaken in Vale Tudo fights along similar lines, is up for debate. His style, which essentially removed all stand-up fighting, was perfect for the task at hand and proved as much. As soon as the fight went to the ground, all other fighting styles were inadequate to beat someone with solid – or in Gracie’s case, spectacular – Brazilian jiu-jitsu skills.

As the UFC grew, and other promotions began to take on MMA, this was negated. The more styles that entered the cage and the more experience that fighters garnered, the more a hybrid style developed that was tailored to the needs of mixed martial arts. It was at this point that the martial art of mixed martial arts began to come into existence, as opposed to simply a mix of martial arts. New techniques adapted to the demands of the MMA cage grew and no fighter could expect to win solely on mastery of just one or two preexisting styles: a boxer would have to learn to fight on the floor and defend kicks, a judoka must learn to avoid getting struck and a Muay Thai fighter would have to learn to move around to avoid takedowns.

The UFC, the flagship of MMA, has grown into a multi-billion dollar industry, but beyond that, the sport has ballooned. There are amateur competitions, countless gyms and a culture that has developed around the sport that has seen it progress to a level that none could ever have expected.