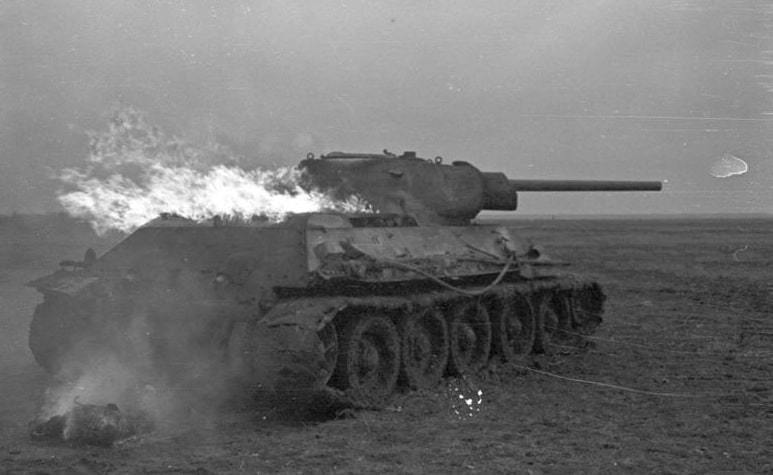 This Day In History: The Soviet Army enters Romania (1944)

On this day in history in 1944. Stalin’s army secured passes in the Carpathian mountain and this allows them to enter Romania. This was to ultimately see the Romanian government under King Michael surrender to the Soviets and end their alliance with Germany.

Romania had a fascist government in 1937. It had begun to persecute the country’s Jews and other minorities and was increasingly pro-German. It modeled its policies on those of Germany and Italy. Romania’s king, Carol II, dissolved the government a year later, but the fascists known as the Iron Guard, remained powerful and a threat. In June 1940, the Soviet Union seized two Romanian provinces (modern Moldova). The king searched for an ally to help protect it and to appease the powerful Iron Guard who threatened the king and his government. In 1940 Bucharest allied itself with Hitler’s Germany. Later in 1941, it joined the Germans, in Operation Barbarossa, which is the invasion of the Soviet Union. Several Romanian armies fought in the Soviet Union.

King Carol was forced to abdicate in 1940 at the insistence of the far-right. Prime Minister Ion Antonescu and the Iron Guard fascists dominated the country and they ruled with an iron grip. Romania recaptured the territory lost to the Soviet Union in 1940. However, the Germans exploited Romania economically, especially its oil fields and this impoverished the country. However, after Stalingrad, many Romanians believed that they had allied their country with the wrong side. Many Romanians had died in southern Russia fighting for the Nazis. They knew that Stalin would not forgive that and they feared what would happen if the Red Army invaded Romania. On this day in 1944, the Soviets were on the verge of entering Romanian territory and it looked as if they would soon seize Bucharest. They had seized a strategic pass and had reached Jassy and Romania lay before the might of the Soviet Union.

King Michael, son of the late King Carol, emerged and removed the fascists from power. The young king implored all patriotic Romanians, to fight with, not against, the invading Red King. The king signed an armistice with the Allies and declared war against their old ally Germany in 1944. The Soviets occupied the rest of the country ‘as allies’. They and not the Romanian government was in control of the country.

The Romanians had been right to fear Stalin and his intentions towards their homeland. The Soviets wanted to create a new Communist order in Eastern Europe. Stalin wanted to turn Romania into a communist state allied to Moscow.

King Michael would, ironically, be forced to abdicate by the Soviets. They supported the local communists and eventually, they seized control of the government. maintain a puppet communist government in Romania until the end of the Cold War. Romania freed itself from the brutal regime of Nicolai Ceaseceau in 1989 after a revolution that left thousands dead.