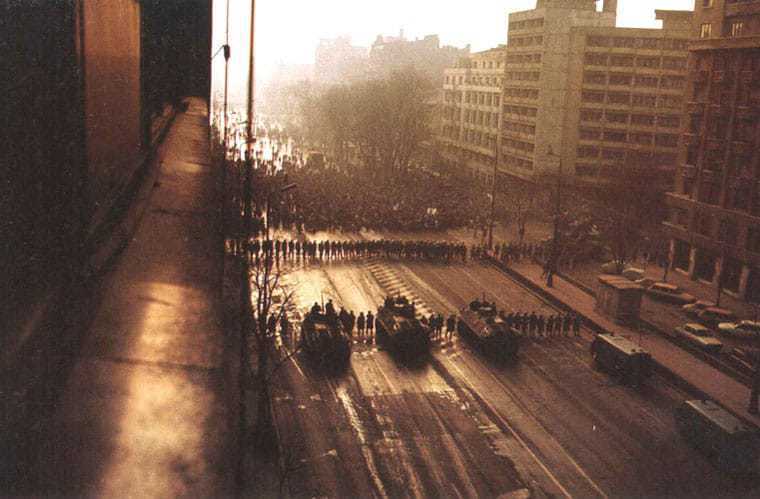 This Day In History: The Romanian Army Joins The Democratic Revolution (1989)

On this day in history, the army changes side in the Romanian Revolution of 1989. On this day in history the Romanian army defects to the cause of anti-communist demonstrators. Without the support of the army, the Communist regime of Nicole Ceausescu was doomed to fall. With the defection of the army, Ceausescu fled with his wife and some supporters. The only supporters that he had left in the country were the hated secret police but they continued to fight as they were fearful of the people’s wrath. The flight of Ceausescu was to make the end of almost 44 years of Communist tyranny in Romania. The Revolution in Romania was the bloodiest in recent European history. In 1989 the Communist countries in Eastern Europe all collapsed with remarkably little violence. The exception was Romania and the Revolution in this country was particularly violent. It is estimated that some 4,000 people died in the revolt against the communist government.

The Revolution began when members of Ceausescu fired on unarmed demonstrators in the city of Timisoara. They had been inspired by the largely peaceful demonstrations that had ended communism in so many other countries. Ceausescu was not going to hand over power and he ordered a clampdown on any signs of protest. The security forces killed dozens of demonstrators in Timisoara but this did not end the protests. There were soon protests elsewhere and when Ceausescu appeared at a mass meeting he was booed and was forced to flee the scene. This was seen by millions of Romanians on television and soon there were demonstrations in every city and town in the country.

After the army’s defection, soldiers fought street battles with members of the secret police. Ceausescu and his wife fled from the Romanian capital in a helicopter but were later captured by the army and convicted of mass murder in a military trial. On Christmas Day, the Ceausescu’s were executed by a firing squad. Ceausescu had been ruler of Romania since 1965. The country had previously been ruled by a Stalinist who had been very repressive. Romania under Ceausescu had followed an independent line within the Communist Bloc. This is seen in his refusal to join the boycott of the LA Olympic Games. Ceausescu was much influenced by the North Koreans and he tried to model his government on Pyongyang’s. In 1989 he had refused to liberalize his government. By this time the country was the poorest in Europe and also the most repressive state in the Eastern Bloc. Romania has become a liberal democracy and is now a member of the European Union.

The Guardian – “It Was Impossible to Have a Revolution In Romania. So, It Had to Be Staged.”