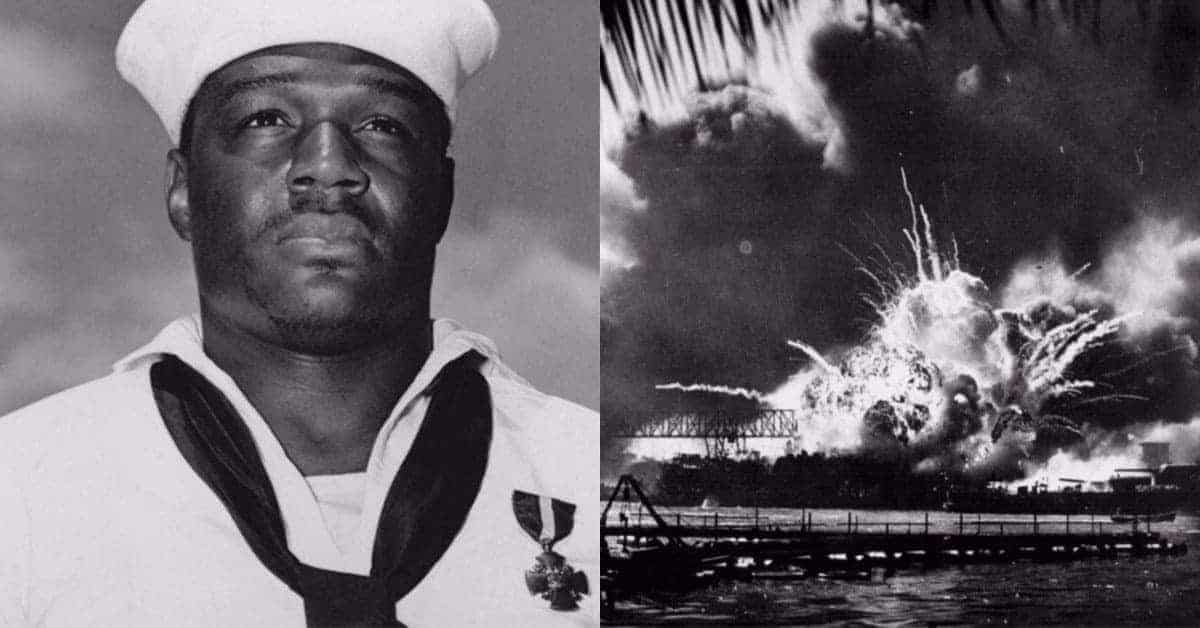 Mess Attendant Doris Miller eyeballed the Japanese aircraft barreling down the sights of his antiaircraft gun. He paused for a second, desperately trying to retrace his steps. The day started like any other. Up at 0600, serving chow by 0700, then down to the ship’s laundry until lunch. All hell broke loose somewhere along the way, however, and now Miller, who was just a simple cook from Texas, suddenly found himself fighting for his life. Oily smoke burned his eyes, while unceasing explosions threatened to rupture his eardrums. Undaunted, he refocused on the plane in his crosshairs and hammered the trigger of the Browning .50 caliber machine gun. The USS West Virginia wasn’t about to go down without a fight and neither was Dorie Miller.

A Day Unlike Any Other

December 7, 1941 begin like any other day for Mess Attendant, Third Class, Doris “Dorie” Miller. Unbeknownst to Miller and his shipmates, however, the Imperial Japanese Navy was fast approaching the Hawaiian Islands, hellbent on destroying the U.S. Pacific Fleet. Shortly after dawn, the first wave of an immense strike force unleashed a crippling and devastating surprise attack on thousands of unsuspecting sailors going about their daily business. Hundreds of Japanese bombs and torpedoes slammed into Pearl Harbor, sinking four warships, dealing serious damage to four others, and taking over 2,000 American lives.

Miller, who was separating uniforms and cleaning linens below deck, was shocked and confused by the initial attack. When general quarters sounded, however, months of training instantly took over. He donned a helmet and ran to his assigned station only to discover the area in shambles. One of the seven Japanese Type 91 aerial torpedoes had struck its intended target, virtually vaporizing the ship’s antiaircraft magazine. Wanting to help his shipmates above deck, Miller raced up a nearby ladderwell and proceeded to “Times Square,” an aptly named junction at the heart of the West Virginia where hundreds of sailors converged daily.

The ship’s communications officer, Lieutenant Commander Doir Johnson, spotted Miller and quickly flagged him down for assistance. The pair of men raced to the bridge where their captain, Mervyn Bennion, lay gravely wounded. Miller and Johnson moved Bennion near the conning tower, where he continued to issue orders despite a gruesome abdominal injury. Another officer then ordered Miller to assist a nearby ensign with the loading of an unmanned antiaircraft machine gun. Unfamiliar with the weapon, Miller nevertheless loaded the gun and then took it upon himself to deliver a barrage of withering antiaircraft fire at the circling Japanese planes above, expending all his ammunition in the process.

With the Browning machine gun run dry, Miller turned his attention back to his wounded skipper. Along with two lieutenants, Miller, moved Bennion up to the ship’s navigation bridge, where the semiconscious captain succumbed to his wounds. Two armor-piercing bombs and an additional pair of Japanese torpedoes suddenly exploded underfoot, threatening to capsize the ship. Miller assisted with the evacuation and was later awarded the Navy Cross for incredible heroism in the face of grave personal danger. The ever-humble sailor later recounted that “I guess I fired her for about fifteen minutes. I think I got one of those Jap planes. They were diving pretty close to us.”

Doris Miller was a Texas native, born in Waco on October 12, 1919. One of four boys, his parents (Henrietta and Conery Miller) provided the brothers with a modest upbringing. Miller was a natural athlete, and made full use of his powerful 6-foot-3-inch, 200-pound frame as an accomplished fullback at A. J. Moore High School. He struggled academically, however, and dropped out of school after repeating the eighth grade. Prior to enlisting in the Navy, Miller spent his spare time hunting small game, while considering a career in taxidermy. He applied to the Civilian Conservation Corps but was turned down, which prompted him to consider military service.

Miller spent a considerable amount of time on his father’s farm, where he worked as a general laborer prior to enlisting in the U.S. Navy. He entered active duty service in 1939, attended boot camp at Naval Station Great Lakes, Illinois, and pursued follow-on training at Naval Training Station, Norfolk, Virginia. Upon completing the latter course of instruction, Miller was appointed as a Mess Attendant, Third Class, and stationed aboard the ammunition ship USS Pyro. Miller spent a brief and unremarkable tour on the Pyro, leaving the assignment for a posting on the West Virginia, during the winter of 1940.

On top of knowing his way around the kitchen, Miller also proved his prowess in the ring, becoming the West Virginia’s heavyweight boxing champion during the first few months of his tour. In July 1940, Miller temporarily served aboard the USS Nevada at Secondary Battery Gunnery School. He returned to the West Virginia on August 3, 1940 and remained part of her crew until the attack at Pearl Harbor in 1941. The attack claimed 130 of Miller’s shipmates, with another 52 wounded or missing in action. Miller’s subsequent assignments included time aboard the USS Indianapolis and the USS Liscome Bay.

Miller saw combat action after Pearl Harbor, unfortunately losing his life to a Japanese torpedo during the Battle of Makin, sometime between 23-25 November 1943. Taking place near the Makin Atoll, the costly engagement was critical to the success of America’s “island hopping” campaign in the Pacific. Miller’s ship, the Liscome Bay, was attacked by a Japanese submarine while performing escort operations around the Gilbert Islands. A series of secondary explosions resulted in the destruction and sinking of the escort carrier, with over 600 men being presumed missing in action. The Navy officially declared Miller dead on December 7, 1943, exactly two years after the attack at Pearl Harbor.

In addition to the Navy Cross, Miller earned several other awards, including the Purple Heart Medal, the American Defense Service Medal (Fleet Clasp), the Asiatic-Pacific Campaign Medal, and the World War II Victory Medal. He quickly advanced through the ranks, from Mess Attendant Third Class to Mess Attendant First Class, eventually achieving the rating of Petty Officer, Ship’s Cook, Third Class. Popular convention holds that Miller’s nickname stemmed from a typo printed in the Pittsburgh Courier following his actions at Pearl Harbor. Regardless of its origins, the name resounded with many of Miller’s shipmates, who routinely referred to the likable cook simply as “Dorie.”

Doris Miller holds the distinction of being the first African-American to have won the Navy Cross. Second only to the Medal of Honor, it’s one of the nation’s most distinguished awards for gallantry and valor in combat. Miller received his award in different times, however; an era where racial biases were still integral elements of mainstream American society. Admiral Chester W. Nimitz, upon presenting Miller with the Navy Cross reflected that, “This marks the first time in this conflict that such high tribute has been made in the Pacific Fleet to a member of his [Miller’s] race and I’m sure that the future will see others similarly honored for brave acts.”

Regardless of his intentions, Nimitz’s remarks fanned the flames of an already blazing political and social debate. Once Miller’s exploits became public knowledge, many negro advocacy groups campaigned upon his behalf. The NAACP and members of the black media, for instance, took sides in a Congressional feud concerning the potential of Miller being recommended for the Medal of Honor instead of the Navy Cross. Opponents of the Senate Bill questioned the political aims of its author, since the document was crafted long before all the details of Miller’s plight reached Capitol Hill.

Exacerbating matters was then Secretary of the Navy, Frank Knox, who staunchly opposed Miller being awarded the Medal of Honor. According to The Dallas Weekly, “A group of historians have discovered that Secretary Knox only wanted to give Dorie Miller a letter of commendation for his actions. It was only after President Roosevelt and Admiral Chester Nimitz intervened that Dorie Miller received the Navy Cross.” A letter of commendation is an unsolicited document that recognizes superior performance of duties, typically delivered to junior service members in a non-wartime environment, and a rather mundane award when compared to the Medal of Honor or Navy Cross.

On a more positive note, a variety of organizations and institutions have recognized Miller’s accomplishments and celebrated the Texan’s life since the conclusion of WWII. The USS Miller (FF-1091) was a Knox-class destroyer that the Navy commissioned in Dorie’s honor. The Veteran’s Affairs Medical Center in Waco, Texas is currently home to a monument dedicated to the mess attendant-turned-antiaircraft gunner, which is also within the proximity of Doris Miller Drive. At least five public schools, from Texas to California, bear Miller’s name. There’s even a park, replete with bronze plaque and monument, dedicated to Miller’s memory on the U.S. Naval Base at Pearl Harbor.

While the raid on Pearl Harbor remains, as President Roosevelt predicted, an infamous historical event, it’s the selfless and heroic actions of men like Doris Miller that truly define our collective memories of the Pacific War. Whether manning an antiaircraft gun in the heat of battle, or touring the Southwestern United States as part of a war bond campaign, Miller’s story touched millions of Americans during his time and continues to do so to this day. Dorie Miller was a hero in every sense of the word, a man who paid the ultimate sacrifice for a grateful and indebted nation.