This African-American Sailor Was Assigned to Kitchen Duty, But Ended Up Earning the Navy Cross Instead 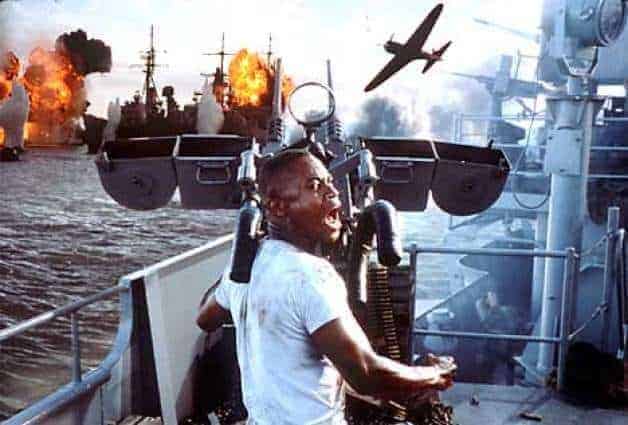 This African-American Sailor Was Assigned to Kitchen Duty, But Ended Up Earning the Navy Cross Instead

When you think about World War II, what comes to mind? Obviously the notion that a power-hungry dictator had a delusional, warped sense of what beauty and perfection mean comes to mind. Also, the fact that the American soldiers along with their Allies fought to preserve life, justice, and equality for all.

Ironically, African-American sailors were fighting for a country that did not view them as equal, to help people across the globe live peacefully.

The 1940s served as a time that showed how a hate for one’s ethnic background could lead to genocide. However, perhaps as a nation, we should take a few minutes to reflect on how much has changed in the past seven decades regarding freedom and the world around us.

As you consider the transition from the 19th century into the 21st, it ‘s hard to forget the damaging day the Japanese armies attacked Pearl Harbor. One true story that will genuinely give you hope is about the first African-American to earn the Navy Cross. 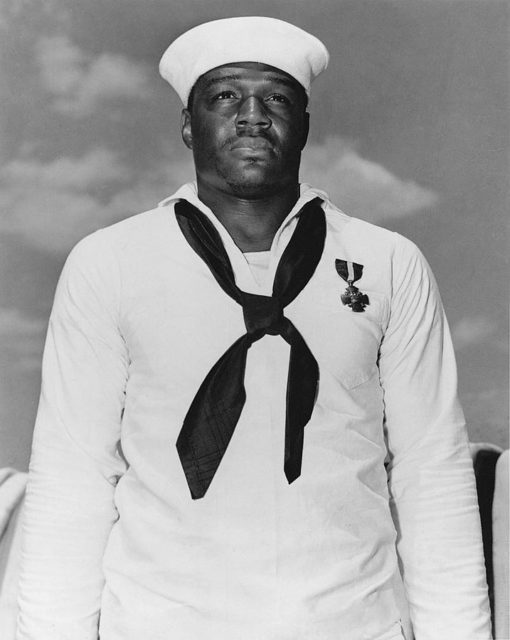 His name was Doris Miller, and he was actually a mess attendant. Nevertheless, the cook quickly dropped his spatula to defend himself. Equipped with just a .50 cal, Miller instantly fought against the onslaught.

After the Civil War, things did not immediately change for African-Americans. In fact, even by the early 1940s, there were barely any open jobs for black seamen. The United States Navy did offer kitchen assignments.
Doris Miller, born in Waco, Texas, joined the United States Navy in 1939.

Being named as a mess attendant was nothing to be ashamed of in any way. Although he did not get to amplify his best assets, every military force must have strength and energy. Where does this come from? Food, of course, so feeding a massive army every single day is quite the job.

Standing at 6-feet and 3-inches, the former high-school football star might have looked a bit out-of-place in the kitchen. Doris Miller was a 200-pound farmer who was strong. He gained the reputation as the toughest heavyweight boxer aboard his ship.

Although he was indeed fulfilling a vital role in the United States Navy, he never had the chance to other opportunities beyond the kitchen. After he had completed training, the young athlete was assigned to the battleship West Virginia. During that time, he became the primary cook. From there, the ship was stationed at Pearl Harbor, Hawaii.

Doris Miller would not only cook for his fellow servicemen and women, but he would also serve as steward to the officers. On the day of the massacre, he was actually collecting laundry. It was Sunday morning when he initially felt the impact.

The Attack on the USS West Virginia

The West Virginia battleship was a direct target for Japanese torpedoes on December 7th, 1941. Doris Miller remembers dropping the laundry and running to an anti-aircraft battery magazine â€” his assigned battle station. Despite limiting his potential to the mess hall, every soldier has a combat task regardless of his daily duty.

Unfortunately, when Miller reached his area, the magazine was already destroyed in the ambush. He urgently made his way to help his captain, who had been mortally wounded and refused to abandon his ship. Doris Miller carried his captain to a safe position despite continuous assaults from the Japanese.

Enthralled in the fight, Doris Miller went to the helm of a machine gun. He recalls not knowing how to shoot the weapon, but he did learn how to load it. The courageous sailor squeezed the trigger and the gun shot just as expected. The cook fired for nearly 15 minutes straight at the enemy until he ran out of ammunition. 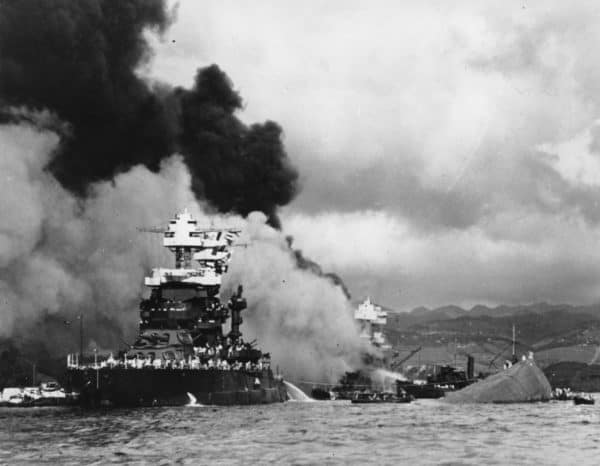 The West Virginia did sink to the bottom of the harbor on that dark morning. Doris Miller and the rest of the Navy crew were able to escape. He is certain he shot down a Japanese plane that day, although he was never given any credit for the kill.

The US Navy released a list of commendations, acknowledging the brave men’s abilities from that morning. By this time, it was January 1940, and Doris Miller was transferred to the USS Indianapolis. Once the names were printed, there was an unnamed African-American sailor listed at the bottom of the page.

Luckily, it did not take long for everyone to know who that black man was: the champion boxer and made-to-be cook Doris Miller. He became not only a national hero but a real inspiration to all Americans because he embodied bravery.

Finally, on May 27, 1942, Doris Miller was formally praised for his selfless efforts. Senator James Mead of New York penned a bill declaring Doris Miller receive the nation’s highest honor. Doris Miller ended up receiving the Navy Cross. It was a humbling honor for him as he was the first African-American recipient.

His Final Battle and Lasting Legacy

Doris Miller helped sell war bonds thanks to his newfound fame. However, it was not long before he wanted to get back on his ship and serve his country. He was assigned to Liscome Bay, an escort carrier. In November of 1943, the ship took part in the Battle of Makin Island. A Japanese torpedo struck the carrier killing Doris Miller.

Even though 200 sailors survived the attack, he was reported missing in action. Finally, a small ceremony was given in his name in April of 1944. It took place in Waco, Texas, his hometown.

Not only was he the first African-American to earn the Navy Cross, but Doris Miller will always be known as the man who could fight wars even though, based on his skin color, he was assigned to do no more than cook.

Actor Cuba Gooding, Jr. had the pleasure of portraying Doris Miller in the 2001 box office hit Pearl Harbor. During the infamous film, you can clearly see the strong fighter did his best during battle, not in the kitchen.