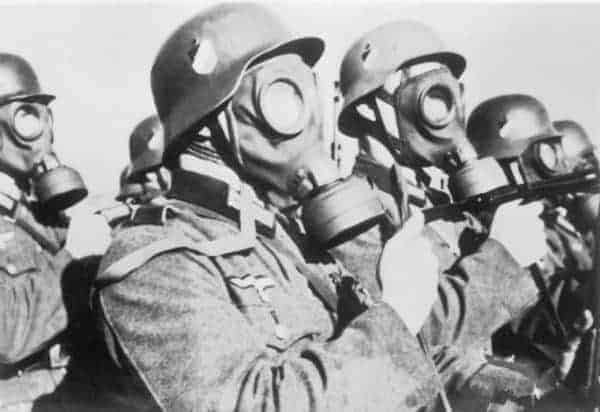 Ethiopia was a lone beacon in a continent of colonies. Despite several efforts by the Italians, the Ethiopians had managed to maintain their independence. However, that all changed when Italy pushed forth with a new offensive in 1935. The mustard gas worked against the Ethiopian army in much the same way that it worked in World War I. Soldiers were demoralized and living in fear over the threat of chemical weapons.

The Italians who were attacking from Eritrea under Marshal Pietro Badoglio were afraid that attacking the Ethiopians would end up much the same way it did in 1896, when Ethiopian forces destroyed a huge Italian army. In order to ensure victory, Marshal Badoglio ordered a massive mustard gas attack against unsuspecting Ethiopians. With no warning of the impending chemical weapon attack thousands of Ethiopians were affected. They suffered burns all over their bodies and many of them painfully suffocated.

The mustard gas proved effective as one attack was able to decimate the Ethiopian forces. From then on it became the weapon of choice for the Marshal Badoglio. General Rodolfo Graziani was also moving in on Ethiopia from the Italian colony of Somalia. At his Southern front, he also found the use of mustard gas to be particularly effective against the Ethiopians. It also worked to prevent Ethiopian troops from entering an area. As the Ethiopian forces often walked barefoot or with sandals and mustard gas could stay on the ground for days, troops were not able to follow Italian and colonial forces after they had sprayed mustard gas.

In World War II, Nazi Germany was response for the deadliest use of poison gas in history. Using carbon monoxide and hydrogen cyanide millions of Jews and other victims were gassed and killed. The prolific use of chemical weapons in concentration camps to kill large numbers of people is contrasted with the limited use of chemical weapons in combat.

Nazi Germany forced concentration camp prisoners to create tabun which was a nerve gas. They even used prisoners as test subjects to determine the effectiveness of the gas. Tens of thousands of tons of chemical weapons were stockpiled by Nazi Germany but it was believed that the Allies had substantially more and therefore Hitler believed that it was not worth the risk to be the first to use them in combat.

In 1943, during a meeting in the Wolf’s Lair, Hitler was told that Germany was in possession of 45,000 tons of tabun and other chemical weapons. However, he was also told that the Allies had far more. In response Hitler ordered that the stockpiles of tabun and sarin be doubled. But he went against the wishes of his advisers and did not send any of the gas to the Russian front because he feared Allied retribution.

Despite Hitler’s reluctance for large scale use of chemical weapons in combat there were a few instances where it was used. In May 1942, 3,000 Red Army soldiers and civilians were hiding out in caves after the Battle of the Kerch Peninsula. They held out for three months until finally the Germans released poison gas into the tunnels which killed most of those hiding. Thousands of people killed around the tunnels were found to have been killed due to asphyxiation from gas.

During the Second Sino-Japanese War, Japanese forced used biological and chemical warfare against several parts of China. The Japanese were known to be willing to do just about anything to defeat the Chinese and they even created their own biological/chemical warfare laboratory. Unit 731 covered six square kilometers of Pingfang, a district of Harbin in the Japanese puppet state of Manchukuo which is now Northeast China.

Unit 731 operated from 1935 until 1945 and it is estimated that up to 250,000 men, women and children were subjected to experimentation by the laboratory. The laboratory tested out both chemical and biological agents against Chinese, Russian, South East Asians, Pacific Islanders and a small number of Allied war prisoners. The vast majority of the victims were Chinese. Some of the prisoners would be given diseases and then dissected alive in order to determine how the disease affected the body.

The Japanese used the information to experiment with germ warfare. They would place plague ridden fleas and infected clothing and supplies in bombs and drop them on different targets. Cholera, anthrax and the bubonic plague were found to have killed as many as 400,000 civilians. Bubonic plaque fleas were also spread by airplanes over coastal Chinese cities. In addition to the fleas there was aerial spraying of the plague over cities which resulted in the deaths of thousands. The Japanese had planned a similar attack on San Diego, California in September 1945, but ended up surrendering five weeks earlier.

The Japanese were not opposed to the use of chemical attacks either. They were used up to 2,000 times in 77 different counties during the war. The chemical weapons attacks claimed the lives of tens of thousands. When the war ended, Japan abandoned much of their chemical weapons in China by burying them or dumping them in rivers. Many civilians were killed by the leaking containers and to this day not all of the canisters have been found or properly disposed of.

On March 16, 1988, the Iran-Iraq war was coming to a close. The Kurdish rebellion was largely extinguished by the mid-1980s, but the Ba’athist regime under Saddam Hussein wanted to remove all Kurdish resistance in the north. There was an order to strike down the Peshmerga rebels and Kurdish resistance by any means possible, including attacks on large civilian populations.

The Kurdish city of Halabja fell to the Iranians as part of Operation Zafar 7. 48 hours after the Iranians took the city the Iraqi forces retaliated as part of their Al-Anfal Campaign. For five hours, Iraqi MiG and Mirage aircraft dropped chemical bombs on the residential areas of Halabja. The bombs were dropped far away from the besieged Iraqi army base on the outskirts of the town. The attack remains the largest chemical weapons attack directed against a civilian populated area in history.

Eyewitnesses reported a range of smells and colors of the gas. Some reported rotten eggs and others said they smelled apples. Rebel commanders in the area reported clouds of white, black and yellow smoke rising up from the city. Those who survived the attack reported that some people died instantly, others died laughing and some burned, blistered and coughed up green vomit. The ensuing panic caused many others to die as people tried to flee by car.

Between 3,200 to 5,000 people were killed in the attack. 7,000 to 10,000 were injured. Once the chemicals were dispersed, Iraqi forces were able to retake the city. Once Halabja was back in Iraqi possession, the entire town was systematically razed with bulldozers and explosives. Today people in the region suffer from increased rates of birth defects and cancer. Some doctors have become concerned that the chemicals used may have had lasting genetic effects on the population due to the increased rates of birth defects.