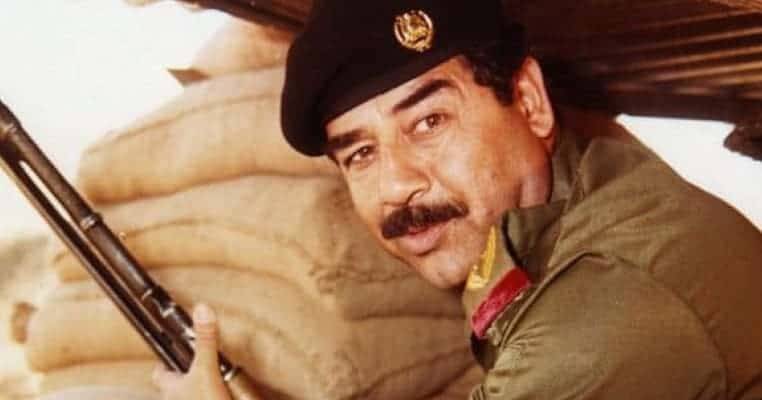 Saddam Hussein was a figure whose reign of terror was supported by the United States until he could no longer fulfill its political agenda in the Middle East. He was overthrown by the country that had previously supported him and then executed by his own. Keep reading to learn more about this infamous dictator.

Saddam Hussein was born on April 28, 1937, in the Iraqi city of Tikrit. His father was a shepherd, and both he and Saddam’s older brother died, presumably from cancer, while his mother, Sabha, was pregnant. By the time he was born, she was consumed with grief and depression.

29. His Uncle Raised Him

Sabha tried to abort her unborn child and commit suicide. When he was born, she wanted nothing to do with him and handed him over to her brother’s family to raise him. His uncle helped influence the political ideologies, particularly nationalism and a hatred of Kurds and Shi’as, that he would hold to.

28. His Stepfather Was Abusive

Saddam’s mother remarried, to a man named Ibrahim al-Hassan. He returned to his mother, but his stepfather was so abusive that when he was 10, he fled back to his uncle’s home and spent the rest of his childhood in Baghdad. He went on to study law.

Saddam’s uncle, Kharaillah Talfah, was a Ba’athist nationalist. The Ba’athist party promoted pan-Arab unity across the Middle East as a response to colonialism and imperialism, particularly in regard to the region’s oil. Saddam joined the party when he was 20, when pan-Arab nationalists were gaining power in the Middle East.

26. In 1959, Hussein Attempted to Assassinate the President

Iraq’s current president, Abd al-Karim Qasim, did not want to join the United Arab Republic, a nascent pan-Arab union, and he allied with Iraq’s growing communist party. The Ba’athists tried to assassinate him, and Saddam was part of the attempt.

Following the failed assassination attempt, Saddam fled to Syria, the birthplace of the Ba’athist movement, then to Egypt, where pan-Arab nationalism was strong under President Gamal Abdel Nasser. While in Egypt, he continued to study law. He remained there for about three years before he returned to Iraq in 1963.

24. He Was Imprisoned in Iraq But Escaped

He participated in an assassination attempt against Iraq’s new president, Abdul Salam ‘Aarif, and was imprisoned in October 1964. He remained in prison for two years before successfully escaping in 1966. He became Deputy Secretary of the Regional Command under Ahmed Hassan al-Bakr, who would later become president.

23. Hussein Participated in a Coup

In 1968, the Ba’athist leader Ahmed Hassan al-Bakr led a bloodless coup against Abdul Salam ‘Aarif’s brother and successor, Abdul Rahman ‘Aarif. Saddam’s role in the coup was insignificant, but with al-Bakr as the head of the new government, Saddam became his deputy. He then eliminated the non-Ba’athist leaders who had participated in the coup.

As deputy, Saddam carried out many modernizing reforms, bringing about improvements to Iraq’s healthcare, education, agriculture, and transportation. He also brought the oil industry under Iraqi control so that it could no longer be exploited by Western powers, especially the United Kingdom and the United States.

In addition to modernizing reforms, he believed that the future and security of Iraq and the pan-Arab state that he hoped would come about, depended on military might. He developed chemical weapons that he frequently used against Iraqi civilians, mainly the Kurds, who lived in the northern part of the country.

Saddam had been the de facto leader of Iraq for years, and in 1979, he forced al-Bakr to resign. This event happened the same year as the Iranian Revolution, and the world watched anxiously to see what effects the revolution would have on Iraq’s Shi’a majority.

Check this out: 22 Images of the Iranian Revolution.

19. Saddam Hussein Had Many of His Opponents Executed

Less than a week after formally ascending to the presidency, Saddam called a meeting with all leaders of the Ba’ath party. He read from a list of 68 names, and as he called out each name, that person was arrested and imprisoned. All were tried for treason, and 22 were executed. Within a year, most of his opponents had been killed.

In September 1980, Saddam invaded Iran, presumably to quell the Shi’a uprising there and prevent it from spreading to Iraq, in what Iran came to see as an act of war. The Iran-Iraq War would last for nearly a decade and claim over a million lives on each side.

17. The United States Supported Him

Though Iraq was clearly the belligerent and had made the first move by invading Iran, many countries, including the United States, threw their support behind Iraq and provided Saddam with much of the weaponry, ammunition, and funds that he used to fight the war against Iran.

In 1988, an internationally brokered ceasefire brought about an end to the Iran-Iraq War. Neither side was declared victorious, and Saddam had gained neither territory nor oil rights. In 1990, he attempted to gain control of Kuwait’s oil fields in an invasion that sparked the Persian Gulf War.

15. He Used Chemical Weapons Against His Fellow Iraqis

Part of the terms of ending the Persian Gulf War included Iraq dismantling its chemical weapons program, which had been used to kill many Iraqi civilians. One of the most notorious was the Halabja chemical attack, in which mustard gas and unidentified nerve agents killed or injured as many as 15,000 people.

Though his rise in politics was mired in intrigue and subversion, he held regular elections and continued to be popularly elected by the people. The catch is that his name was the only one that was allowed on the ballot. No wonder he consistently won with 100% of the vote.

Following the September 11 attacks, Vladimir Putin of Russia suggested that Iraq had been building weapons of mass destruction, which could be used in an even greater terrorist attack. Allegations of WMDs led to the US invasion of Iraq, but the alleged weapons were never recovered.

Though the United States had initially supported Saddam, mainly through the 1980s, one of the primary goals of the 2003 invasion was to find Saddam. Baghdad quickly fell to the American forces, but Saddam was nowhere to be seen. The military undertook a massive search to try to get him.

Eight months after the first invasion of Iraq, a group of American soldiers found him hiding in a bunker near a farmhouse just outside of his hometown of Tikrit. His beard was overgrown, so they forced him to shave so that they could verify his identity.

10. He Was Tried for Crimes Against Humanity

Saddam was physically placed in the custody of the United States government and its operations in Iraq, but he was legally handed over to the interim Iraqi government for trial. Amongst other heinous crimes, he had ordered the use of rape as a political tool.

9. He Challenged the Court that Tried Him

During Saddam’s trial, he engaged in behavior that was considered by many to be bizarre and erratic, leading some to question his sanity. He contested the legitimacy of the court because he was still legally the president of Iraq. The trial lasted over two years.

8. Saddam Hussein Was Sentenced to Death

In December 2006, the court found Saddam to be guilty of crimes against humanity and gave the death sentence. The same verdict and judgment were handed down to some of his family members, including two of his half-brothers. They all appealed the conviction, but it was upheld.

Saddam expressed the wish to be executed via a firing squad, but instead, he was hanged on December 30, 2006. This date was the first day of ‘Eid al-Adha, the festival of the sacrifice, in which devout Muslims commemorate the prophet Abraham’s near-sacrifice of his son. The irony, or perhaps symbolism, was not lost on the Iraqi people.

6. Hussein Was Buried in His Hometown

Saddam’s daughter, Raghad, who lived in exile in the neighboring country of Jordan, requested that he be interred in Yemen until the violence in Iraq. Presumably, her request was made because she anticipated his burial could provoke more violence and unrest. Despite her request, he was buried in al-‘Awja, his hometown, near Tikrit.

Like many other dictators, Saddam left behind a mixed legacy. He engaged in multiple unsuccessful wars, most notably in Iran and Kuwait, though he claimed victory in each. Following the collapse of Iraq’s interim government and the rise of ISIS, many Iraqis looked back fondly on the days of Saddam.

4. Hussein Killed Many of His Own People

In addition to killing off many of his political opponents, Saddam tortured and killed many Iraqi civilians. His uncle who raised him had imbued within him a hatred of both Shi’as and Kurds, both of whom made up a large part of Iraq’s population. In 1991 alone, he had as many as 180,000 people killed.

3. The CIA Had Previously Tried to Assassinate Him

President Bill Clinton ordered frequent airstrikes in Iraq throughout the 1990s and hoped that internal dissidents in Iraq would overthrow Saddam. CIA operative Robert Baer reported that in 1995, the CIA had attempted to assassinate him after trying for a decade to initiate an Iraqi-led coup against him.

2. Iraqis Toppled a Statue of Him

Following the American invasion in 2003, a giant statue of Saddam in Baghdad’s Firdos Square was toppled by the Iraqi people. Many went on to beat the figure with their shoes, a symbol of ultimate degradation and shame. The crumbling of the statue represented the end of the Battle of Baghdad and the end of Saddam’s reign of terror.

Just a few hours after Saddam Hussein was buried in his hometown of al-Awja, nationalists from the Ba’ath party draped a giant Iraqi flag over his grave. Hundreds of people visit his grave every day, often with a sense of nostalgia for Iraq before the American invasion and later takeover by ISIS.

“Watch: This is what Saddam Hussein’s tomb looks like after the Islamic State’s occupation of Tikrit,” by Adam Taylor. The Washington Post. March 16, 2015.