Alexander Wasn't the Only Hamilton to Fall in a Duel 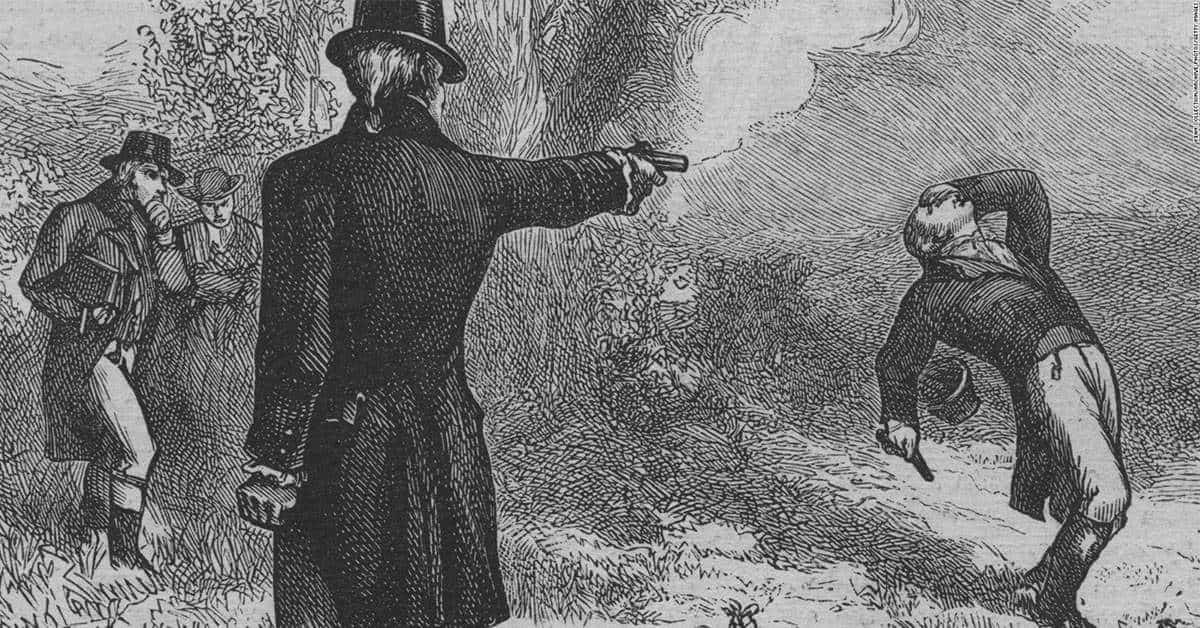 Alexander Wasn’t the Only Hamilton to Fall in a Duel

On the hot morning of July 11, 1804, the former first Secretary of the Treasury of the United States, Alexander Hamilton, stood on a narrow strip of land in Weehawken, New Jersey. Although the practice of dueling – also known as an Affair of Honor – was illegal in New Jersey, the ground upon which he stood was known in both New Jersey and across the Hudson River in New York City as the Dueling Grounds. Hamilton was familiar with the grounds and the practice of dueling, having been engaged in at least eleven such affairs before that day.

In fact, he had, according to his own letters, twice stood before the opponent he faced that day, the sitting Vice-President of the United States, Aaron Burr. (Burr later claimed that they had faced each other but once before; official records are non-existent because dueling was a crime).

While waiting for Burr, Hamilton’s thoughts in the moments before the duel commenced may have strayed to an earlier day when on the same ground his eldest son had stood facing an offended gentleman in yet another Affair of Honor. Indeed, Philip Hamilton had used the same set of pistols, borrowed from an uncle, which Hamilton and Burr were using in their confrontation; there is a fifty-fifty chance the father held the same weapon his son had held on that same ground when he, the younger Hamilton, had received his fatal wound.

That Alexander Hamilton died at the hand of Aaron Burr in an ill-advised duel is a well-known event in American history. That Hamilton’s eldest son died from wounds received on the same ground, using the same weapons, just a few short years before is one of America’s lesser-known tragedies.

Philip Schuyler Hamilton was the firstborn son of Elizabeth Schuyler Hamilton and her husband Alexander. Born in 1782, in the penultimate year of the Revolutionary War, Philip was the apple of his father’s eye. He had what was considered at the time a liberal education, eventually graduating from Columbia College in New York (today’s Columbia University) with honors in 1800. He studied law by the then-common method of reading it under the tutelage of a practicing attorney.

As the son of a prominent and well-to-do citizen of New York – already well on the way to being the nation’s financial capital as well as its center of entertainment – Philip enjoyed the city’s diversions in the company of many friends. He was, somewhat in the mold of his accomplished father, possessed of a sense of fun which in today’s world would label him a “player.” His father gently attempted to reign him in with a daily schedule suggesting an itinerary which included time set aside for recreation, but there is little evidence that the son followed the father’s plan.

By 1800 the American political scene had developed into a system of political parties, despite the grave warnings to avoid partisan politics from the beloved George Washington. The political parties had emerged in large part out of the debates over the constitution described in The Federalist Papers, in which Alexander Hamilton had argued for a strong federal government, in opposition to the Democratic-Republicans, who believed that true power resided in the several states.

By 1800 the young American republic had also nearly gone to war with revolutionary France, an event which led President John Adams to call for the formation of an American Army, with Alexander Hamilton – a former military aide to Washington – at its head as commander. War with France was averted by cooler heads on both sides despite several naval clashes, but passionate discourse on the subject remained rife in the United States.

Washington, D.C. of the day being barely a village, the center of American political debate was in New York, where the Jeffersonian Republicans’ believed that a strong federal government would destroy individual liberties. Hamilton and the Federalists believed that a strong federal government was all that protected liberty from outside predators such as the French.

Young Philip Hamilton agreed with the arguments of his father, and said so frequently and forcefully, although not in a manner which interfered with his enjoyment of the social life of New York. On the 4th of July, 1801, just a few months after Thomas Jefferson and Aaron Burr were inaugurated as President and Vice President respectively, the younger Hamilton attended an Independence Day celebration, the first in the nation with the Republicans in power.

Among the activities was a speech by a militia captain and New York lawyer named George Eacker, who roundly condemned the recent raising of an Army against France, comparing Alexander Hamilton to Julius Caesar in his desire to conquer the republic at the head of an army, and praising republican political sentiment for saving the country. Young Hamilton was displeased.

He mulled over his displeasure for several months until, in November, he happened upon Eacker during the performance of a play at Manhattan’s Park Theater (then known as the New Theater, it would become the Park decades later when no longer new). In the company of a friend Philip interrupted Eacker and his party, which included two young ladies of fashion, in his box and using insulting language of the day, (which would be considered mild by 21st century standards) goaded Eacker into an indignant response.

The parties retired to a nearby tavern – the early 19th century equivalent of stepping outside – and Eacker informed Hamilton that he expected to hear from him, a statement which meant that he expected Philip to send a second to arrange for Eacker to obtain satisfaction – in other words, to fight a duel. Eacker then returned to the theater where within the hour he received a letter from Hamilton proposing a duel.

Historians dispute whether this image is of Philip Hamilton or a younger brother. If Philip it was drawn after his death by another brother. It was customary in the manners of the day for representatives of the injured parties to attempt a means of restoring injured honor without resorting to violence, and just as customary for such efforts to be huffily rejected.

Dueling was illegal in both New York and New Jersey, although slightly less so in Jersey, whose constables presumably had better things to do than babysit dishonored New Yorkers. The duel was arranged for the afternoon of the 23rd, in what is now Jersey City, using pistols provided by Hamilton’s uncle. In this the duel deviated from convention; as the “injured” party the choice of weapons should have been Eacker’s, but he evidently did not object to either the breach of etiquette or the weapons selected.

Alexander Hamilton, experienced with the field of honor, did not attempt to dissuade his son from facing Eacker, but instead encouraged him to delope, a French term which meant to deliberately fire to miss his opponent, thereby restoring honor and ending the duel. In the event it is possible Philip tried to do so, both parties held their fire for nearly a full minute after the call of “present” before Eacker fired, wounding Philip just above the right hip.

Philip’s pistol discharged harmlessly as he fell. Philip died after 14 hours of agony, his father and mother at his bedside. Philip’s mother was three months pregnant at the time of her son’s death; the following year the newborn would be named Philip Hamilton II in honor of his deceased brother. Eacker, his injured honor restored by the standards of the day, fled to avoid prosecution.

Whether Alexander Hamilton mulled over these events while facing Aaron Burr on that July morning will never be known for certain, but it is easy to imagine the still-grieving father considering the strangeness of the thing. After his son’s death, the recently founded New York Post published an article – probably written by Hamilton – calling for laws against dueling to be enforced, writing that “…the voice of an individual or of the press must be ineffectual without additional, strong, and pointed legislative interference.” Yet there he stood on honor’s field with pistol in hand, facing the Vice President of the United States over what was, in essence, a political disagreement.

Alexander Hamilton fell into a black despair in the aftermath of his son’s death, one from which he did not emerge in the few short years of life remaining to him. It was said of him by contemporaries that he even looked different. His personal despair was hardened by his dwindling political influence; the rising popularity of Thomas Jefferson and the Democratic-Republicans foredoomed his own political power and ambitions.

When Aaron Burr decided to run for Governor of New York – in effect relinquishing the Vice Presidency if he won – Hamilton worked hard in opposition. Several letters written by Hamilton were deemed to be slanderous by Burr and his supporters, leading to the eventual demands for satisfaction. Hamilton, despite his professed opposition to the practice in the aftermath of his son’s death, accepted the challenge.

Historians have long debated whether Hamilton intended to delope as he faced Aaron Burr. He did shoot harmlessly into the air, but opinions from the observers differed as to the whether or not his action was deliberate. There is also debate over which party fired first. What is agreed upon is that Hamilton was wounded above the right hip. He was carried across the river to Manhattan, where he died the following day.

Like Eacker, Burr fled temporarily to avoid prosecution. The idea of the Vice-President of the United States on the lam from a murder charge is a bizarre consideration today, but it happened. Burr later returned to Washington and as Vice President presided over the impeachment trial of Salmon P. Chase, never facing charges for violating the laws of two states. (Eacker died of tuberculosis two years after the death of the younger Hamilton, he too never being charged with murder)

Today, the pistols which struck down Hamilton’s son and father can be seen in at JP Morgan Chase and Company in their headquarters on Park Avenue, New York City.