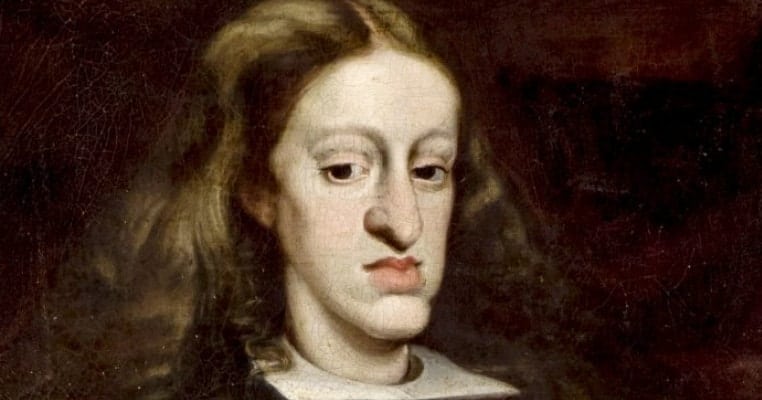 23. Belgium Has a City Named After King Charles II

In 1666, when Charles was only five years old, and rumors were already spreading throughout Europe about the crown prince’s poor health, the people of Belgium decided to name a city after him. The city had previously been known as Charnoy, but they renamed at Charles-Roi, which translates as “King Charles.” Today, it is known as Charleroi, a shortened version of Charles-Roi.

Marrying a relative causes genetic problems for the children because of how the genes interact with each other. Usually, if one parent gives a gene that is deficient, the corresponding gene from the other parent cancels it out. For inbred children, though, often inherit the same genes from both parents. Case in point: 25% of Charles’ genes were duplicates, meaning that fully one-quarter of his genes were the same from both parents.

True, Charles had an incredibly high inbreeding coefficient that undoubtedly contributed to his health problems. Surprisingly, though, his sister, Margaret Theresa, didn’t share those problems (though she did have the Habsburg jaw). She was born into the same inbred family and had the same “inbred coefficient,” but many saw her as a pretty young woman. She might have been more fit to rule than her brother.

20. Margaret’s Marriage Was a Big Deal

Because of Charles’ ill health, the marriage of Princess Margaret was considered a tremendous issue, at least in part to ensure that there was a successor to the throne. Like so many behind her, though, Margaret married her paternal cousin, who was also her maternal uncle (inbreeding causes family trees to grow straight up without any branches). She married Leopold I, Emperor of the Holy Roman Empire.

19. Princess Margaret Had Her Own Health Problems

Though not nearly as sick as her brother, Margaret had her own health problems that she had to contend with. Many hoped that she would produce an heir to the throne, but she was unable to have any children. She had two miscarriages and, though she did give birth to six children, only one survived infancy. He would become the Dauphin of France, not the King of Spain. Margaret died during her seventh pregnancy.

Spain was an absolute wreck when Charles ascended to the throne. It had been embroiled in a 28-year-long war, the Portuguese Restoration War, which ended with the Treaty of Lisbon. The Treaty of Lisbon recognized Portugal as an independent, sovereign state with its own ruling family. The new country would be ruled by the House of Braganza, whose members enjoyed much better health than the Habsburgs.

Poor King Charles. He inherited a mess that he did not have the mental capacity to manage (he could barely even eat or talk), and his inability to produce an heir led to wars that split the Spanish Empire. Because of the War of Spanish Succession following his death, Spain lost its claim to parts of Holland, Italy, and Britain. The Habsburgs still retained most of the power in Europe, but their hold on Spain came to an end.

16. The End of the Habsburg Dynasty

The death of King Charles II brought about an end to Habsburg rule in Spain and was the beginning of the end of the Habsburg Empire. They would retain their hold on Austria and the Holy Roman Empire (which was neither holy, nor Roman, nor an empire) for a few more decades, but they would never again have the same power and prestige. Basically, their inbreeding led to their destruction.

Because of Charles’ inability to rule, there was a veritable “game of thrones” at his court. Allegedly, the person that someone had to see to garner favors in the court was Fernando de Valenzuela, who was affectionately known as “duende,” meaning that he knew how to get sweets with the king.

The irony of Charles’ court is the level of anarchy that existed within it. Fernando de Valenzuela, who may have actually been the lover of Charles’ mother, was the man who introduced ambassadors in the court. He was himself appointed to be ambassador to Venice, but traded that to be closer, in Granada, then trading that role to be prime minister.

13. The Family Feuds Were Epic

When Charles ascended to the throne at the age of three, his mother Mariana, served as queen regent, ruling in his place. Her lover was Fernando de Valenzuela, the man behind much of the intrigue at court. To make matters worse, Charles had a half-brother, John of Austria the Younger, that many people believed was the legitimate ruler.

Charles’ mother declared him unfit to rule, but she wasn’t prepared to hand the throne over to the bastard son of her deceased husband. If she had, the War of Spanish Succession might have been avoided. Not only did John not have the disabilities that Charles had, but he was also a decorated military figure who had made gains in the Netherlands, Portugal, and Dunkirk.

11. John Would Seize the Throne

John of Austria was quite popular in Spain, seeing as he was a decorated military figure and the king, his half-brother, was not even able to take care of his own self. He ousted Mariana, who had been serving as queen regent, and in 1677, initiated a coup in which he obtained the throne from Charles. He died two years later; the rumor was that he had been poisoned.

10. The Game of Thrones Continues

Shortly after John of Austria seized the throne, he found himself at the center of a fictitious plot instigated by Titus Oates. Oates fabricated a story in which Catholic forces, presumably from Spain and France, would invade Protestant England in a bid to bring Catholicism back. The plot was revealed to be a discovery when Oates couldn’t say what John looked like, meaning that he had never spoken with him.

9. The Country Soon Headed for War

There was much uncertainty and fighting over the crown following the death of King Charles II in 1700. Ultimately it was given to Philip of Anjou, aka Philip V. Unfortunately, the web of political marriages throughout Europe meant that though he was the son of Maria Theresa, Charles’ sister, he was also the son of France’s Grand Dauphin. There would soon be trouble between France and Spain.

8. When His Wife Died, Charles Remarried

Marie Louis d’Orleans passed away in 1689, and there was no clear successor to the throne. The coup led by John of Austria made the task of securing an heir even more critical, so the court betrothed Charles to Maria Anna of Neuberg. Her family’s claim to fame was that they had a lot of healthy boys, so surely, she would produce an heir.

Though Maria Anna would become the Queen of Spain, she would hold very little power. Her primary job was to produce a male heir, but this task was something that she would not be able to do. No matter how many healthy boys had been born into her family, nothing could change the fact that Charles was sterile. After his death, his autopsy would reveal that he had only one testicle, and it was shriveled.

6. Trouble Brewed Between Spain and Austria

Maria Anna was from the other Habsburg stronghold, the Austrian Empire. Seeing as her only job was to produce a male heir for Spain, and she was unable to fulfill this role, though, he became a political pawn in a growing family feud between the Spanish and Austrian Habsburgs. She was loyal to her Austrian family, and her husband had to banish some of her German attendants.

5. Maria Anna Couldn’t Get a Break

When Charles II died without an heir, the line of Habsburg succession in Spain came to an end. Maria Anna had to move around to different places but could not escape the escalating feud between the Austrian and Spanish Habsburgs. She finally fell out of the spotlight, moved to France, and married a barrel-maker. Classic celebrity trying to live life on her own terms.

4. Maria Ana Was an Inspiration for One of Victor Hugo’s Novels

The French novelist Victor Hugo, who wrote classics like Les Miserables and The Hunchback of Notre Dame, depicted the life of Maria Anna in a play called Ruy Blas. It is about a queen (presumably Maria Anna) who married a commoner. Ultimately, though, the play is a tragedy, meaning everyone dies at the end.

Though Charles’ impotence was almost certainly due to his inbreeding, various people were called to court to try to figure out the “true cause.” An astrologer suggested that when his father died (when Charles was three), he did not give him a proper goodbye. His mother actually had Philip IV exhumed so that Charles could bid him a fitting farewell. Needless to say, the effort didn’t work.