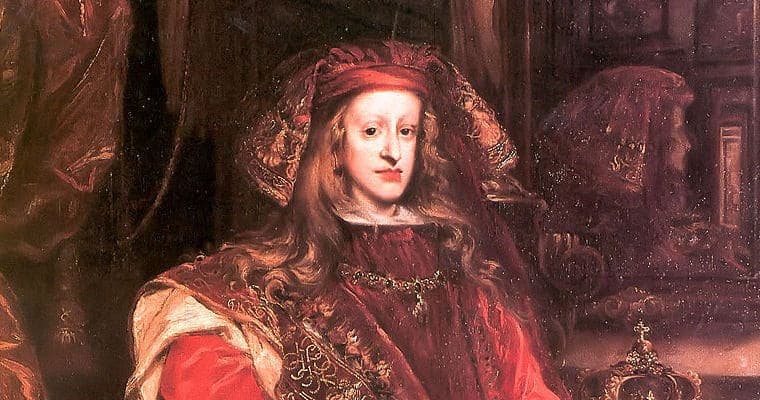 Today, we think of marriage as something you do when you’re in love. But that’s actually a pretty new development. For much of history, marriage was more about securing wealth and power. Marriages were arranged by families to tie themselves to other families. You always wanted to marry your children to people with more status, not less. And it’s safe to say that few families in history have played the marriage game as well as the Hapsburgs. Starting with a single Swiss count, the Hapsburgs married themselves into positions of power until the family had put kings on the thrones of at least seven different countries.

Not bad, right? But of course, this success quickly became a problem. If you marry your way into the very top of royal power, who do you marry your children to once you get there? More importantly, what’s to stop another family from using clever marriage arrangements to replace you? And so the Hapsburgs, like many royal houses, came up with an effective- if sort of gross- solution: they would just marry each other. By marrying close relations, usually first or second cousins, the Hapsburgs ensured that their wealth and power stayed in the family.

Of course, you can really only marry cousins to each other for so long before nature starts to create some issues. You see, there’s a reason- besides the obvious fact that its sort of distasteful- that people try to avoid marrying their relatives. When people with closely related genes have children, it increases the odds of birth defects. And a few generations of inbreeding can lead to some really disturbing results. And the Hapsburgs were about to see exactly how devastating the results of inbreeding can be with the birth of Charles II, King of Spain.

Spain was one of the many countries that the Swizz Hapsburgs had managed to marry themselves into. And even for a family known for inbreeding, the Spanish line of the Hapsburgs was particularly inbred. In fact, all eight of Charles’ grandparents were descended from the same two people. And Charles’ father, Philip IV, and his mother, Mariana, were actually uncle and niece. As you can imagine, Charles had some wonky genes. For a start, his skull was slightly longer than it should have been. And his body was small and frail.

Charles also had an extreme case of what was often called the “Hapsburg Jaw.”Generations of inbreeding had left the Hapsburg’s with a common set of features, chief among them was a tendency for the lower jaw to stick out past the upper jaw. Charles II showed all of these Hapsburg features like a turned-down nose, a slightly flattened face, and most of all, a prodigious underbite. Based on his deformities, many people assumed that Charles would die. But Charles lived, and in many ways, his life turned out to be nature’s revenge on the Hapsburgs.

Just a few years after his birth, with the death of his father, Charles became the King of Spain. Obviously, no one expected the four-year-old Charles to actually rule, but as the only heir of Philip, he was expected to grow up to one day take over the responsibility of ruling one of the largest empires in history. Usually, this would mean getting a good education and learning to manage affairs around the palace. But, Charles II was so weak that his tutors worried that too much education might be harmful to his body. Instead, Charles was allowed to do basically whatever he wanted.

No one tried to make the young king learn any of the skills he would need if he was ever going to rule. In fact, he wasn’t even expected to keep himself clean. Charles was almost famous for his lack of hygiene, wandering around in a state of near-permanent filth. His stench was said to be unbearable and he frequently left his hair unwashed or combed. As Charles grew, his underbite would eventually make it difficult for him to even chew his food. It also made it difficult for him to speak clearly and left him with an unfortunate habit of drooling.

Altogether, Charles wasn’t exactly fit to rule. So, his mother, who had ruled as queen-regent since his father’s death, more or less handled all the affairs of state. Charles himself did little but practice shooting on his estate. And as his 14th birthday approached, the age at which he would be legally allowed to rule on his own, his mother declared that based on Charles’ disability, it would be better if she just continued ruling the country for him. But this decision didn’t sit well with everyone, particularly Charles’ illegitimate half-brother, John of Asturia the Younger.

John launched a palace coup against the queen, deposing her and taking over control of the country for himself. After marching into the palace to take control of the young king, John was forced to pinch his nose at Charles’ stench and demanded that the boy at least go and brush out his hair. Now the power behind the throne, John set to putting the country in order. But this turned out to be much more difficult than he might have imagined. Even though they controlled a huge amount of territory overseas, Spain was dealing with a number of serious problems.

The huge amount of gold and silver coming in from the New World – and the reckless spending of it- meant that Spain’s currency was rapidly becoming worthless. To make matters worse, Spain’s government was a mess. The country was a patchwork of regional counts and barons with little loyalty to the king’s government. And John, who might have been able to fix these problems, died shortly after taking power. The country needed a strong ruler to hold it together. But Charles just wasn’t able to be the king the country needed.

It’s hard to blame Charles for being a weak king due to his disability. But the country at least needed an heir who could prove to be more capable than his father. So, a marriage was arranged for Charles with a French royal named Marie Louise. By all accounts, Charles quickly fell in love with Marie Louise. But as the years rolled by, the couple failed to produce a child. After ten years of marriage with no children, Marie Louise became increasingly depressed and began gaining weight. Finally, after a fall from a horse, she died. Charles was heartbroken, but his court quickly arranged another marriage. They still needed an heir.

However, Charles’ second marriage didn’t produce any children either. The most likely explanation is that Charles himself was sterile. And his new wife, Maria Anna of Neuberg, began to rule the country with Charles’ mother, who had returned to the court after John’s death. One of the few things Charles actually did independently as king was called for an examination of the Spanish Inquisition. An attempt by the Church to root out heresy, the inquisition burned thousands of people at the stake. Charles demanded a report to find out if all the people they were burning were really heretics. The result was so damaging that the head of the Inquisition demanded that Charles burn it, which he did.

Meanwhile, the country continued to decline in the face of famine and numerous outbreaks of plague. To make matters worse, there was an almost continual state of warfare as the country battled France over the Spanish possessions in the Netherlands. Charles’ health also continued to decline. For decades, everyone had been expecting Charles to die at any moment. And year after year, they were surprised that he managed to survive. But by the time he was 35, Charles was obviously deteriorating mentally and physically.

Charles became increasingly unhinged as the stress of ruling a troubled kingdom began to wear him down. He was prone to fits of rage or sudden acts of madness. He once even demanded that the bodies of his dead family members be pulled out of their tombs so he could look at them again. Finally, the day everyone had been waiting for came. Charles the second died at 39. According to the doctor who performed his autopsy, the king’s body, “Did not contain a single drop of blood; his heart was the size of a peppercorn; his lungs corroded; his intestines rotten and gangrenous; he had a single testicle, black as coal, and his head was full of water.”

It’s hard to say for certain if this was actually true, but what is certain is that Charles’ death led to disaster. In his will, Charles named Philip, grandson of the French king, the King of Spain. Fearing that this would give the French too much power, England, the Netherlands, and the Holy Roman Empire allied against them. This lead to the War of the Spanish Succession. And though Philip held on to his Spanish throne, it was a costly blow to the Spanish Empire and the end of the Hapsburg line in Spain. It just goes to show that no matter how powerful a family is, they can’t defy nature forever.