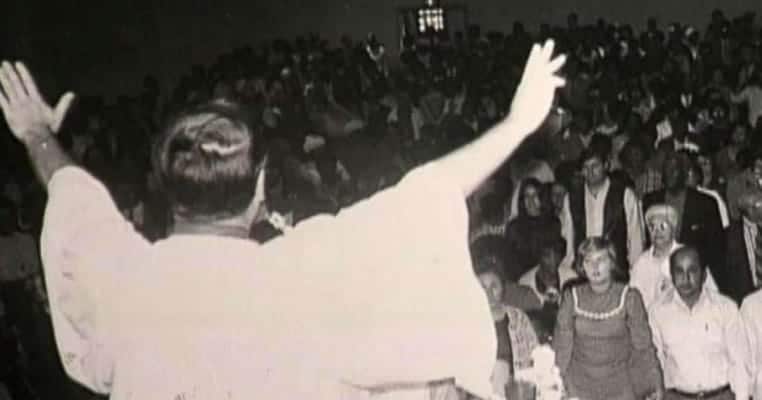 16. The People’s Temple Became More Of A Socialist Movement

The People’s Temple started as a religious organization. While it followed its own agenda, people still considered the Peoples Temple a church. However, its plan also included a lot of values that tied with socialism, which is one reason Jones moved the organization to California and then Guyana.

Jones wanted to take all his followers and live in one location. He told them that he would be their leader, whether they felt he was their father, brother, pastor, or god. He would be whatever they needed him to be, but they had to follow him. People had to listen to him and live near him.

Jim Jones needed to do a lot of persuading when it came to asking nearly 1,000 people to move to Guyana. While some members would go without much question, many didn’t want to leave their home, job, extended family, and friends. They wanted a good reason to why they should go.

Jones persuaded many people by telling his members American society is full of evil. They only way they could escape from the evil soaring around them was to move to Guyana. They would purchase land away from any sin, allowing them to survive.

14. Peoples Temple Members Rehearsed the “Revolutionary Suicide” Before the Massacre

Jim Jones planned the Jonestown massacre for a period of time. We know this because of the practice suicide members took part in before the killings. Jones referred to these practices as “white nights.” These rehearsals included recordings of Jones talking over speakers so everyone could hear.

The rules were no one could talk when Jones spoke, and they had to listen for him to call “white night.” Once the members heard “White Night! White Night! Get to the pavilion! Run! Your lives are in danger!” on the speakers, they all had to run to the middle of the camp.

The “white night” warning worked for Jones and the Peoples Temple because he convinced his members the United States put Africans and African Americans in concentration camps. Jones told them people walked up and down the streets with guns. When he yelled, “white night,” people were coming to their camp to take them away.

Jones convinced his members he protected them with this warning. Once everyone came to the middle of the camp, women brought out Kool-Aid in a cup. Everyone had to take a drink, or people forced them to drink it.

12. They Murdered Hundreds of Children During The Jonestown Massacre

During ABC’s “Truth and Lies: Jonestown – Paradise Lost” documentary, Stephen and Jim Jones, Jr. discussed the reality of their situation. While most people saw the Jones family as the “rainbow’ family, this wasn’t true on the inside.

Behind the door, were Jones’ children who felt they didn’t have a father. Many of his kids resented the Peoples Temple because they thought their dad loved the members more than them. Stephen called his father an actor and said he cared more about other people’s perceptions of him than his own family. Jones always needed the most praise.

10. Peoples Temple Members Who Refused To Drink The Kool-Aid Died In Other Ways

Contrary to popular belief, not everyone drank the Kool-Aid on that fateful day in Guyana. Some of the members refused to drink the potion, especially once they saw people falling to the ground and dying. Frightened children started crying and pleading with their parents to let them go.

Parents started trying to find ways to escape. But, no one could escape from the middle of the compound that day. People walked around with guns, shooting anyone who refused to drink the Kool-Aid. Some people died from knife wounds, while others faced a lethal injection of the drink.

9. A California Congressman’s Visit To Jonestown Pushed Play On The Massacre

Not too long before the massacre, several Peoples Temple members reached out to California. They feared for their safety and complained about abuse from Jones. Congressman Leo Ryan went out to Jonestown to meet with the members. After reaching the members, Ryan decided to take the ones with him who wanted to leave the cult.

As Ryan and others started to leave, gunmen from the People Temple open fire. Ryan’s staffer escaped from the attack. Ryan, three journalists, and other people did not make it out alive. After this incident, Jones knew he had to follow through with his plan.

8. “Don’t Drink The Kool-Aid” Comes From The Jonestown Massacre

Members from the Peoples Temple who lived to tell the stories we know today, state they didn’t always receive Kool-Aid. In fact, many people believe that it was more of flavor aid than a Kool-Aid mixture with cyanide, valium, Phenergan, and chloral hydrate on that fateful November day.

Nonetheless, the statement “Don’t drink the Kool-Aid” comes from the Jonestown massacre. This statement means that you shouldn’t take part in a particular action or follow the crowd. Survivors of the Peoples Temple cringe when they hear this statement. Many ex-members take offense to the saying.

Even though Jim Jones forced most of the Peoples Temple members to drink the poison, he didn’t take part in this. Jones died of a gunshot wound to the head the day of the massacre. To this day, no one knows if Jones killed himself or if one of the members from the Peoples Temple murdered him. Some members, though extremely difficult, escaped through the jungle next to the compound. Some people believe one of the survivors shot Jones as he still had communication with members.