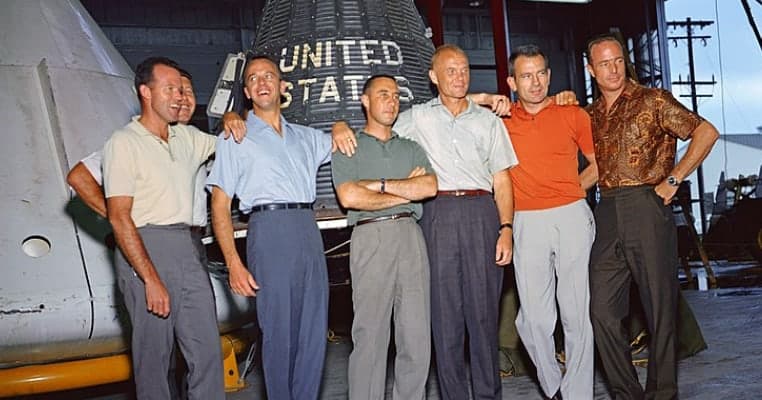 Gemini missions came to an end in November of 1966, and the focus of NASA and the general public was on the growing excitement over Project Apollo and the manned mission to the moon. In 1967 it was clear that the United States was far ahead of the Soviets, and American pride in the Space Program had been reinforced by the successes of the Gemini program, with its frequent launches and the reports to the public which ignored the failures, most of which they never heard of at the time. Gemini veterans Gus Grissom and Ed White were assigned to the first Apollo mission, along with rookie astronaut but veteran pilot (including of the U-2) Roger Chafee. The flight was scheduled to launch in February, with a mission of testing the Apollo command module and the ground support systems.

In January 1967, during a communications test while the capsule was on the launch pad at Cape Canaveral, a fire broke out, which in the oxygen rich atmosphere expanded quickly, splitting the side of the spacecraft, killing the three astronauts, and bringing the space program to a halt which lasted twenty months. For the first time, some of the accidents and potential accidents which had always been a part of the program were revealed as Congress investigated and the newspapers reported their findings. Support for the space program waned as its costs and potential benefits were debated. There was also a growing belief that the Soviets were no longer interested in a trip to the moon, rendering such an effort unnecessary.

18. The Christmas telecast from Apollo 8

In December of 1968, one of the most divisive and troubled years of American history, American astronauts Frank Borman, Jim Lovell, and Bill Anders became the first human beings in history to leave earth’s orbit and travel to the moon. The mission was changed from its original profile, which was to test the Lunar Excursion Module while in low earth orbit, in part because the LEM wasn’t ready and in part because the Soviets sent a mission to lunar orbit and returned, which carried live tortoises, on a spacecraft called Zond 5. US intelligence did not believe that the Soviets possessed the ability to land on the moon, but the flight which carried living specimens prodded NASA administrators to send American astronauts to orbit the moon as a morale builder and public relations boost.

The night before the first lunar mission was launched the astronauts were visited by Charles Lindbergh, a graphic example of how far human flight had advanced in the course of a single lifetime. The mission was far from flawless, but problems encountered were resolved sufficiently for Apollo 8 to achieve lunar orbit. On the evening of December 24, Christmas Eve, with dramatic pictures of the earth being telecast from lunar orbit, the astronauts read passages from Genesis before wishing their audience on earth a Merry Christmas. The mission to orbit the moon was a triumph for NASA, with public approbation of the space program largely restored, and the drive to walk on the moon by the end of the decade was restored.

19. The dress rehearsal took steps to ensure the astronauts wouldn’t land on the moon

Apollo 10 was a full blown dress rehearsal for a lunar landing, including approaching the lunar surface in the LEM, closing to within eight miles before activating the ascent stage engines of the LEM to return to the command module in lunar orbit. Astronauts John Young, Gene Cernan, and Tom Stafford were all veterans of space flight during the Gemini program. A lively discussion developed in the media and among the astronauts regarding the necessity of the dress rehearsal. The argument was along the lines of; Why go so far and come so close without landing? NASA administrators, well aware of the traits of the astronauts, who were likely to find some sort of excuse to go ahead with a landing once they were there, needed to find a means to prevent one.

NASA mission planners ensured that the astronauts in the LEM, Stafford and Cernan, would not attempt to usurp the first landing on the moon by limiting their fuel supply. Well aware that if the astronauts did go ahead there would be no way of disciplining them – they would be international heroes and celebrities – they instead provided only the amount of fuel necessary to return to the command module from their closest approach point. Had the LEM descended toward the lunar surface any further, there was insufficient fuel to get back to the command module. NASA administrators also ensured that the astronauts were fully aware of the nature of their supply. The dress rehearsal was a complete success, setting the stage for the mission of Apollo 11.

20. The goal achieved was the capstone of the American space program

By the end of the decade of the 1960s, the finish line of President John F. Kennedy’s challenge to the nation, four Americans had stood on the surface of the moon and returned safely to earth. Twelve Americans had seen the moon’s dark side with their own eyes. Traveling to the moon had become, in the eyes of many, routine. America turned its attention to other things. Debate arose over continuing the flights to the moon as questions over cost versus benefits attained were asked in the media and in Congress. The first mission of the 1970s was fraught with drama when an accident aboard the spacecraft threatened the lives of the crew, but the Apollo 13 mission ended in a successful rescue which again boosted national pride in the astronauts and their abilities.

The Apollo program was cut short in the 1970s, and national interest in the space program never again reached the level it attained in the drive to reach the moon. Accidents that led to fatalities during space missions, twice affecting the space shuttle, brought the space program and NASA under increased scrutiny and public disapproval. NASA has never since faced a challenge such as the one expressed by John Kennedy, nor the public support for its achievement. Despite enormous successes with unmanned probes and exploration missions, public support for manned missions steadily waned since the successes of the 1960s. Someday Americans, or others from earth, will return to the moon and will travel to other celestial bodies; when that will occur remains unknown.

“For Spacious Skies: The Uncommon Journey of a Mercury Astronaut”. Scott Carpenter and Kris Stoever. 2002

“On the Shoulders of Titans: A History of Project Gemini”. Barton C. Hacker and James. M. Grimwood, NASA. 1977

“Rocket Men: The Epic Story of the First Men on the Moon”. Craig Nelson. 2009