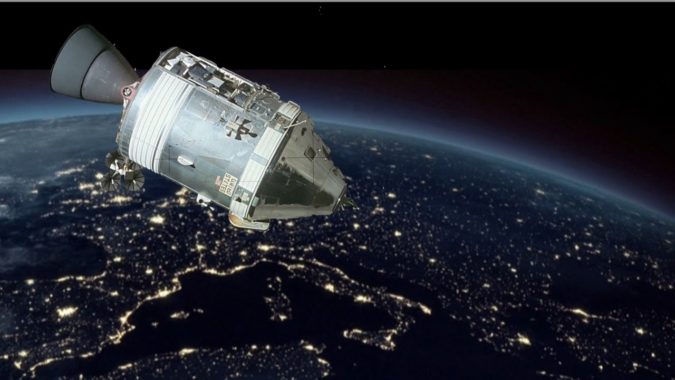 One of the most iconic and well-known sayings that has ever come out of the post-World War II era is “Houston, we have a problem.” And while that was not the exact quote in real life (they did use it for the film adaptation), it did originate with the Apollo 13 mission to the moon.

On April 11, 1970, Apollo 13 launched from Cape Canaveral, Florida. Their mission was to land on the moon, explore the Imbrium Basin, and to collect geological data. This was the third manned mission to the moon.

It was only two days later when the mission went wrong. On April 13 around 9:00 p.m., the crew heard an explosion that turned out to be their main oxygen supply, leading to the moon landing to be canceled. Their main goal then became to get the crew of Apollo 13 back to Earth safely. This is when the famous phrase was sent back to Earth: “Houston we’ve had a problem here.”

In what could have been a terrible disaster, the crew of the Apollo 13 was able to rig a system that allowed them to make it back to Earth safely. It was very dangerous, as they had to cut out and ration essential life support systems, but they were able to use unsuitable backup systems to trek the 200,000 miles back to Earth.

They utilized the landing module’s systems to get them back home, when it was only meant to support two people for 45 hours. They needed it to support three astronauts for 90 hours or more. In order to succeed, they needed to cut down on both the temperature and the water intake. This meant the three crew members would be on one-fifth of their needed water for the return trip, and would suffer through temperatures barely above freezing.

They also had to overcome the landing module’s unsophisticated navigation system. The command module, the main craft and the one that experienced the main problems, had the necessary equipment to get them back to Earth. The landing module did not.

On April 14, the Apollo crew navigated manually around the moon, and back towards home. It took them three days to return home, using manual navigation along with using the sun to point their way. The small landing module engine was barely powerful enough to get them back to Earth, but in the end it did the job.

While the mission was canceled due to the troubles with the command module, the Apollo 13 mission did do one thing well. It showed yet another hazard of space travel. In the 1960s and 1970s, as the Americans raced to beat the Soviets at the space game, many mistakes were made and many accidents occurred. It was with supreme skill and undeniable luck that the Apollo 13 crew made it back home.